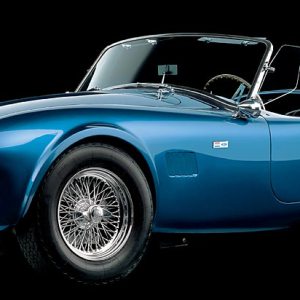 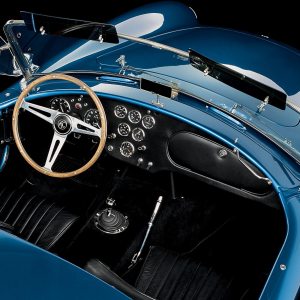 The Shelby Cobra is one of the most copied cars of all time; each year, enthusiasts produce Cobra knockoffs in quantities greater than the 998 original autos that American racer Carroll Shelby built between 1962 and 1967. Ironically, the Cobra itself was a virtual replica of Ferrari’s 166 MM Barchetta. The A.C. Ace, a derivative of the Ferrari, debuted at the 1953 Earls Court London Motor Show. In 1962 the auto’s British maker began exporting the aluminum-body chassis to Shelby, who flared the wheel arches to accommodate wider tires and powered the car with a 260 cu in Ford V-8. Later Cobras, such as the 1964 model pictured here, incorporated a 289 cu in engine. Shelby eventually, and somewhat reluctantly, replaced the 289 with a 427 Cobra. “I was forced to increase power because of Corvette,” Shelby recalls, “but I’d rather drive the 289 around the street than the 427.”