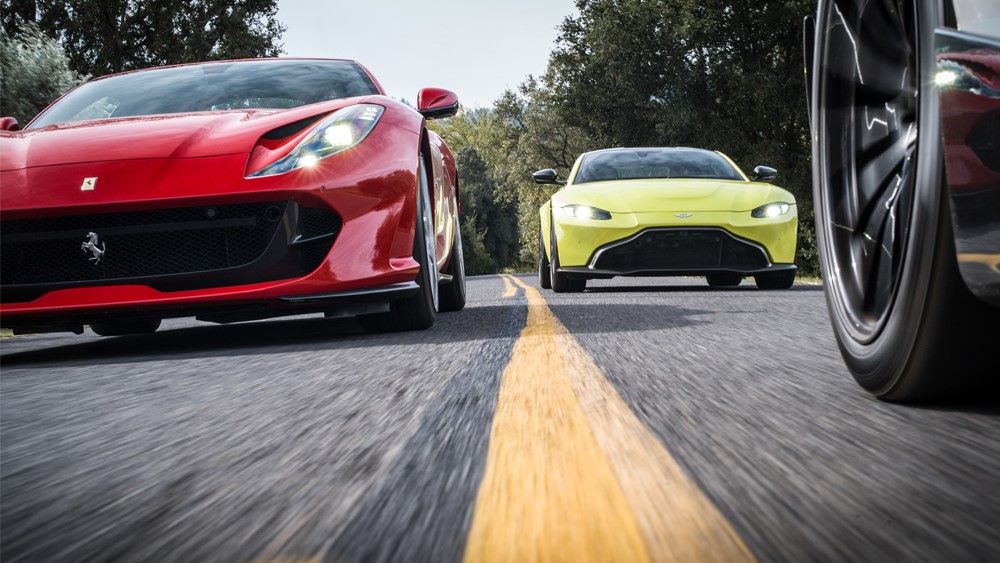 An annual Robb Report event since 2003, Car of the Year (COTY) began as a small gathering of cars and friends, driving Southern California roads and rendering some informal opinions. Over the years and certainly today, COTY has morphed into a bi-coastal series of events in Napa, Calif., and Boca Raton, Fla., involving more than 200 judges, with results published in Robb Report editions around the world.

Who selects the cars, and how? Robb Report’s automotive judges, and the criteria for selection requires that a car be new, not just a minor variation on the previous model. This year, we’ve scaled the competition back to 10 cars, in response to comments that eight-or-so hours was not sufficient time to drive the 13 automobiles that have been our traditional number since 2004. And for the first time ever…no convertibles were among the field. That’s just the luck of the draw, next time could be an entirely different story.

Our mix for 2019 was full of surprises, with new discoveries about performance that make us question whether terms like “sports car” or “SUV” are sufficient to describe the character of vehicles that are, as a whole, simply getting more capable every year. Here are the 10 contenders.

This long-anticipated Vantage catapults Aston Martin out of the automotive Stone Age and brings it face-to-face with the most up-to-date sports cars like Porsche’s 911. For years, the brand had been hamstrung with platforms, engines, and electronics that lagged behind state of the art, but this all-new “entry-level” Aston puts the marque squarely back in the running. Of course, as has been the case since the DBs of yore, nothing looks better than an Aston Martin.

Audis have always appealed to design-types who appreciate classic lines and cars that don’t shout “look at me.” Even older Audis have a timeless aspect about their styling. What’s not timeless is technology, whose inexorable advance brings obsolescence with every new model year. When it comes to advancing the state of the high-tech arts, the new A8 is at the head of its class. From autonomy to connectivity to passive safety, Audi engineers push what’s possible to make the A8 one of the most tech-savvy luxury sedans on the road.

The Audi A8 is top-tier in tech.  Photo by Robb Rice.

Bentley’s Continental has had a darned good run; it was our Car of the Year in 2004, and went through a major update in 2010. But this Continental is an all new model, with a redesigned W12 engine and updated styling that riffs on the rather amorphous original but turns it into a much more sculpted, aggressive GT. The only thing more addictive than the Continental GT’s power is its opulent interior, inviting sybarites to fairly wallow in luxury. Variants will offer hybrid and V-8-power, as well as convertibles across the model range.

This year marks BMW’s first 8-Series since 1999. Like Rip Van Winkle, BMW’s top luxury coupe awakens after 20 years with an all-new look to confer an aura of prestige on the marque whose ever-expanding beltline currently includes 32 models in North America. Optional M Performance and M Sport Packages add sporting character, enhanced by an intelligent all-wheel-drive system favoring the rear wheels when performance is the order of the day. Sun worshippers will appreciate the forthcoming convertible.

It has the most powerful naturally aspirated production car engine ever made, which is a start. If that’s not enough, Ferrari’s 812 is the fastest, most powerful series-production Ferrari in the company’s 70-year history. It’s simply the best GT ever to wear a prancing horse, and maybe the best GT anywhere. The name celebrates Ferrari’s first 4.9 Superfast, a luxurious grand tourer from the late 1950s that made Ferrari famous, not just on the track, but in the driveways of playboys and gentlemen racers everywhere. Some things never change.

The most powerful series-production Ferrari in history.  Photo by Robb Rice.

Lamborghini calls it a Super Sport Utility Vehicle. We call it an answer to a question that everybody asked: when will we get an SUV with a bull on the hood? A Lamborghini off-roader was not without precedent; their 1980s-era LM002 was a wicked beast made for grueling desert action and could even accommodate machine-gun armament. The Urus has a different calling. With a name derived from aurochs, a large, wild—and extinct—Eurasian ox, this 650 hp raging bull means to establish itself as the supercar of SUVs.

The newest model in McLaren’s Sport Series, the 600LT sits right on top of the 570 models and flaunts the LT suffix, which refers to “Longtail”—extended bodywork that confers aerodynamic advantages in extreme driving. Lots of carbon fiber inside and out saves weight, and makes the latest McLaren not just the most track-oriented model in the Sports Series, but one of the most capable sports cars anywhere its owner chooses to unleash it.

During the 1930s, the Maybach Zeppelin defined the pinnacle of German motoring luxury, and today, the Mercedes-Maybach wears that mantle of Teutonic four-wheeled opulence. Essentially an S-Class Mercedes-gone-to-finishing-school, the big V-12 ‘Bach goes like heck, all the while cosseting its passengers in an interior more akin to a quilted adult playpen than an automotive cabin. It’s hard to imagine a better place to be than behind the wheel, except luxuriating in the nether regions of Mercedes’ most elegant sedan.

The 621 hp Mercedes-Maybach S 650 is both powerful and posh.  Photo by Robb Rice.

Is it the most capable sport sedan in the world? Or just one of the most capable Porsches, period? Long and low as a dachshund, the most potent Panamera is a virile hybrid that ladles a little bit of “green” on performance and luxury, all in a unique four-door hatchback design. Though its looks may polarize Porsche purists, once such unbelievers sit in the driver’s seat, they are left with no misapprehension that the Panamera is a pure Porsche, through and through.

Named after the largest gem-quality diamond ever discovered, it is no surprise that the much-anticipated Cullinan SUV is every inch a Rolls-Royce. Whichever way one chooses to employ the Cullinan, whether as a high-riding luxury cruiser or pressed into service as an off-road warrior, this motor car reflects its Rolls-Royce pedigree through thick (mud) and thin. No matter what the job, the Cullinan remains as composed as the Phantom, but is always ready to change from business attire to a Superman outfit when duty calls.

A Rolls-Royce that defines off-road refinement.  Photo by Robb Rice.