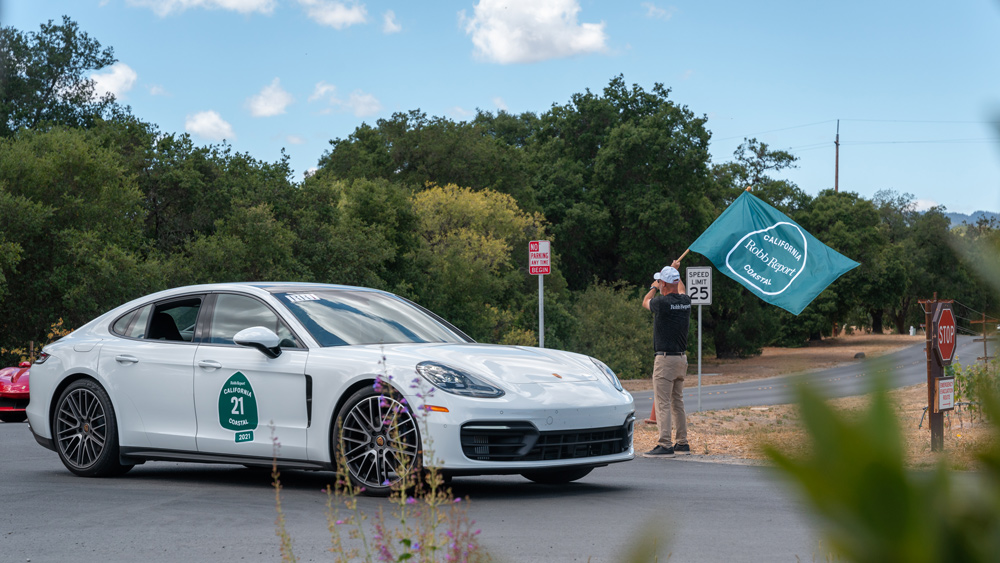 Author Louis L’Amour, famous for his classic tales of the Old West, once wrote that “a journey is time suspended.” As our modern-day, high-horsepower wagon train—that would be the supercars and exotics comprising Robb Report’s 2021 California Coastal road rally—sets off from Northern California’s Bodega Bay, the vista of coastline unfurls before us, rocks jutting from the sea like aberrant teeth.

The final leg of this three-day journey is a 98-mile route that turns inland as drivers navigate through swaths of lushly carpeted hillsides which slowly transition to carefully tended vineyards, the bloodline for one of the world’s premier wine-producing regions: Napa Valley. En route, hundreds of tight curves around precipitous terrain remind drivers why Northern California is justly famous for its driving roads.

An Aston Martin leads the way with a Prancing Horse close on its heels.  Photo by WayUp Media.

Driving a 2021 Bentley Continental GTC, Robb Report RR1 club member Stan Idzi described the latter part of the stretch as “difficult and challenging,” while Russell Potee, behind the wheel of a Rolls-Royce Ghost, found the morning’s section to be “a wonderful way to test the car—it was just the right length.” (Citing the nearly empty roads, Potee also thanked us for “turning off the traffic.”)

But upon entering the 258-acre grounds of the Montage Healdsburg, switchbacks and straightaways gave way to an 11,500-square-foot spa, three dining venues and two separate pools—all the better to help detune the senses after nearly 600 miles of stimulation. Also restorative: a welcoming cocktail reception complemented with pop-up boutiques from Lugano Diamonds and the bespoke tailors of Isaia.

Anyone with foreknowledge of the narrow and technical turns that defined the rally’s final drive portion of the rally would have opted for the car that Craig and Karen Stull of Scottsdale, Ariz., brought for the event: a Porsche 911 GT3. Born from motorsport, the model saw its first iteration in 1999 as the road-going version of the German marque’s GT3 Cup race car.

The Stull’s 2018 example carries a 4.0-liter, naturally aspirated flat-six engine responsible for 500 hp and 339 ft lbs of torque. Managing the power plant is Porsche’s seven-speed PDK transmission, and the combination allows for a top speed of 197 mph and a zero-to-60 mph sprint of just 3.2 seconds. Although the coupe’s straight-line acceleration impresses, it’s the car’s Porsche Active Suspension Management (PASM) system and rear-axle steering that make it a canyon-carver extraordinaire.

“It’s a nice combination of everyday driver and track car,” Craig says. “You still get a lot of noise with gravel hitting the fenders and that sort of thing, because they don’t overdo the sound insulation, but I love that it has the 18-way seats and a lift kit, which we ordered.” For Karen, who, along with her husband, recently earned a racing license, it was all about “becoming one with the car.” Looking back on its performance through the rally, she adds: “It never let me down.”

The gala dinner featured pairings from Penfolds, Australia’s 177-year old wine institution, including the 2018 Bin 704 Cabernet Sauvignon from Napa (paired with grilled asparagus with prosciutto de parma) and the 2018 Bin 149 Cabernet Sauvignon, to complement a dish of braised short rib ragu. The evening’s headliner, however, is the 2018 Penfolds Bin 98 Quantum, a blend of Cabernet Sauvignon from Napa and South Australian Shiraz—a unique dual-country, dual-hemisphere bottling that Penfolds calls “a wine of the world”—paired with honey-and-rosemary-glazed lamb loin.

The 2021 California Coastal rally officially ends with the departure brunch on June 10, but the impression made by the Golden State’s natural beauty will remain—as will the connections made. For Shery Zarnegin, the new tribe she found has been her favorite part of the last few days: “We’ve met at least five people that will be lifelong friends,” she says.