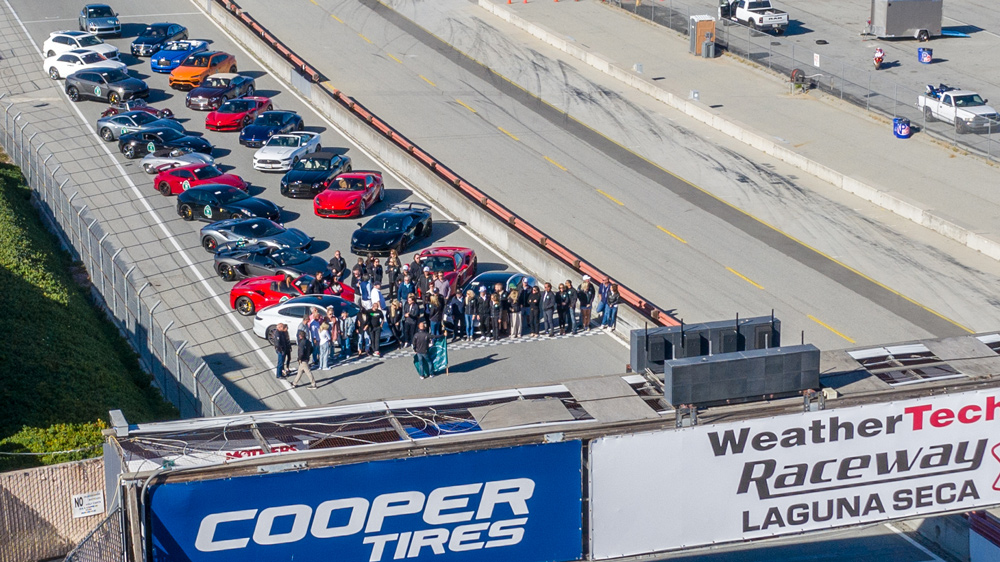 Despite its output, the 12-cylinder power train remains surprisingly quiet as the 2021 Bentley Bentayga Speed accelerates up the incline leading to turn eight at Northern California’s renowned WeatherTech Raceway Laguna Seca. A moment later, the posh SUV drops five stories in 450 feet, hugging a whipsawing combination of turns aptly named the Corkscrew. What’s a 7,165-pound family hauler doing on one of motorsport’s most infamous series of twists? It’s just what can happen on the second day of Robb Report’s 2021 California Coastal road rally.

After the concours-style display in Santa Barbara on June 6, the cadre of nearly two dozen exotic automobiles embarked yesterday morning on a roughly 700-mile scenic tour which departed the Ritz-Carlton, Bacara at 9 a.m. PDT. The route’s preliminary stages were predominantly on highway, the marine layer eventually acquiescing to reveal a sun-dappled landscape along the way.

The first rest stop: the base of 581-foot Morro Rock.  Photo: Courtesy of WayUp Media.

The day’s destination was the Inn at Spanish Bay, a favored basecamp for many devotees of August’s Monterey Car Week and, specifically, the Pebble Beach Concours d’Elegance. But of course there were sights to see along the way. These included the 581-foot Morro Rock and lunch at the Ragged Point Inn and Resort, with vistas of the sprawling coast and the sea’s watercolor hues of turquoise, azure blue and emerald green.

The stunning natural landscape aside, rally participants were focused on the late afternoon’s bucket-list moment: parade laps at one of the most storied racetracks in the country. Built in 1957, Laguna Seca was developed as a dedicated motorsport venue following the open-street Pebble Beach races, which attracted a number of the world’s best drivers of the era but had also resulted in a fatality in 1956.

Some of the California Coastal road-rally crew lined up near the starting line at WeatherTech Raceway Laguna Seca.  Photo: Courtesy of WayUp Media.

“When you come to Laguna Seca, you can feel the spirit of sports-car racing,” says Barry Toepke, director of Heritage Events here. “You can sense the spirit of all the legends who have been there before: Sir Stirling Moss, Jackie Stewart, Mario Andretti and Dan Gurney . . . they’ve all driven this track,” he says.

Since departing Santa Barbara, one Prancing Horse has consistently caught the eye: a 2019 Ferrari 812 Superfast owned by Michael Sisk and his wife. Introduced in 2017, the rear-wheel-drive model touts 789 hp and 529 ft lbs of torque from its 6.5-liter V-12 engine, output that allows the grand tourer to cover zero to 62 mph in 2.9 seconds and top out at 211 mph.

“Even though it’s an incredibly complex car, it’s very simple to drive” says Sisk, a longtime Lamborghini owner who notes that this is his first Ferrari. “I call it sheepishly quick; you don’t realize how fast it is until you look at the speedometer—it’s just smooth-fast. And it’s a front-engined car, which is the big difference. I’m an old Corvette guy from back in the day, so being able to buy an exotic with a front engine makes it cool.”

After the signature bagpiper strode across the grounds of Pebble Beach’s fabled Inn at Spanish Bay, the sound of clinking glasses signaled the start of the four-course dinner, preceded by an hors d’oeuvres selection of seared ahi tuna, potato croquette with bacon and Applewood smoked cheddar and chicken confit croquettes with sriracha aioli.

Dining at dusk on the lawn of the Inn at Spanish Bay in Pebble Beach.  Photo: Courtesy of WayUp Media.

The evening’s featured vintner was Cuvaison, one of the original wineries in Napa, founded in 1969. Cuvaison’s 2019 Sauvignon Blanc, En Cigare, was partnered with the papa pomodoro starter, followed by the winery’s 2018 Pinot Noir, Adda, accompanying English pea risotto with pancetta-wrapped diver scallop. For the main course, osso bucco was mated with Cuvaison’s 2018 Merlot, Arcilla, before the culinary experience culminated with lemon panna cotta and blueberry compote paired with the winery’s 2017 Brut Rosé, Méthode Champenoise.

“Cuvaison has been around over 50 years,” says Dan Zepponi, CEO of Cuvaison. “We’re a single-vineyard estate that’s certified sustainable, solar powered, and that’s what we really believe in. Let the land tell the story, but you have to take care of the land and respect it, and that’s what we’re doing.”

There’s no rest for the weary as engines fire up at 7:30 a.m. PDT on June 8. A slow roll through renowned 17-Mile Drive, with breakfast at its Beach Club, will be the first fuel stop before a much-anticipated visit to racer Bruce Canepa’s automotive museum and restoration facility. It’s there that a peek at one of his approximately $2 million Porsche 959 restomods may inspire a new buyer or two.