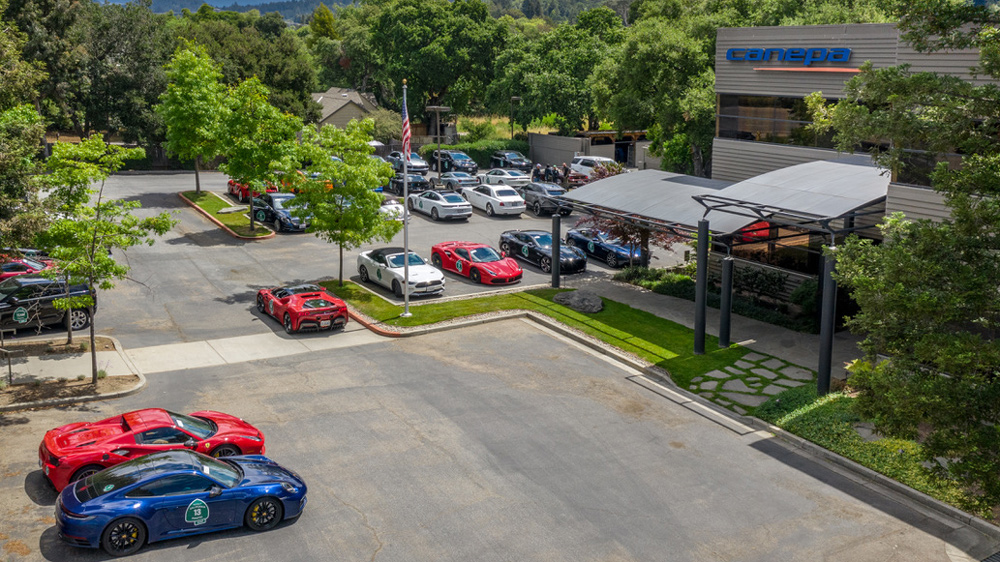 The pristine example of a 1967 Shelby Cobra 427 seems to dare you to touch it. Presented in Vineyard Green with a black interior, the seven-figure roadster appears nearly flawless but, then again, so does the sky-blue 1964 Porsche 356 C Cabriolet. And the white 1959 Lister Costin Jaguar. Considering that trio alone, the first-floor display space for acclaimed racer and restorer Bruce Canepa’s collector cars, all for sale, makes you feel like you’ve just stepped out of a time machine.

Drivers were instructed to depart Northern California’s Inn at Spanish Bay by 7:30 a.m., then wind through the region’s scenic 17-Mile Drive en route to breakfast at the Beach and Tennis Club at Pebble Beach. Fueling up, both for the cars and their drivers, was key, as the day entailed nearly six hours of driving.

After cruising north and inland for about an hour, rally participants arrived at Canepa for a guided tour from the man himself, who walked everyone through his personal pit lane of memories—including the first sprint car he competed in.

“Sprint cars were the most fun to race,” Canepa related. “But with sprint cars you get hurt. In a six-year window I had four concussions, a skull fracture and broken bones, because that’s how those cars are. If you’re going to go fast in them, you’re going to get upside down in them. I used to tell people that the steering wheel was really just for hanging on to when you flipped over.”

Most impressive, perhaps, was the peek behind the curtain at Canepa’s current automotive projects, especially his reimagining of the Porsche 959. Produced between 1986 and 1993, the all-wheel-drive model was a innovation tour de force, providing the template for numerous successors when it came to engineering and onboard tech. Unfortunately, the model was never made available in the US—something Canepa eventually decided to rectify.

Canepa’s reimagined Porsche 959s in the process of transformation.  Photo by WayUp Media.

“I brought the first 959 to the United States [but] they weren’t legal so I had to bring them in on a tourist visa, with my sponsor from Europe,” he says. After confronting numerous roadblocks to importing them to this country, he joined forces with a law firm in D.C. that had decided the only way to remove the barrier was through legislation. “In 1998, we were a rider on the Senate Transportation Bill, and the rest is history,” Canepa says. “As soon as that law was passed—it was called Show or Display—it allowed a number of cars into this country that would otherwise never be here.”

Each of his reimagined Porsche 959SC examples starts with an original donor car in good condition. It’s then completely deconstructed, refurbished and enhanced to produce 850 hp and 650 ft lbs of torque—a whopping boost of 406 hp and 281 ft lbs from the original specs. On average, each transformation takes 4,300 hours of labor and comes priced at more than $2 million.

Although some in the group could have stayed all day talking shop, it was time for a return to Pacific Coast Highway and a lovely drive up to San Francisco, crossing the Golden Gate bridge to have lunch overlooking the bay.

A bird’s-eye view of the Golden Gate Bridge and San Francisco from Hawk Hill.  Photo by WayUp Media.

The day’s final stage was also the most spectacular, from both a visual perspective and for driver engagement. High above the ocean and with stunning views at every turn, the smooth coils of empty road offered plenty of opportunity for drivers to engage with their vehicles’ unique handling characteristics, which made for plenty of stories to share once everyone finally shifted to cocktails and dinner at Bodega Bay Lodge, Tuesday’s final waypoint.

Bodega Bay Lodge from above.  Photo by WayUp Media.

As its name indicates, the 2003 Morgan Plus 8, 35th Anniversary Edition, pays tribute to the small British automaker’s original 1968 version that carried a Land Rover V-8 engine and featured a hand-built wood frame on a steel chassis. Invoking a bygone era, this handsome example has nonetheless held its own among a field of more contemporary and muscular sports cars.

Carrying a 200 hp, 4.0-liter V-8 that makes 210 ft lbs of torque, the roadster is an ideal driving companion according to owner Michael Levine. “It’s really effortless and light, with amazing acceleration because of the torque, both bottom end and top end through all five gears,” notes Levine. “It’s actually the easiest of any car I’ve ever driven.”

Leisure is the theme for the last drive day on June 9, with a 10 a.m. start and a relatively short route from Bodega Bay to Napa’s 130-residence Montage Healdsburg. And with an estimated arrival time of early afternoon, there’s every reason to enjoy the scenic drive.