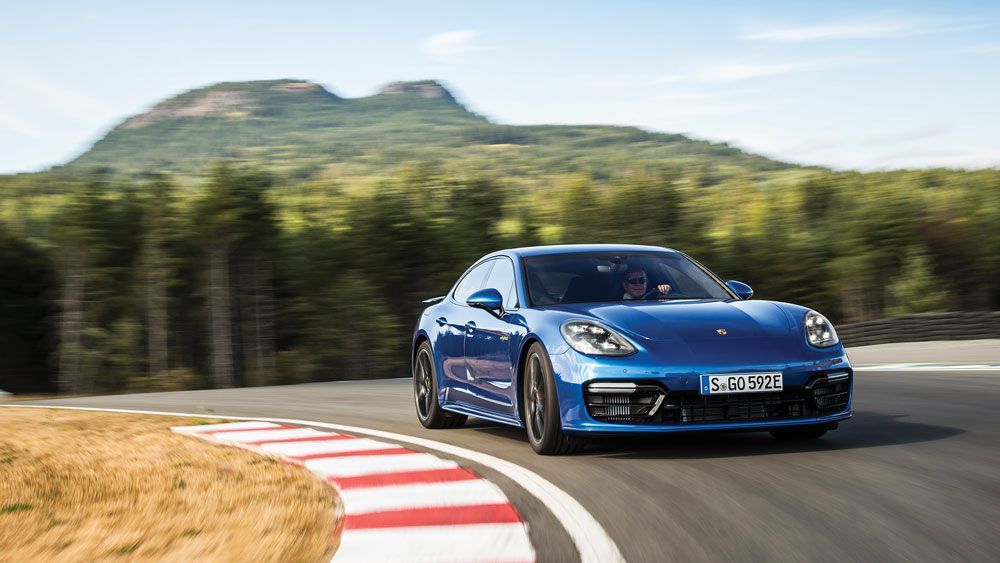 When the Panamera arrived on the scene 8 years ago, purists scoffed at the idea of a four-door, front-engine Porsche (mostly the same naysayers who bemoaned the Cayenne SUV’s introduction a few years earlier). Soon, though, the car was outselling large luxury sedans made by Maserati, Bentley, and Aston Martin combined. Porsche knew that, as with its SUVs, there was a market for a sporty, performance-oriented car with room for a family. Now the marque has unveiled its fastest Panamera ever—a plug-in hybrid, no less—along with a new-body-style version that gains even more practicality without sacrificing looks. The Panamera Turbo S E-Hybrid (from $184,400) takes inspiration—and a boost function—from the 918 Spyder. Porsche calls it the new flagship of the Panamera lineup, with its 4.4-liter, biturbo V-8 engine and 100 kW electric motor that combine to produce 680 hp and 626 ft lbs of torque. All of the components work in symphony to propel the car from zero to 60 mph in 3.2 seconds—a rate of acceleration on par with the newest Aston Martin Vanquish S, the Bentley Continental GT Supersports, and the Mercedes-AMG E63 S Wagon.

The car is just as much a handful to drive as its name is a mouthful to say. We tested the Turbo S E-Hybrid’s chops at Vancouver Island Motorsport Circuit, a private racetrack nestled in the forest about an hour northwest of Victoria, British Columbia. Compact and highly technical, the track boasts 19 turns and dramatic elevation changes in just 1.4 miles—a layout better suited to a 911 than a 5,100-pound four-door. The Panamera, however, managed the corners with the help of systems such as PTM (Porsche Traction Management) and PSM (Porsche Stability Management—or, as our driving instructor called it, “Please Save Me”). Over blind crests and around late-apex turns, the car stayed settled. Gear changes were imperceptible, courtesy of a new version of Porsche’s 8-speed, dual-clutch PDK transmission paired with an electric clutch actuator. And the brakes bit hard, with standard carbon-ceramic rotors and lime-green calipers—another tip of the hat to the 918 Spyder.

The Turbo S E-Hybrid’s zero-to-60-mph time is no doubt impressive, but the real pin-you-to-your-seat moments come at higher speeds. The car’s boost technology helps propel it from 62 to 125 mph almost a full second faster than the conventional Panamera Turbo (although we ran out of straightaway to really put it to the test).

Different drive modes take the plug-in hybrid from electric daily commuter to all-out track car. By default, it starts up in pure electric mode, but the gas engine will kick in when you push down hard on the accelerator or when the car is running low on battery reserves. (On electricity alone, the Turbo S E-Hybrid can go about 30 miles.) With a turn of the mode switch on the steering wheel, the driver can also select Hybrid Auto mode, which automatically transitions between gas and electric for optimum efficiency. The E-Charge mode favors the gas engine to help charge the battery, while the Sport and Sport Plus selections use the gas engine continually, with an electric boost when needed.

Porsche is famous for its long list of options that can add tens of thousands of dollars to a sticker price, but the Turbo S E-Hybrid comes standard with the Sport Chrono package, dynamic chassis control, ceramic brakes, Torque Vectoring Plus, Active Suspension Management, and 21-inch turbo design wheels. Also included is auxiliary cabin climate control, which can precool and heat the car via a timer or remotely with its smartphone app (also compatible with the Apple watch). For the most part, the cockpit is identical to those of its Panamera siblings, with the exception of some displays specific to the plug-in variant.

Among the Turbo S E-Hybrid’s siblings are four new Panamera Sport Turismo models (from $96,200). Known to Europeans as shooting brakes, the cars could, theoretically, be called wagons—although the description seems vulgar for such an elegant design. The Sport Turismo looks, in many ways, as a Panamera should have always looked. Its voluminous rear brings its proportions into harmony, complementing the long wheelbase.

Ferdinand Porsche, the marque’s founder, once said, “Design must be functional, and functionality must be translated into visual aesthetics without any reliance on gimmicks that have to be explained.” The Sport Turismo’s functionality is obvious, with increased space and a lower trunk floor for easier loading and unloading. Yet despite Ferdinand’s dictum, the vehicle employs some design cues that are worth explaining. It has a slightly different rear-end design compared to the latest sedan, new extended wheelhouses, and a new integrated roof spoiler—featuring active aerodynamics—with three positions to adjust downforce as necessary.

Adhering to the basic design criteria for all Porsches, the Sport Turismo’s centerline is lowered compared to the fenders, and its narrow waist highlights the hips. The bigger dash-to-axle ratio evokes memories of the 928, a milestone car in Porsche’s history, and the longer roof is supported by a dynamic D-pillar that lightens the mass of the rear overhang. Several elements pay homage to the 911, including rear wheels that hug the ground thanks to elongated, muscular lines in an “anti-wedge” shape. And the rear light hearkens back to the 911 G model, produced from 1974 to 1988.

Under the hood are many of the same engines offered with the sedan, save for the Panamera Turbo S E-Hybrid’s. We savored the Turbo Sport Turismo model on the winding back roads of Vancouver Island, kicking up dust and listening to that amazing exhaust sound. More open space in the rear of the car usually equates to more noise in the cabin, but in this case, the engineers did a superb job quelling any additional ambient sound.

The Sport Turismo models also offer ample rear headroom and legroom. And unlike the Panamera sedan—which exclusively uses a 2+2 layout—the shooting brake can be equipped with a bench seat to accommodate three rear passengers.

In all, the new Panamera Turbo S E-Hybrid and Sport Turismo models are the perfect complements to Porsche’s existing array of cars, offering not only increased utility but also the cool factor of driving something unusual in a world full of staid SUVs. Curmudgeonly purists, you’ve been warned.

By the Numbers: Porsche Panamera

4 Number of Panamera Sport Turismo variants available in the States

198.7 Length of the Panamera Sport Turismo, in inches

49 Cubic feet of maximum cargo space in the Sport Turismo

110 Additional pounds of downforce created by the Sport Turismo’s roof, which transforms into an adaptive spoiler

192 Top speed of the Panamera Turbo S E-Hybrid, in mph

12:06 Record-breaking lap time, in minutes, set by the Panamera Turbo Sport Turismo in December 2017 for towing a trailer around Germany’s Nürburgring racetrack