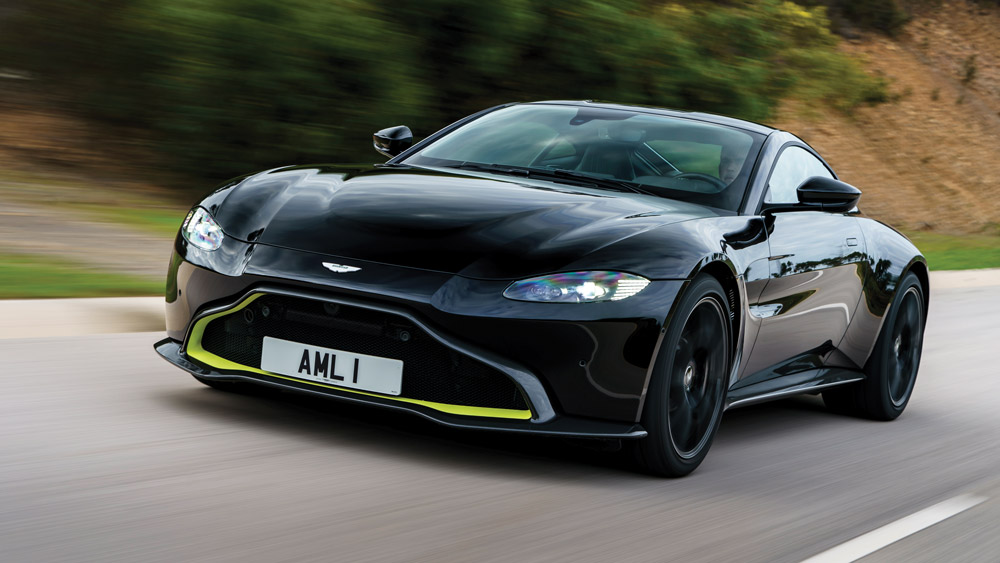 The brand-new Aston Martin Vantage fully inhabits the latter category. The totally reengineered coupe forges a new style for the marque, flouting overt musculature inside and out. There’s no quiet reserve here—this is a fiery, two-seat sports car that speaks loudly and carries a big stick.

Beneath the exterior’s bravado lies engineering that places the Vantage alongside such greats as the Porsche 911. The company has teamed with Mercedes-AMG, which has gifted its classic twin-turbo V-8 engine, this time delivering 503 hp and 505 ft lbs of torque. The motor snaps and cracks at start, but gives rise to a howl as the rpms rise. It’s a great engine, especially teamed with a ZF eight-speed-torque-converter transmission, which moves the Vantage easily around town but meets every quick-shifting, sporting challenge. While it’s not yet available, a manual transmission will also be an option welcomed by purists.

Another new focus is the suspension. The firm has hired Lotus’s former chassis aficionado, an English chap named Matt Becker, who talks about movement and fluidity like a world-class sommelier speaks about the nose, legs, and finish of a Château Lafite Rothschild. Becker’s team started with an ideal 50/50 weight balance, and also outfitted the Vantage with a very modern electronic rear differential and torque vectoring. As for the steering? It is nothing short of brilliant.

That attention pays off in the car’s ability to flow down a serpentine road with a soulful rhythm. This isn’t the remote, effortless feel of many new sports cars, but rather the old-world connection of a fine tool in need of an attuned master—in this case, the very lucky driver. As for the interior, it too gets a serious makeover, trading pretty elegance for overt functionality.

All those features—and its aggressive appearance—help make the Vantage the new bad-boy prince of automotive performance. (from $150,000)