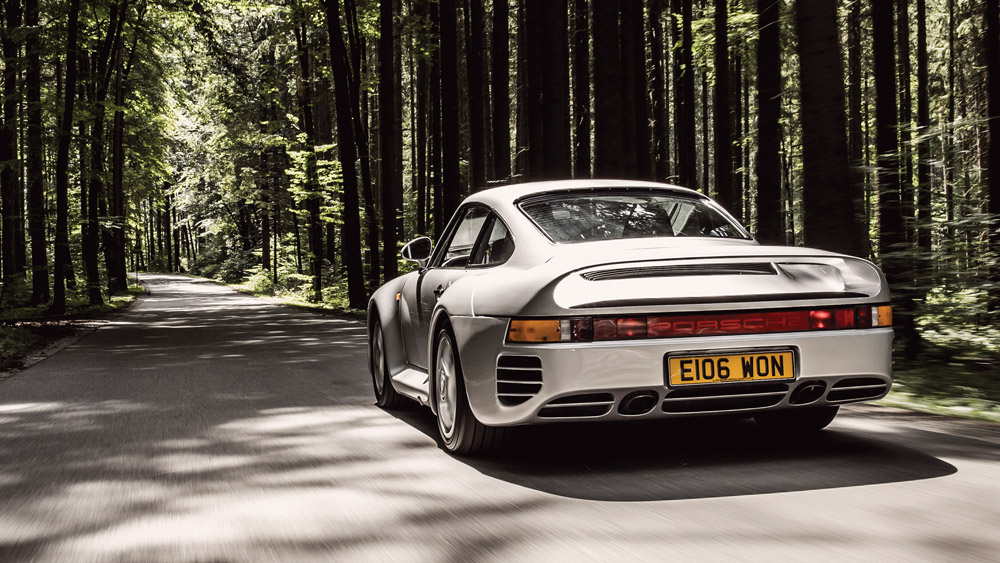 Three decades ago – long before the invention of today’s ubiquitous SUV – all-wheel drive was a technology nearly absent on all but the most serious off-road vehicles. Yet, a few early adopters wanted the advantages that putting power to all four corners afforded—not just for mud-slinging brutes but for high-performance rally cars and even road-going sports models. And although the Audi Quattro debuted in 1980, it is probably the Porsche 959 that will be remembered as the high watermark of early all-wheel-drive sports cars. Make that supercars.

The 959’s immediate predecessor was a Group B rally car that debuted as the 953, a heavily modified variant of the 911 developed for—and taking overall first place in—the grueling 1984 Paris-to-Dakar Rally. Its look and stance would have made it very much at home terrorizing other vehicles in the film Mad Max, but the ungainly monster evolved quickly into the gorgeous 959, of which about 292 examples were manufactured from late 1986 to 1988, with reportedly a handful more made in 1993.

The approximately $265,000 car (it was never imported to the United States) overachieved on all fronts and was without doubt the most advanced vehicle of its decade. And while its 196-mph top speed was impressive, its real impact was the trickle-down technology of an all-wheel-drive system that immediately saw application in the 1989 911 Carrera 4 (known as the 964 series), a real-world sports car that represented the first of a new breed of 911s.

A revelation then, all-wheel drive is regularly available in the 911 model lineup of 2018, and some drivers wouldn’t be without it. Although a 959 may be out of reach, the brand-new, three-volume publication, Porsche 959, by Jurgen Lewandowski is a must-have for serious admirers. Published by Delius Klasing and limited to 2,500 copies, it is not just a literary monument to this Porsche icon but a piece of art unto itself.