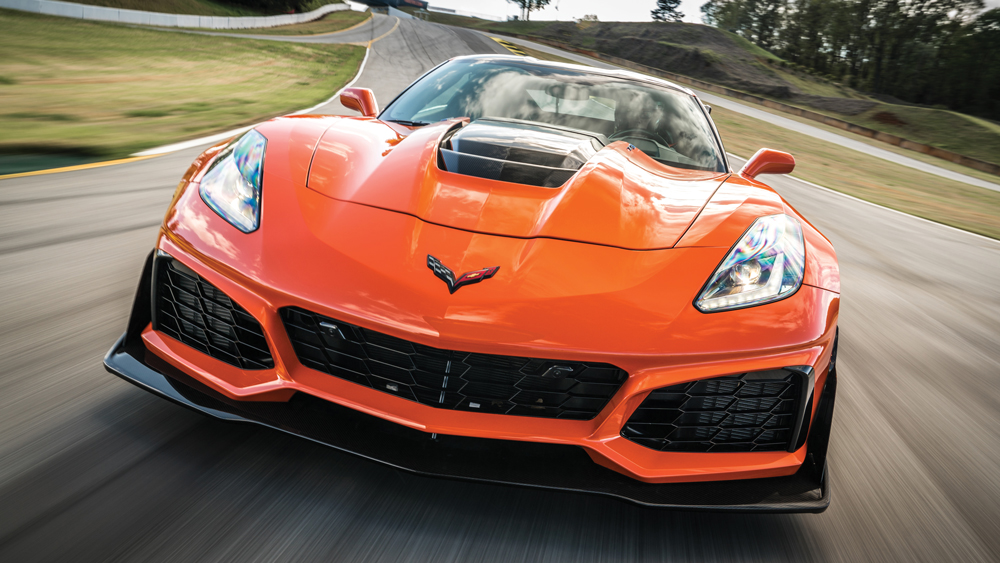 Everyone knew it was coming, and the Corvette crowd has been simmering with anticipation for a ZR1 ever since the seventh generation of “America’s Sports Car” was introduced as the Stingray for the 2014 model year. A potent and delightfully wicked Z06 followed, but the almighty ZR1—the previous generation of which was a genuine monster—remained a chimera until it broke cover at the Dubai Motor Show in 2017 as a 2019 model year offering (never mind that it went on sale in spring of this year).

Its 212 mph top speed and output of 755 hp—with 715 ft lbs of torque–make the ZR1 the fastest and most powerful production Corvette ever. It’s also one of the highest-tech sports cars on the planet, with razor-edged styling and stratospheric performance at a price that’s anything but.

An all-aluminum frame and magnetic-ride suspension underpin the essence of the ZR1’s soul, and plant it on terra firma with an aero package that includes a front underbody splitter and front spoiler, and a prominent fixed rear wing.

Tucked under the “business end” of the ZR1 is Chevrolet’s 6.2-liter, pushrod LT5 V-8 engine spinning a 2.6-liter Eaton supercharger that that expresses its anger through a quartet of fat, round exhaust tips exiting rear center. Speed demons get a choice of an eight-speed automatic, paddle-shift transmission or—bless their souls—a seven-speed Tremec manual that matches revs to let even the most flat-footed poseur shift like a pro. Despite a solid heft of more than 3,500 pounds, the ZR1 is a real pavement scorcher, with a zero-to-60 mph time of around 3 seconds and all that fat torque served up from down low in the rev range.

The 3ZR Package adds luxury amenities inside and out, and the aggressive composite bodywork can be made even more ominous with the ZTK Performance Package, which includes an even higher, rear stanchion-mounted carbon-fiber wing and carbon-fiber front-splitter end caps for added downforce. Special Michelin Pilot Sport Cup 2 tires come with the ZTK option, and replace “standard” Michelin Super Sports.

With stats and specs comparable to—or exceeding—those of many European machines several times its cost, the Corvette ZR1 is for purists who appreciate value but are unwilling to compromise performance on any front. (from $119,995)