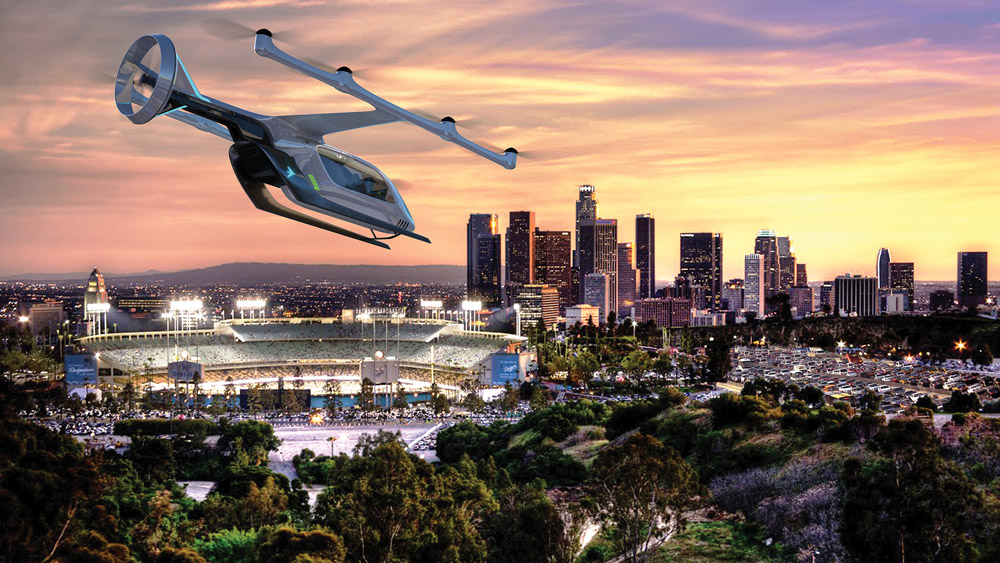 Dreams are often rooted in some semblance of reality, as evidenced by San Francisco–based industrial artist George Yoo’s P97K racecar concept. “The inspiration came from the Porsche 917K that competed at Le Mans in 1971,” he says. “Its lean and wide proportions were out of this world for the time—and still today. It always reminded me of the ultimate spaceship on wheels, and I wondered what a future iteration would look like.” For his homage to motorsports,Yoo envisions a chassis and body of carbon fiber, an electric powertrain, the integration of artificial intelligence to help with handling,and an innovative pilot perspective.“I kept the same single-driver greenhouse cabin from the original but put the occupant in a more aggressive headfirst position to give the feeling of being thrusted forward.” Although the vehicle remains vaporware, the designer’s hope hasn’t dissipated. “I believe it’s just a matter of time and technology.”—Viju Mathew

Concept: eVOTL
Designer: EmbraerX
Odds of Production: We may be hailing flights by 2023

At the Uber Elevate Summit in May, Brazilian aerospace giant Embraer presented a new electric vertical-takeoff-and-landing (eVOTL) aircraft concept developed by EmbraerX, a subdivision tasked with developing disruptive businesses. The futuristic vehicle utilizes eight quiet electric rotors lining two struts mounted perpendicularly to the wings to take off and gain altitude. Once at the appropriate height, a large propeller mounted to the back of the craft provides forward momentum. The concept is designed to carry four passengers and will be flown by a single pilot. However, at the conference, Embraer CEO Paulo Cesar de Souza e Silva alluded to autonomous flight being the ultimate goal. So how soon will the sky be buzzing with flying taxis? Uber wants to start demonstration flights in 2020 and roll out its on-demand flight service by 2023—potentially using Embraer-developed eVOTLs as well as designs from other partners. But, as with any transportation revolution, infrastructure is key. As Silva explains, “It’s a vision about the future. And in order to make this vision work, of course, we need the support and the participation of many, many stakeholders.”—John Lyon

Stealth yachts are not new, but some builders have put a new spin on the classic vessels. Baglietto’s 64-foot Ridoc looks like an ultra-modern PT boat, while Tactical Custom’s 77 yacht in build has a mini-destroyer profile. Though cool, they are bathtub toys compared to the 213-foot superyacht concept, appropriately named Roswell, by Monaco-based designer George Lucian. Borrowing from naval stealth vessels, Roswell’s sharp angles and reflective surfaces give it a discreet radar footprint for avoiding detection. At the same time, it will be the yacht everyone wants to see in port.

Despite the minimalist, military look, Lucian didn’t skimp on the yacht’s amenities. Roswell has a full-beam covered swimming pool, a bridge deck with a helicopter platform, and a skylounge. Lucian envisions the forward area (covered but open along the sides) being the main living space on Roswell, connected by huge glass doors to a loft-like, open-plan saloon and aft cockpit area. It will have quarters for 12 guests and 12 crew. Roswell will be electric, with solar panels across swaths of the top and stern to power the house systems. Diesel-electric engines will make it not only ultra-fuel-efficient but virtually silent in electric mode, like a real stealth vessel. —Michael Verdon