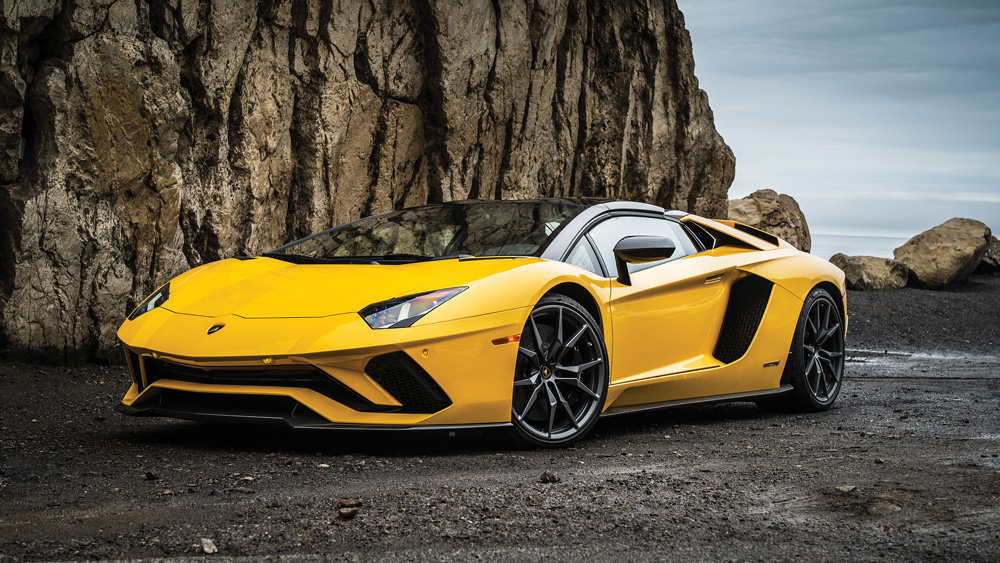 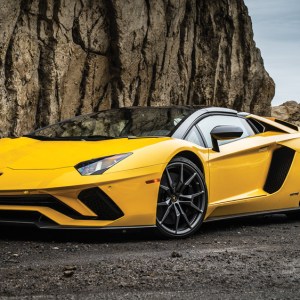 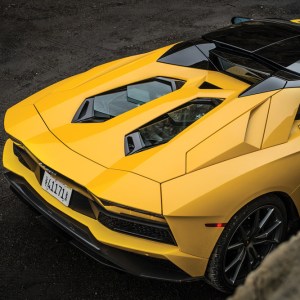 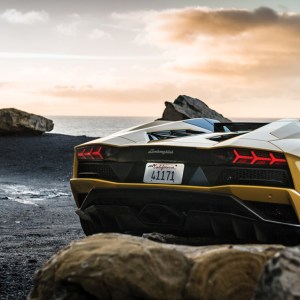 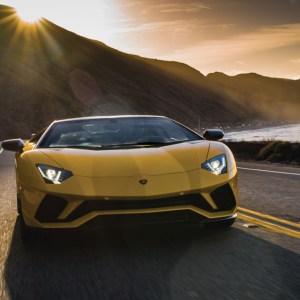 The return to a childhood home can be anticlimactic, as one’s place in the community’s collective consciousness may often subside with time and tide. Then again, it also depends on the wheels you roll up in. I found that out on a recent test-drive around the stomping grounds of my youth, when the rearview revealed a swarm of schoolchildren—armed with camera phones—chasing me with a persistence and pace usually reserved for ice cream trucks. But it wasn’t my photo they wanted to capture; it was the new Lamborghini Aventador S Roadster I was wearing. Italy’s high-performance marque, based in Sant’Agata Bolognese, has generated this level of fervor for generations. It began when founder Ferruccio Lamborghini unleashed his first raging bull for production, the 350 GT coupe, in 1964. Its convertible counterpart—the 350 GTS designed by Carrozzeria Touring—debuted the following year and boasted 320 hp, 276 ft lbs of torque, and a top speed of 155 mph. More than a half-century of advancements later, the Aventador S Roadster (starting at $460,247) enters the ring. But while its DNA is undeniable, this Lambo seems light-years ahead in design, power, and performance.

“The Aventador carries the Lamborghini heritage forward and was heavily influenced by the Countach, sharing distinctive design cues with the iconic supercar, including its aerodynamic monoline, low profile, and characteristic wheel arches,” says Mitja Borkert, Lamborghini’s head of design. According to Borkert, the latest variant elevates the line even further: “Aircraft inspired, the Aventador S Roadster drives like a fierce fighter jet for the road and is marked by a velocity like no other.”

Fancying some flight time for myself, I waited anxiously as a flatbed lowered the example on loan—the adult equivalent of having Disneyland delivered to the door. Fittingly, the car—dressed in a shade of yellow dubbed Giallo Orion—looks like it belongs inside the ride Space Mountain. Even in Southern California’s supercar-saturated town of Malibu, the launch point for my two-day getaway, I drew attention like a tractor beam once behind the wheel.

The open-top torpedo is of carbon-fiber monocoque construction—with aluminum front and rear frames—wrapped in a body made from the same combination of materials. Measuring 15.7 feet in length but only 3.7 feet in height, the angular automobile has a mako-shark profile complemented by a menacing nose, distinctly defined air ducts, and a piercing front splitter. The razor-like centerline leads past recessed flanks to enlarged air intakes, and then on to the redesigned back and its active rear wing. These accents add up to a 130 percent increase in downforce at the front compared to the standard Aventador coupe, and a 400 percent improvement in efficiency (when the wing is ideally configured) during low-drag conditions.

To take advantage of such aerodynamic acumen, the vehicle comes with equally impressive engineering. Veering away from Zuma Beach, I let the mid-rear-engined roadster run free through the Santa Monica Mountains, its naturally aspirated 6.5-liter V-12—with 509 ft lbs of torque—roaring approval. Reining in the 740 horses is a seven-speed Independent Shifting Rod (ISR) transmission that’s able to transition between gears in 50 milliseconds. The power-train configuration catapults the 3,582-pound (dry weight) convertible from zero to 62 mph in three seconds flat before it reaches a top speed of 217 mph. Nothing near that last number appeared on the digital dash, however, on account of the heavy highway-patrol presence and my aversion to incarceration.

But the car doesn’t only stand out on the straightaways; its state-of-the-art steering technology and active suspension help charm snaky passes with grace. In addition, the open-air Aventador S offers four drive modes: Strada (street), Sport (performance), Corsa (track), and the aptly named Ego. The latter allows the pilot to fine-tune settings for personalized handling dynamics.

Before uncoiling the coastal Latigo Canyon Road, I removed the roadster’s two roof panels (safely storing them in the forward luggage compartment), selected Sport mode, and switched to manual so I could play with the paddles. The car traced the twisting, unforgiving descent with startling ease—all while predominantly in third gear. Confidence in the curves is bolstered by four-wheel steering, which premiered on the marque’s production models with the Aventador S coupe. The system improves lateral control and works in conjunction with the Lamborghini Magneto-rheological Suspension (LMS) and new variable damping capabilities. The result is a constantly self-adjusting translation of torque, traction, and turning response based on ever-changing conditions and driver input—no small task for the development team to take on.

“One of the primary engineering challenges with the convertible was continuing to guarantee the stiffness in the chassis despite the increase in handling behavior due to the four-wheel-steering system,” says Maurizio Reggiani, Lamborghini’s chief technical officer, “and all without compromising comfort.”

As mandated by Murphy’s Law, it drizzled on my last day with the roadster, but at least I was able to witness firsthand how successful Reggiani and his retinue had been. The convertible—sporting carbon-ceramic brakes, Dione 20-inch forged alloy wheels (21 inches at the back), and Pirelli P Zero tires—displayed precision on par with a slot car, both on slickened climbs and while cruising the 101 freeway north to Santa Barbara.

It was there, at the apartment complex of my parents, that the pint-sized paparazzi caught up with me. “Oh my god, it’s a Lamborghini! I haven’t seen one of these in my entire life!” exclaimed a small boy, both hands slapped to his forehead in delight and dismay. Kid, after experiencing the Aventador S Roadster, I feel the same way.

9 Time to accelerate from zero to 124 mph, in seconds

3 Number of possible positions for the rear spoiler

Although the Aventador S Roadster’s first ancestor, the 350 GTS, had only two examples made, another predecessor has become more prized—a unique variant of one of Ferruccio Lamborghini’s favorite models, the Miura. The marque’s namesake once referred to the Miura as “a sports car for the young at heart who want to go like hell and love to be seen.” There’s no better way to increase visibility than by leaving the top off altogether.

The one-of-a-kind Miura Roadster concept features a body designed and constructed by Carrozzeria Bertone. Debuted at the European Motor Show Brussels in 1968, it was inspired by the original P400 version of the innovative supercar but with considerable redesign and reinforcement.

Inspired by the Miura P400, the 350 hp Miura Roadster debuted at the European Motor Show Brussels in 1968.  Photo: Lamborghini

The 350 hp performer, presented in light metallic blue with a white-and-red interior, danced around the event circuit before being acquired by the International Lead Zinc Research Organization and modified with components made from those materials for advertising purposes. Now back to factory condition and under private ownership, the Miura Roadster has received awards at the concours of Pebble Beach and Amelia Island.