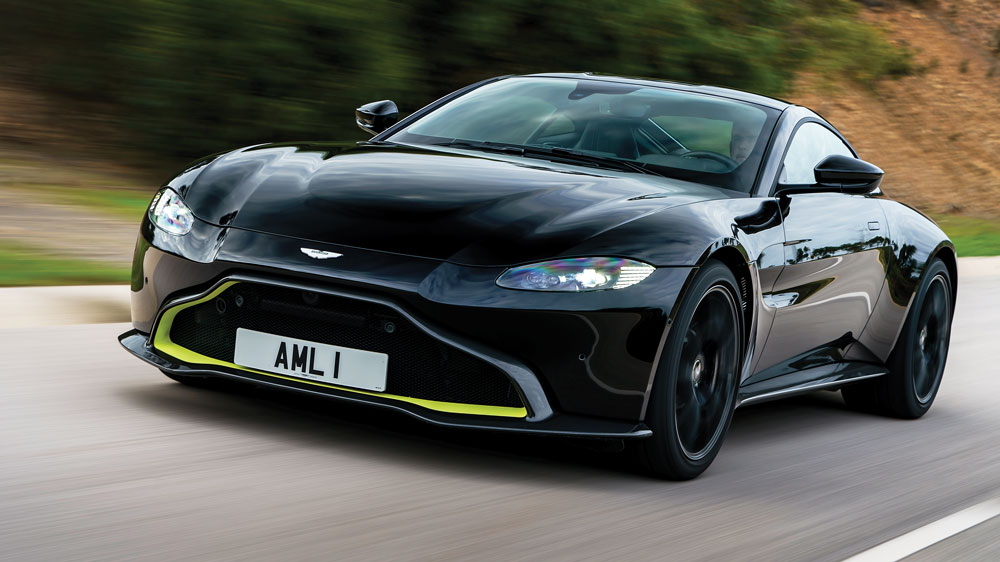 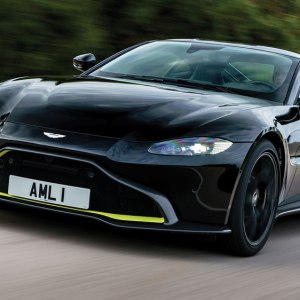 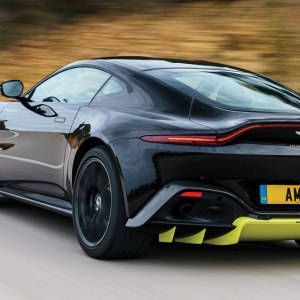 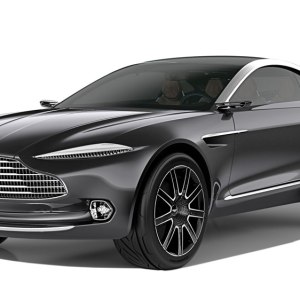 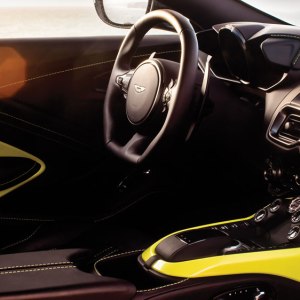 In the hills of normally sunny and dry southern Portugal, a spectral fog curls around forest trees and sheets of rain cascade from the sky, causing the road to glisten with tiny rivers. The drumming bass of an engine booms through the patter of precipitation, rising to a brassy shriek as a black Aston Martin explodes around a corner, a vortex of wind and wet shedding off its flanks. Then it’s gone. It is the British marque’s 2019 Vantage sports coupe. I’ve got my own example parked on the side of the road, where I’m snapping pictures of the rain bouncing off its taut aluminum skin. I jump in, fire up the AMG-sourced twin-turbo V-8 engine—good for 503 hp and 505 ft lbs of torque—and give chase.

Like a rainstorm in the Algarve, the fiery new Vantage is a somewhat unexpected arrival. The name Aston Martin typically conjures up images of a stately and elegant GT, such as the new DB11. The Vantage is not that. Shorter even than a Porsche 911, it’s a throwback sports car with two seats, a muscular architecture, a potent power train, and an agile suspension—the Tasmanian devil of the back roads. It is a ground-up rethink of the previous Vantage, a model that was virtually unchanged for a dozen years and in desperate need of a new lease on life.

That the 2019 Vantage is a departure from more mannerly Astons is clear from the color choices alone: Options for the car, which has a starting price of $150,000 and will begin deliveries this summer, include a startling hue of fluo-rescent lime green. But whatever the color, the 2019 Vantage will never be mistaken for a DB11. “This is our hunter,” says Marek Reichman, vice president and creative head of the brand. “This is the predator in the pack.”

Reichman says that it was once possible to mistake one Aston Martin for another—but those days are gone. “Each new model will be visually distinctive,” he explains, citing one distinction on the new Vantage: Rather than the marque’s hallmark grille, the coupe features an open maw—which channels engine-cooling air—outlined by a fierce front diffuser. “Why would we put all that extra weight on the nose? Everything here is functional, and our goal was to take away mass. We stripped away all of the jewelry.”

To that point, it’s evident that the Vantage began with engineering goals, and the shape of the car came later. “Engineering solutions can be beautiful as well,” Reichman says. “We began with the lightweight bonded tub and then wrapped the beautiful body around it.”

Aston Martin’s aggressive aims for the Vantage show up in telling details. The car has no comfort or normal modes—it starts up in sport. From there, it can be dialed up to sport plus and track modes.

The suspension’s development was headed up by Matt Becker, the former chief dynamics engineer for Lotus Cars. Weight is less than 3,400 pounds without fluids, and the car has an ideal 50/50 distribution. For the first time in an Aston Martin, the Vantage comes standard with an electronic rear differential. It also gets a brake-based torque vectoring system that helps the car to turn.

Among marquee carmakers, Aston Martin has long stood out as a protector of sporting purity. But the technology has often been dreadful—transmissions that clunked through their gears, engines that seemed reluctant to turn over, and navigation systems that barely worked. But Aston Martin has now forged a technology partnership with Mercedes-AMG, gaining its bombproof 4-liter engine and infotainment system. The car also has an 8-speed torque-converter transmission, courtesy of ZF, which is mounted in the rear for weight balance. Shifts are Sunday-morning-easy at low speeds, and fast and sharp when pushing the car hard. Aston Martin will eventually offer the Vantage with a manual transmission, which, for true driving enthusiasts, is another reason to rejoice.

The interior is businesslike by Aston standards. The waterfall console, a long-standing feature, is gone. While that flowing surface was always a gorgeous place to showcase materials such as burled wood, it ate up space and outlived its usefulness. The Vantage’s squared-off steering wheel and no-nonsense layout are overtly assertive—in a good way. The buttons for engaging park, reverse, neutral, and drive are arranged in a triangular fashion around Mercedes’s Command controls. Aston, happily, is bucking the trend of replacing buttons with haptic touch screens, like the iPhone. There’s something reassuring about reaching over and turning off the automatic stop-start, for instance, without taking your eyes off the road. Materials throughout the interior are in line with the Aston Martin brand—carbon fiber, aluminum, and seats of grippy Alcantara or leather. (The optional red leather inserts look especially enticing in this interior.)

All of that is well and good, but for the new Vantage to be successful, it has to be fun. It is plenty quick—reaching 60 mph in 3.5 seconds and a top speed of 195 mph—but it is not for people in search of the ultimate track car. Rather, it is for those looking for an entirely engaging and entertaining driving experience.

To that, we find ourselves at a windy carnival ride of a racetrack—Portugal’s Algarve International Circuit. It is raining this day, too. A wet course can make for an uncomfortable situation, and with the electronic stability controls relaxed to track mode, the Vantage slides around the circuit. Even so, it feels pliant and mostly predictable—the kind of automotive toy that requires moderate skill and keen attention but is free of the leap-out-and-bite-you savagery of older 911s or the original Dodge Viper. The Vantage finds the sweet spot between engagement and confidence.

Back roads, however, are the Vantage’s happy place. And so we sluice our way around the Portuguese byways, taking advantage of moments when the sky stops dripping and the asphalt is dry enough to allow full-on rear acceleration from the Pirelli P-Zero tires (which were specifically developed for the model). The car seems to wrap us up in a joyous embrace as we spirit down the road in an envelope of sound and sensation. But the Vantage isn’t one of those sports cars that insulates passengers from the physicality of the road. You feel like you’re going fast. And trust us, you will be.

When our wet steeds are finally put away, we tell the Aston Martin folks that the Vantage more than lived up to their promises. “Just remember, this is only the base Vantage,” says one executive. “It will only get more exciting from here on out.”

By the  Numbers: Aston Martin Vantage

13 Years the previous-generation Vantage was on the market

170 Pounds of downforce from the passive, rear “ducktail” wing

150,000 Base price in dollars, putting the Vantage in contention with cars like the Porsche 911 Turbo and Mercedes GT C Coupe

Expect to see several more Aston Martin models in the next few years. Before the current management, led by former Nissan executive Andy Palmer, took over in 2014, the company’s release schedule was haphazard. Palmer, though, has not only wrestled the company’s finances under control, he has also implemented an ambitious rollout directive. Along with the all-new Vantage, the marque’s first-ever SUV—currently an all-electric concept dubbed the DBX (shown)—will appear in 2019. The most exciting news, however, may be the Ferrari fighter that the company is working on as a complement to its Valkyrie hypercar. According to Palmer, a production super-car could be seen as soon as 2020. “We’ve talked to our customers to see what they want,” he says, “and there’s a thirst for a mid-engine from Aston Martin.”