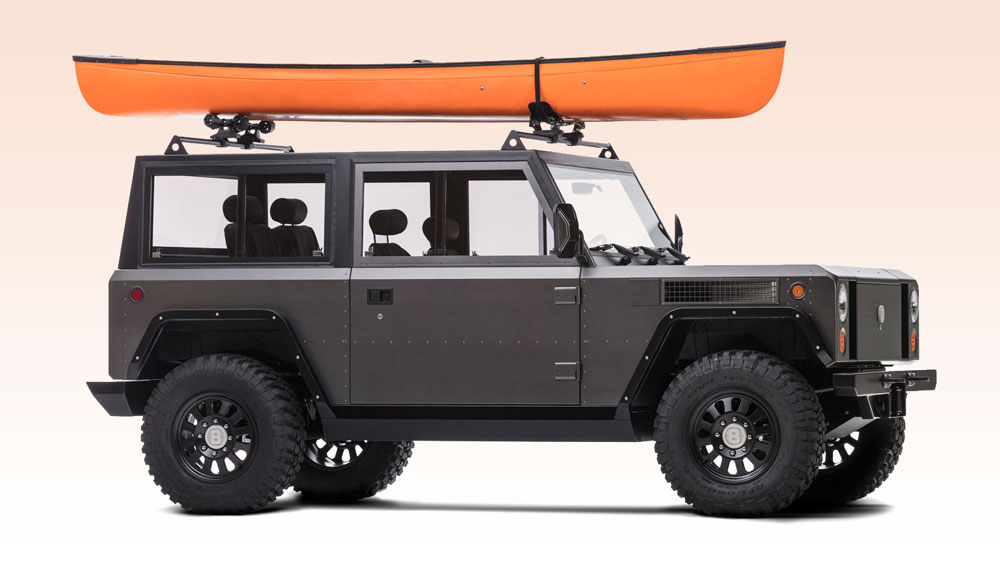 Not every child spends their downtime designing their future car company’s logo and potential product line, but Robert Bollinger was not your typical tyke. Life, however, can often steer a person away from their calling if they’re not careful. So as the years progressed, Bollinger—with a degree in industrial design—became sidetracked with a career in advertising and corporate management. But when the company he had partnered in eventually sold, it was time to return to the yearning of his youth.

In 2015, the entrepreneur began Bollinger Motors and work on the B1, an all-electric sport utility truck. This past July, a 360-hp prototype of the vehicle was revealed at the Classic Car Club of Manhattan. We recently spoke with Bollinger on the development of the B1 and why he is so driven to see it reach production.

What was your path to the formation of Bollinger Motors?

As a kid, I was just obsessed with cars and wanted my own car company. I was constantly drawing cars and logos—that kind of stuff. I went into industrial design school, which I loved because it focused on the reason behind design, not just pretty looks. I was going to go into automotive straight after that but, for a number of reasons, ended up in New York City working in graphic design and advertising as a creative director. And then my best friend needed a logo for his hair-care company—which I did in exchange for a haircut—and I eventually ran the whole business.

When we sold the company 8 years later, I had the wonderful opportunity of being able to decide what’s next. Automotive was still in the back of my head, so I bought a shop, fixed it up, and hired Karl Hacken, our chief engineer whom I got from LinkedIn. I basically advertised, “Hey, who wants to start an electrical vehicle company with me?” I got a lot of response, actually. So Hacken came on, and it was him and me from basically the summer of 2015.

What was your inspiration for the Bollinger B1?

Karl and I asked ourselves what we could do that hasn’t been done and that we were actually capable of doing. The inspiration basically came from my farm and the fact that my truck was always getting stuck in the snow. I wondered why nobody had built an all-wheel-drive truck with great weight distribution, and then realized that this is what we had to build. It came from actual need. That’s why the B1 offers the best of a pickup and the best in off-road capabilities put in one vehicle—an all-purpose tool.

The farm-inspired Bollinger B1 in its natural environment.  Photo: Courtesy Bollinger Motors.

How is your design philosophy presented in the Bollinger B1?

My personal style has always been Spartan, Shaker-esque. My aesthetic came through in the final truck. A lot of things we chose to do were chosen to make it simpler as well as easier to get it to market.

What has been the greatest challenge in the B1’s development?

The biggest challenge has been just getting over my own self-doubt. I thought the challenge was going to be acceptance and vendor response, but we got that early on. Because the electric vehicle market is so young, a lot of vendors are willing to listen and see where this is going.

Give us the basic nuts and bolts on the B1.

Very early on, we made the decision not to borrow anyone else’s truck to begin with. We didn’t want to buy a Jeep Wrangler, for example, and just electrify it. I had an epiphany on the farm regarding all the things that should come together on it [the truck]; it should have a big open front space and the ability to hold long pieces of lumber through the metal [body]. We couldn’t do that by borrowing someone else’s truck; we would be buying antiquated architecture. We needed to start from scratch—and we did.

Karl designed the chassis as a hashtag-shaped layout, where different sections can hold different components. We’ve tried to incorporate all of the underpinnings below where you sit in order to unleash space above. For the body, we didn’t want to have to buy forms—or have them made for us—in order to have curved body panels. One, they are not my style, but also by having them all laser cut, we shaved 18 months and $400,000 per panel off our budget. And then once you’re in that category of flat and you have that kind of wheelbase, you’re in the Land Rover and old Bronco arena of design. It was never the goal to purposely go down that path, but I’m happy when people say, “Oh, it reminds me of an old Defender!”

A true utilitarian vehicle, the B1 can carry long pieces of lumber lengthwise through its body.  Photo: Courtesy Bollinger Motors.

Is there an element to the B1 that makes you especially proud?

That it got done, that we actually had a reveal of a fully working prototype. We did all of the off-road and on-road testing with the vehicle, and it held up and is doing great. All of the data from everything has gone back into improvements, such as a couple of chassis changes to give more ground clearance. My reveal was very emotional because I realized, “Oh my God, we actually did this.” So, yeah, I’m just ecstatic.

What are your plans for production?

We are looking to start production in late 2019, while 2018 will be devoted to engineering it to that production level. We’re considering thousands per year eventually. They will be hand-built but on a small assembly line—it won’t be robots welding things.

The generous ground clearance and wheel travel make the B1 more than ready for off-road ramblings.  Photo: Courtesy Bollinger Motors.

Who do you see buying the B1?

The most vocal response we’ve had is from people who want to take it off road. It is street-legal but obviously has a lot of great off-road capabilities due to its ground clearance, wheel travel, locking differential, and everything. We’re winning over both the off-road and environmentally minded enthusiasts—they’ve usually been on the opposite side of the coin.

Can we expect more down the road from Bollinger Motors?

What’s next is another three vehicles based off of this one, but with substantial variations.

Editor’s note: Pricing on the B1 has yet to be determined.