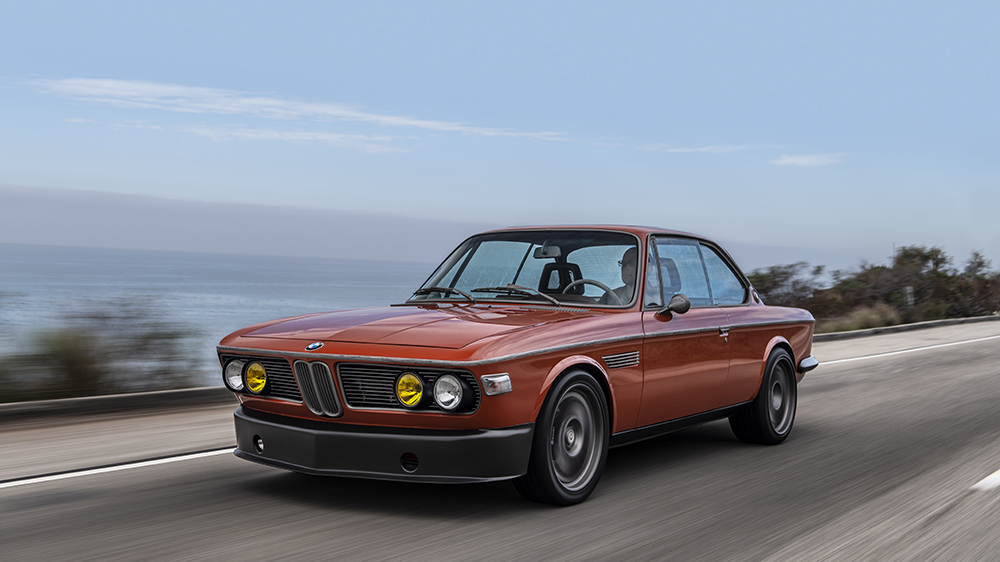 In the Marvel cinematic universe, Robert Downey Jr.’s Tony Stark uses his technological know-how to whip up everything from the Iron Man suit to the Arc Reactor that keeps his heart pumping. But in real life, the actor knows it’s best to trust the experts, which is why he asked to SpeedKore to turn his 1974 BMW 3.0 CS into the vintage ride of his dreams.

And based on images of the red E9 coupé, it looks like Downey’s trust was well placed. Although the Wisconsin-based custom shop is best known for its work on mammoth American-made muscle cars, it seems to have had little problem adapting its skills to a compact German speedster.

Iron Man’s brick red Beemer features a predominantly steel body, a rarity for a SpeedKore build. Despite this, it does sport a number of the shop’s signature carbon-fiber accents, including front air dam, rocker moldings and rear bumper. It rides on a set of custom HRE C109 forged three-piece wheels, according to a press release. One of the most notable exterior touches, though, is the beltline molding, which has been finished in grey woodgrain instead of chrome. The element is usually an afterthought, but here it helps create a sense of continuity between the car’s exterior and interior.

Inside the two-door, that same woodgrain pattern can be seen on the steering wheel, dashboard and door panels. The coffee-colored leather interior doesn’t look all that different from what it would have looked like new off the lot, but every piece of the dashboard has been remolded to make room for a Classic Instruments digital gauge cluster and hidden touchscreen, while the center console has been outfitted with a new, Lamborghini-inspired grab handle. Downey also asked that the rear seats be swapped out for a luggage rack, with matching luggage.

As much of a scene stealer as the car may be, its drive train is equally worthy of your attention. The vehicle’s original carbureted M30 3.0-liter inline-six has been swapped out for a naturally aspirated S38 inline-six like the one featured in the E34-generation M5. While some will complain that the engine is mated to a ZF4HP22 four-speed automatic transmission instead of a manual, it is still capable of producing a very robust 311 horses.

“When [Robert] came to us to restore the BMW, we instantly said yes and were excited by the opportunity to diversify our portfolio of vehicle builds with an iconic European vehicle. The great part about working with Downey is he actively participates in the styling of the vehicle and the final product reflects his unique style through and through.”

This is the third car that SpeedKore has built for Downey, and based on the results it’s easy to see why he keeps coming back. Previous collaborations between the actor and custom shop include his 1970 Mustang Boss 302 and 1967 Chevy Camaro that he gave to friend and castmate Chris Evans.