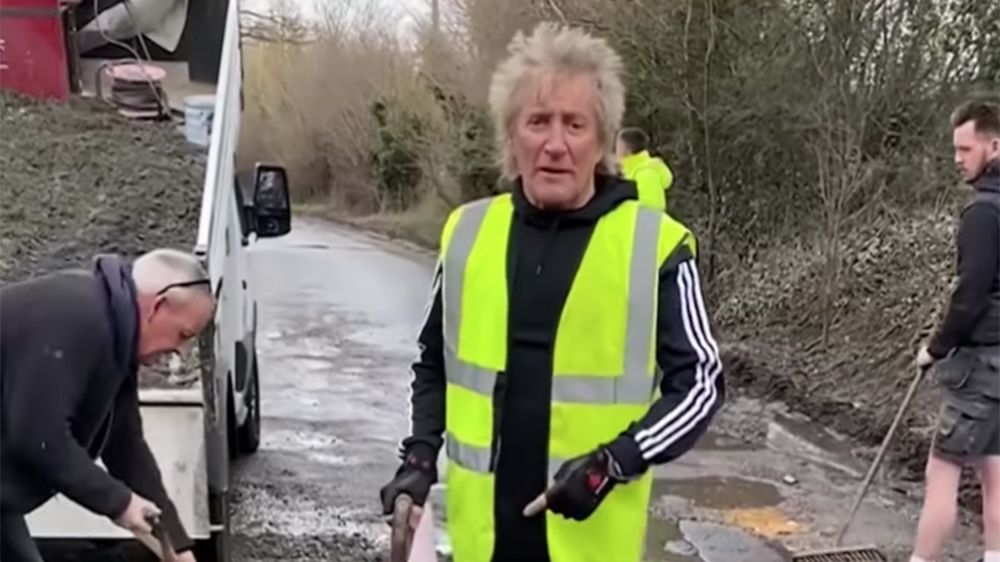 Sometimes you just have to take matters into your own hands.

Just ask Rod Stewart, who recently threw on a high-visibility safety vest and grabbed a shovel to help fill in some potholes near his country estate in Essex, England. The reason why? Poor roads in the area have been putting vehicles, like his Ferrari, at risk.

The “Maggie May” rocker posted a couple videos to Instagram over the weekend showing him and his “boys” pitching in and doing some local road work. The short clips, both of which features plenty of playful banter from the raspy voiced singer, show just how decrepit the bumpy and water-logged roads in the area actually are. It’s easy to see why someone would be worried about their car sustaining damage, especially if that vehicle happens to be a very expensive sports car. It’s unclear what kind of Ferrari Stewart drives, but he’s shown a pretty keen eye for automotive beauty in the past, like his old 1971 Lamborghini Miura.

“People are smashing their cars up,” the rockstar says in the second clip. “The other day, there was an ambulance with a burst tire. My Ferrari can’t go through here at all. So, me and the boys thought we’d come here and do it ourselves.”

The state of Stewart’s black tracksuit and green sneakers suggests he may not have pushed himself too hard while working. But we’re sure that the songs he sang and the little jig he busted out at one point helped boost morale for the rest of the crew. He also took the opportunity to get in a get in a little dig at the local government, pointing out that while he and his friends were forced to patch the road themselves, millions are being spent to fix the nearby M11 motorway.

Interestingly, Stewart isn’t the only member of his household who has gotten into public works over the last few weeks. His wife, Penny Lancaster, made her first arrest as a volunteer officer for the City of London Police.

It would seem that after a life of fame and fortune, both are ready to give back.