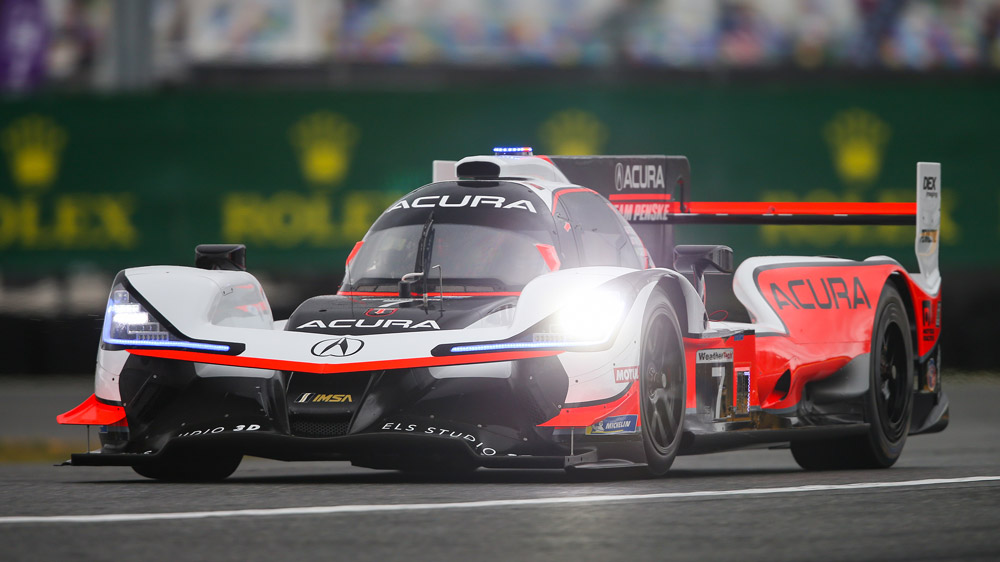 Daytona Beach, Fla., has been associated with high-speed driving for decades, but it all started on the sandy shores. Speed record attempts and stock car races literally happened on the beach, with some spectacular results, like in 1933 when a 2,300 hp Rolls-Royce V-12-powered land rocket dubbed Blue Bird set an eye-watering record of 272 mph. By the late 1950s, the motorsports spectacles were so popular, a proper track was called for and built. There, in 1966, the endurance race that lasts a day was born. This year, the 57th running of the Rolex 24 at Daytona, will see 47 cars—spanning three classes—piloted by world class drivers as they compete for the WeatherTech SportsCar Championship organized by the International Motor Sports Association (IMSA).

So what do you need to know before you watch? Keep an eye on the DPi prototype class. Last year’s overall race winner hails from that class, the Mustang Sampling Racing Cadillac, and it’s back this year to try for the winner’s circle yet again. Joao Barbosa, Filipe Albuquerque, Christian Fittipaldi, and Mike Conway will all rotate through the driver’s seat of the No. 5 as it defends its title. Cadillac has six DPi prototypes running this year, so odds are good that you’ll see at least one of them have a driver on the overall podium.

Retired F1 McLaren racer and Le Mans winner Fernando Alonso returns after his rookie run last year, sharing seat time of the Konica Minolta Cadillac DPi with Jordan Taylor, Renger Van Der Zande, and Kamui Kobayashi. Juan Pablo Montoya, another F1 alum and IndyCar driver, heads up Team Penske’s Acura DPi, along with Dane Cameron and IndyCar champion Simon Pagenaud. Amongst the DPi rides, a scant 0.8 seconds separated the top three finishers at the Roar Before the 24 shootout earlier this month, so when the green flag drops, expect to see fierce competition between the leaders of the pack.

In the GTLM class, Chip Ganassi’s Ford GT team will again be vying for another victory. Last year, the two Ford GTs finished first and second in their class, leading all but ten laps of the race. Reigning IndyCar champion Scott Dixon, Richard Westbrook, and Ryan Briscoe edged out teammates Joey Hand, Dirk Mueller, and Sebastian Bourdais by a mere 11.8 seconds.

A top adversary? Ferrari. The rivalry between the two marques is decades old, with Ford building the GTs back in the 60s as a response to being unable to buy Ferrari’s racing team, and Ferrari’s still on the war path. Davide Rigon placed the No. 62 Ferrari Competizione 488 GTE fourth during qualifying in the class, while Brazilian stock car champion Marcos Gomes pushed the No. 13 Via Italia Ferrari 488 GT3 to a track record, clinching the pole position for the GTD group during qualifying.

Other notable entries are Porsche and Corvette, with the No. 8 Chevrolet Corvette C7.R expected to bring some heat. BMW’s entry is a touching one, with Italian driver Alex Zanardi, who lost both his legs in a horrific crash in 2001, using a specially modified BMW Team RLL M8 GTE to compete.