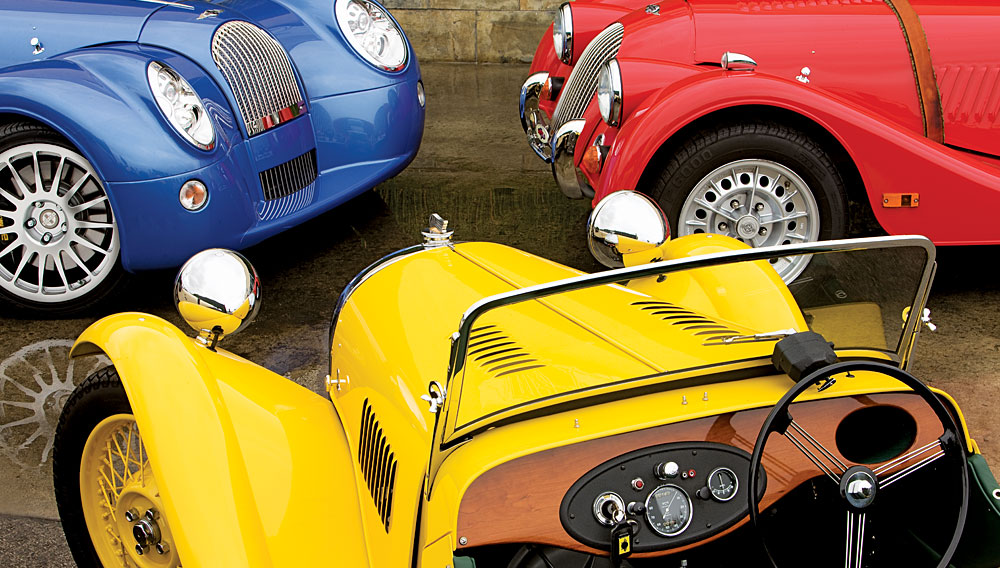 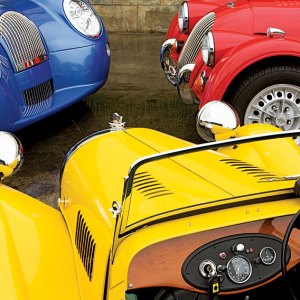 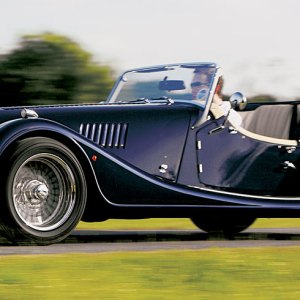 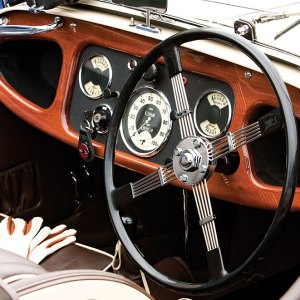 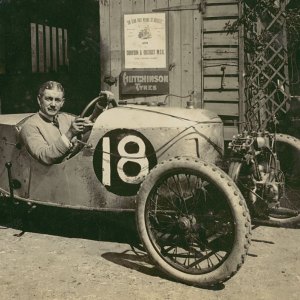 The Morgan Motor Company may be regarded by some as a quaint relic of Britain’s storied automotive past. Yet the last independent British carmaker celebrates its centenary not only with a nod to history, but with state-of-the-art technology that holds out the promise of a shining future.

When H.F.S. “Harry” Morgan built his first single-seat, three-wheeled automobile in 1909, he would not likely have bet that, one hundred years later, his would be the oldest privately owned motorcar company in the world. Even a few decades ago such a wager would have seemed foolhardy; however, shifting market dynamics and a spate of mergers and acquisitions have dramatically narrowed the field, particularly in Great Britain, where a quick inventory of major marques reveals a host of failures and only a handful of foreign-owned survivors—bastions of refinement like Rolls-Royce, Bentley, Aston Martin, Jaguar, Rover, and Mini that now exist as subsidiaries of German, Indian, and Middle Eastern firms. While today’s iterations of these familiar brands may be credible, their accents are anything but British.

That a three-generation family business with only four shareholders can succeed as a legitimate automobile manufacturer may seem preposterous, but it is precisely the simplicity of this formula—along with the company’s scrupulous avoidance of debt—that has enabled Morgan to thrive amid the tumult of bankruptcies, bailouts, and badge engineering that today beleaguers so many other automotive icons. But then Morgan has always gone against the grain in building cars—quite literally, as its automobiles are constructed with wood-framed bodies beneath their aluminum skins. What may seem archaic is actually a brilliant and up-to-the-minute engineering solution, given that wood, in conjunction with the bonded aluminum-composite chassis of the latest Aero models, provides exemplary crashworthiness. Wood also makes a Morgan far lighter than other cars and is a sustainable resource. This is just one way in which Morgan leads the automotive industry as an environmentally conscious manufacturer. “The fact is that we are the cheetah rather than the rhinoceros in the sports-car world,” says Charles. “The AMG Mercedes is very much the rhinoceros. It does have a more powerful engine than the Morgan, but it doesn’t accelerate any faster because it’s almost double the weight.”

From the introduction of its first car, Morgan has relied upon other firms’ engines to power its designs. Peter Morgan—Charles’ father and the man who, in collaboration with his own father, H.F.S., charted a new direction for the company with the successful debut of its four-wheeler in 1936—witnessed the demise of many British carmakers who incurred the substantial cost of developing, manufacturing, and updating proprietary powerplants. “Our belief is, you fit a good engine,” says Charles. “Ford and BMW make probably the best engines in the world. But make sure your chassis is ultralight, so that you get the best out of that engine.” The company accomplishes this goal with the light Aero series, which is fitted with a potent BMW V-8 engine, and the even lighter, traditional Roadster and Plus 4 models, which incorporate the Ford-Jaguar V-6 and inline-four Ford engines, respectively. (Unfortunately, the latter two cars are not available in the United States.)

Throughout the 20th century, Morgan made a name for itself as an innovator, turning out capable performers on road and track. In the early days, scrappy Morgan owners broke records in trials, and the company took a hard-earned first-in-class trophy at Le Mans in 1962 with the Plus 4 SuperSports. The factory continued the “big engine, light car” formula in 1968 when it introduced the Plus 8, which, according to Charles, “definitely put Morgan on the map as a celebrity car. Everybody bought one.” With its aluminum Rover V-8 engine, he says, “it was the fastest-accelerating car you could buy for the money.” But the imposition of ever-tightening crash and environmental standards in America and Europe brought an end to the model in April 2004, when the last Plus 8 rolled out of the factory.

The next generation of Morgan had its inception when Charles began working at the factory. “One of my goals was to develop a new car,” he recalls. (Because he was the owner’s son, he had to work twice as hard as others, and his ideas received great scrutiny.) “What better way of doing it than through motor racing?”

This new car evolved gradually on the track through competition, beginning in 1995 with the first prototypes. In March 2000 the concept became a full-fledged reality with the official launch of the Aero 8 at the Geneva Motor Show. This model was the first completely new Morgan in 64 years, and it remains one of the most advanced automobiles in the world even today. A decade before Bentley, Aston Martin, or Ferrari, Morgan was using aluminum, composites, and bonding technology to produce a chassis of unparalleled strength, safety, and lightness—with a wooden body tub, of course.

This strong, lightweight chassis proved its mettle once again this year with Morgan’s one-two victory at Silverstone in the hotly contested FIA GT3 championship, in which the marque competed against the likes of Ferrari, Porsche, Aston Martin, and Audi. Modestly, Charles Morgan says, “It’s a combination of having the right chassis and engine at the right time—and the right team of drivers.”

Asked how it feels to be the last man standing among independent British carmakers, Charles’ response is as understated as the facilities in which his motorcars are built. “One reason,” he says, “is that we haven’t overstretched ourselves.” (He is referring to other manufacturers’ boom-time expansions and subsequent cutbacks in production and workforce.) “You’ve got to be flexible. [It is] a proven fact [that the companies] that haven’t survived are the ones that haven’t been able to change fast enough to cope with the new landscape.”

Charles believes this landscape will continue to shift. “If you look before [World War II], you’ll see that Morgan three-wheelers have every single record. So you may ask, ‘Well, why the hell stop building them?’ It’s a bloody good question. But believe it or not—and I think this is true of anything, even the iPod—it will have a life cycle. If it’s really lucky, that will be about 30 years. Then it will be irrelevant. It was exactly that way with the three-wheeler. In 1935 or so, three-wheeler sales went off the edge of a cliff. They went from 3,000 a year down to the 200 or 300 mark. We had a lot of people. We had a big factory. We had to do something. We had to make four-wheeled cars.”

This ability to embrace change catapulted Morgan into the 21st century with the Aero 8, the wild AeroMax, the alternative-energy LIFECar prototype, and the brand-new Aero SuperSports. The limited-production SuperSports follows on the heels of the AeroMax (which was limited to 100 examples and has already sold out) at a time when most manufacturers of exotic sports and luxury automobiles are trying to figure out how to find enough buyers to keep their factories humming. Such concerns do not trouble Morgan Motor Company, whose 166 workers have plenty to do.

“It hasn’t done us harm, by the way, having 100 years of history behind us,” observes Charles, whose company is celebrating its centenary with festivities in the United Kingdom, Europe, and America through November of this year. “That’s always given us a lot of brand loyalty.”

Even after so many years, Morgan continues to make its vehicles by hand. “Yes, it’s still the best way to make a car,” Charles insists. “You know, robots can only do so much. Robots are the best at measuring a car. But if you’re actually going to put it together, then you need the flexibility of the human hand.” Morgan fenders produced using the state-of-the-art Superform aluminum process are carefully hung by hand on chassis built up by craftsmen, not machines, in a factory that has not changed significantly during its venerable lifetime.

All of which raises the question: Is a Morgan a luxury product? “Yes, of course. But not frivolous, because it does a job,” answers Charles. “I always make a distinction between so-called luxury products and authentic luxury products. An authentic luxury product probably takes longer to make. You certainly just can’t get it like that. So you have to wait for it. It has to be designed and made by skilled people, and slightly limited. It’s got to be made for you, or it loses its element of luxury, really.”

In August 2009, Morgan Motor Company’s centenary will be honored at California’s Pebble Beach Concours d’Elegance, where the factory will display its newest creation: the Aero SuperSports, slated to arrive in American showrooms next year. This latest exotic—limited to a worldwide production of 200 vehicles—promises to carry on the Morgan tradition, which the Pebble Beach gathering will showcase in full. “It will be an opportunity to see through different Morgans how the company and the car has developed,” says Charles. “We’ll be showing the LIFECar, the SuperSports, and where the company is going in the future. We’re trying to remain true to my grandfather’s philosophy of lightweight and simplistic. But we’re trying to do that now in a very modern way.”