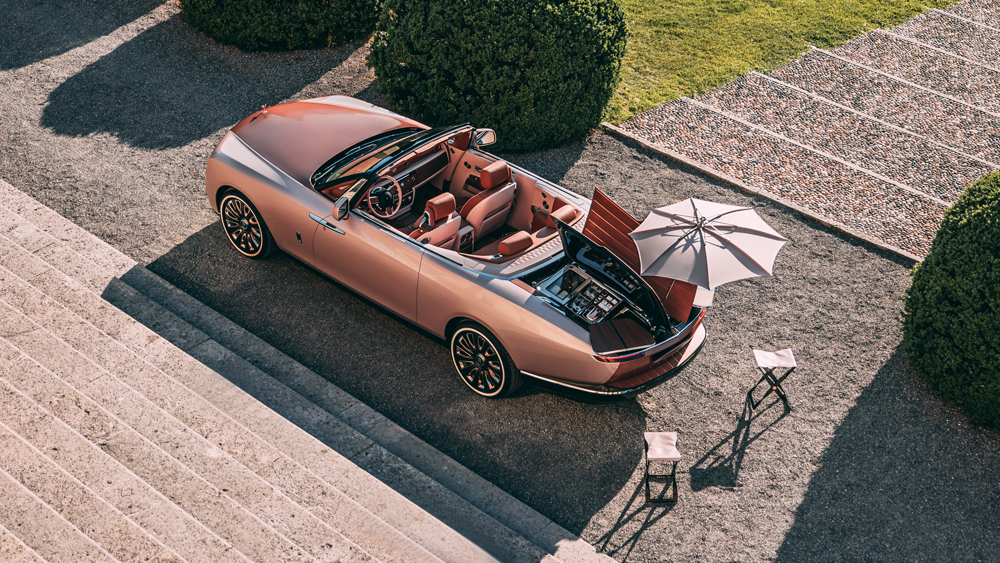 The light on Italy’s Lake Como seems to shift by the minute, altering in hue and intensity at will. Under the fickle spring sun here at the Concorso d’Eleganza Villa d’Este, the just-unveiled Rolls-Royce Boat Tail responds to the changing conditions like a chameleon, morphing from light sand to brilliant gold without warning. The commissioning of the second of three Rolls-Royce Boat Tail examples would never be mistaken for an act of humility, but it’s no accident that the 19-foot al fresco four-seater manages to reflect its surroundings rather than impose itself upon them.

“This particular client conveyed to us the desire to create a mirror to the differing environments in which the car would be used,” reveals Alex Innes, Rolls-Royce Coachbuild Design boss, “and I can say with some authenticity that only a few weeks ago we viewed the car with the client in the UK, and its tones were white and simplistic. Here, somehow it is transformed to reflect the terracotta of the scenery around it, transforming its personality.”

Glad we don’t need to get our eyes checked—and what a sight the Boat Tail is, even surrounded by the priceless automotive eye candy at one of the world’s most exclusive concourses. Inspired by early 20th century racing yachts, each Boat Tail is rumored to have cost the three clients in the neighborhood of $30 million. Commissioned by the scion of a pearl-industry magnate whom Rolls-Royce describes as “widely traveled, internationally educated and cosmopolitan in his tastes and influences,” this Boat Tail will become an addition to his “sizable collection of classic and modern cars housed in a dedicated private museum.”

The Boat Tail subverts the signature Pantheon grille with an unexpected twist on the imposing emblem. Starting with a solid block of billet aluminum, the metal is milled and the surrounds painted matte cognac, so only the polished vanes stand out. It’s the first time Rolls-Royce’s traditional grille hasn’t been topped with a peaked metallic structure, and the effect draws the eye past the rose-gold Spirit of Ecstasy hood ornament and thin headlamps, and across to the expansive length of the hood. The arc continues across the cabin before tapering at the tail, which is topped in Royal Walnut veneer, a nautically inspired bit which is inlaid with rose gold–plated pinstripes that are slightly muted with a satin-brushed finish.

For a new take on the signature Pantheon grille, the metal is milled and the surrounds are painted matte cognac so only the polished vanes stand out.  Rolls-Royce Motor Cars

The pièce de résistance lies beyond the butterfly panels, which bisect to reveal two jewelry case–like displays of beverage accoutrements on the left, and plate/silverware service on the right. The so-called Hosting Suite presents itself via a motorized action, with veneer-topped tables swiveling out to accommodate open-air picnics. Topping it off, literally, is a parasol that extends from between the two showcases. The parasol structure uses multiple computers and motors to operate, and when closed has been aerodynamically tested by Rolls-Royce at speeds up to 155 mph.

Though the Boat Tail’s massive scale includes hand-formed body panels, which constitute the largest ever produced by the Goodwood manufacturer, it’s the details that further separate these commissions from serially produced steeds. For instance, the wheels are first plated in rose gold, then painted and laser etched to reveal the tint below, a first-ever process for the brand. The crystal stemware by Christofle are finished in rose gold, and the flatware incorporates the same accents with subtle “BOAT TAIL” inscriptions along the handles. And in a genuinely unique act of customization, the instruments and the owner’s personal timepiece are ornamented with mother-of-pearl inserts from his own collection.

The freedom of unlimited choice can easily push a bespoke creation into the realm of absurdity, or worse, vulgarity. But the Boat Tail presented at Villa d’Este is finished in such subtle shades that it transforms to accommodate its environment, managing to make its most astonishing feature its understated elegance—a rare treat in a world where noise and brashness so often have the last word.