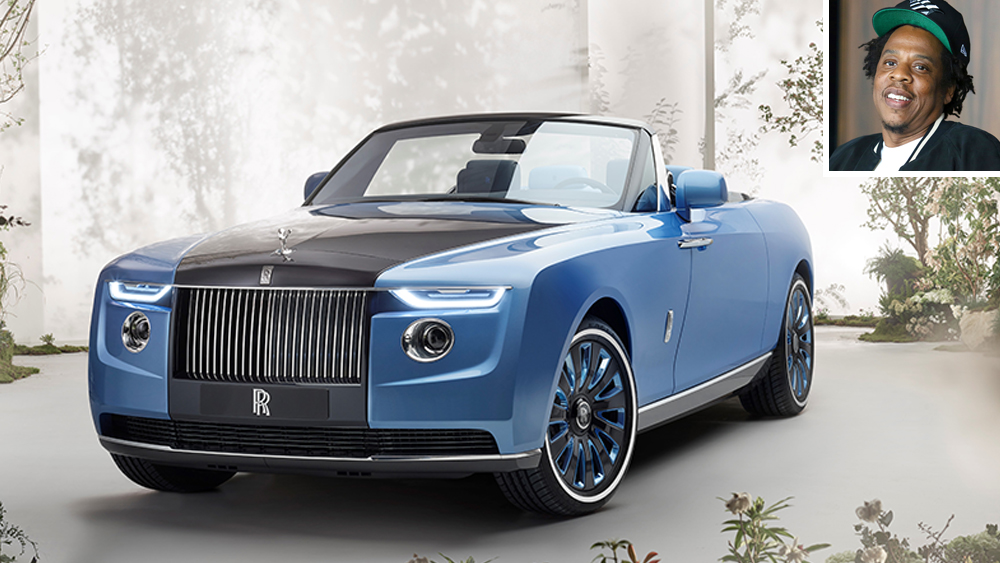 Jay-Z may be the ultimate New Yorker, but that hasn’t stopped him from embracing the California lifestyle. Just look at the latest (possible) addition to the car collection he and Beyoncé are building.

That vehicle, if a report from the UK’s Daily Telegraph is to be believed, is none other than the completely bespoke Rolls-Royce Boat Tail. This isn’t just any custom ride, either, as the picnic-friendly convertible is believed to be the most expensive new car of all time.

Inspired by the $13 million Rolls-Royce Sweptail, the dazzling blue Boat Tail may be the most decked-out Rolls you ever see.  Measuring 19 feet from bumper to bumper, the nautical-themed cabriolet is powered by a 6.75-liter V-12, seats four and comes with a detachable carbon-fiber roof that allows it to transform into a sleek coupé. Most impressive of all, though, are the twin side-opening compartments in the rear that house a champagne cooler, a Christofle picnic set, cocktail tables, matching chairs and a full-sized parasol.

There have been signs since last week’s reveal that the car may belong to Jay-Z. First, there were reports that the mystery owner hailed from America and that he and his wife were involved in the music business. Then there’s the Azure blue finish, which many view as a nod to the couple’s first child, 9-year-old Blue Ivy. And then there’s the champagne cooler: In the press images of the vehicle, it’s packed with bottles of Armand de Brignac, the same brand that Jay-Z partially owns.

For its part, Rolls-Royce won’t divulge who commissioned the car, but did say that the drop-top’s owner is a person of at least some renown.

“In broad terms, Rolls-Royce Coachbuild clients are significant individuals,” a spokesperson for the brand told Robb Report. “They are collectors, patrons of the arts and men and women who have commissioned some highly celebrated architecture. Their ambition is to create a permanent statement: something profound that moves beyond the normal constraints.”

If Jay-Z is in fact the owner of the Boat Tail, it shouldn’t come as that much of a surprise. He’s long shown an appreciation for the finer things in life. He’s also one of a select few who can afford to own the world’s most expensive car. After all, he did become rap’s first billionaire almost exactly two years ago.