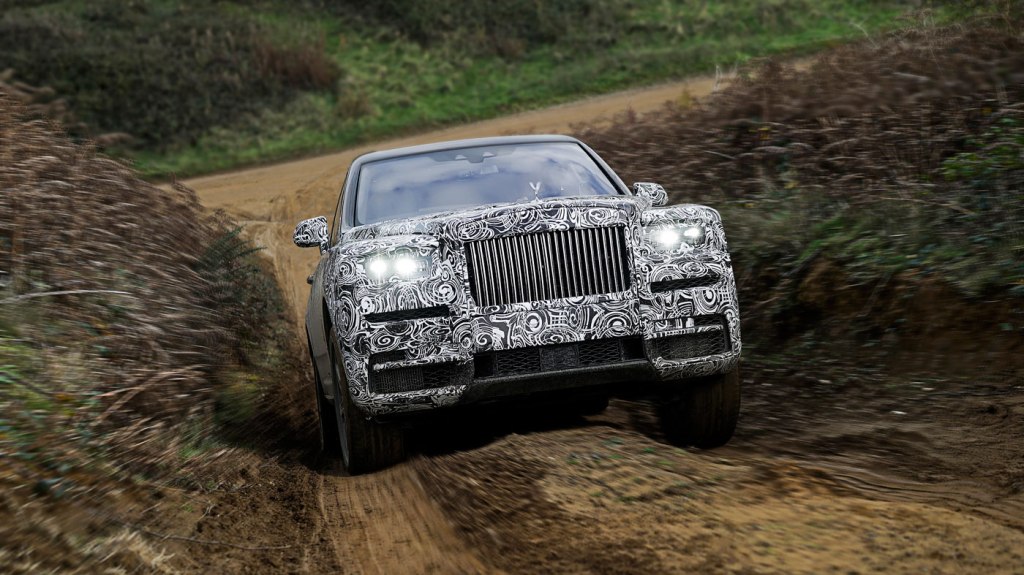 Like the inexorable meeting of the Titanic and its icy nemesis, the emergence of the much-anticipated SUV from Rolls-Royce has happened as if in slow motion, the first mention of its prototype—code-named Cullinan—occurring three years ago in the pages of The Financial Times. Of course, such a quotidian acronym as SUV does not exist in the Rolls-Royce lexicon, taxonomists at the company having chosen to class their newest creation a “high-sided vehicle,” height being only one of its outstanding attributes.

First encountering a brontosaur skeleton at a museum of natural history, one’s first thought is disbelief that such a giant creature might actually have existed. Similarly, a Rolls-Royce larger still than the substantive Phantom would make such a high-sided vehicle the largest modern Rolls-Royce ever, and in any other age, it would be like an answer to a question nobody asked. Except that in our age, it seems everybody is asking for a high-performance SUV—the bigger and more luxurious, the better—and the good folks at Goodwood were more than happy to oblige.

As with the aforementioned iceberg (or the tip at least), the name of Rolls-Royce’s “SUV” was in plain sight all along, since the code word used during project development is the official moniker, too. Cullinan refers to the largest gem-quality rough diamond ever discovered, a 3,106-carat monster dug out of a South African mine in 1905. Sir Thomas Cullinan was the owner of the mine, and his eponymous stone was so formidable—larger than two packs of cigarettes stacked atop one another—that it was eventually cut into nine flawless stones, the largest two of which are set into the British Imperial Crown and the Sovereign’s Scepter with Cross.

The Rolls-Royce Cullinan is based on the marque’s new—and proprietary—aluminum space-frame architecture that the company calls “Architecture of Luxury.” What that means in practical terms is a stronger, lighter chassis, the design and manufacturing of which can be efficiently adapted to the specific requirements of individual models. The new Phantom is the first Rolls-Royce built on this platform, and all future models will similarly benefit from this new technology.

Doubtless, most future buyers will not subject the high-sided Cullinan to low-brow escapades in the outback, but the manufacturer assures us that the high-sided roller will acquit itself admirably while traversing terrain more likely to encounter a wildebeest stampede. The most likely peril to be faced, however, will be from pedestrians crossing Rodeo Drive.