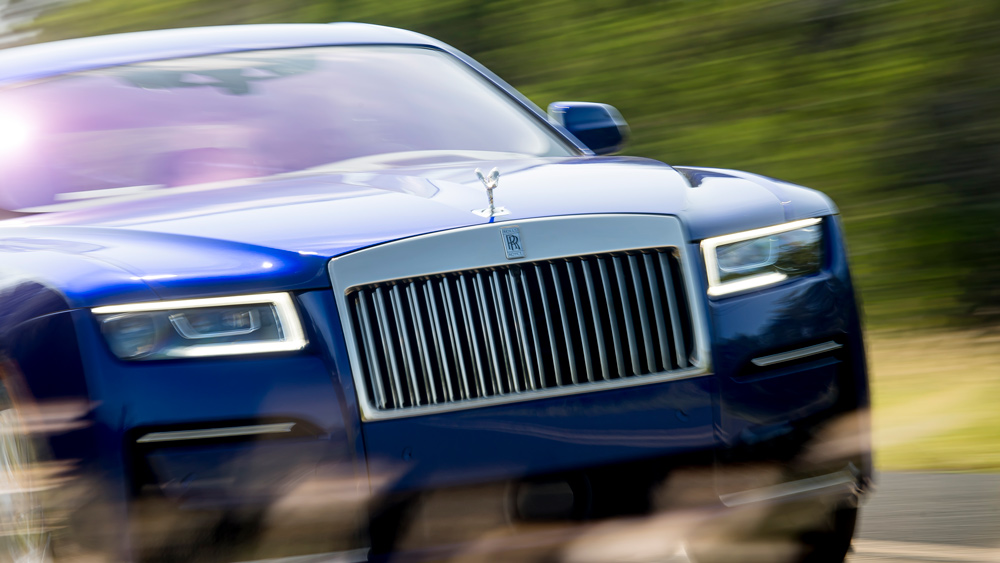 I drove my first Rolls-Royce, a Corniche, back when a powder blue disco suit was not a Halloween costume, and the sight of a Rolls-Royce on the street was an occasion. Even today, driving the car with the little lady on the hood is special, and more than ever before, it’s really, really fun.

Almost any conversation about Rolls-Royce might easily be derailed by philosophical ruminations, with arguments ranging from the most elitist to the most egalitarian. That’s because a Rolls-Royce unleashes emotions, attracts attention and, throughout its 115-year life, has had more than a smattering of real characters seasoning the owner gene pool.

The Flower Power era, for example, had John Lennon—with his psychedelic Phantom V—imagining himself to be ever so cool, a central digit extended to the establishment that he had become. Yet despite occasional hijinks by hippies or hedge funders, the marque has motored on with a grace and self-assurance that reflects its higher purpose from the very beginning: simply to build “the best car in the world.” In 1907, Autocar magazine named the Rolls-Royce 40/50 precisely that, and—true to its mission—the 2021 Rolls-Royce Ghost is certainly worthy to be the 2021 Robb Report Luxury Car of the Year—an elegant sedan with an unexpected twist.

Although the Ghost has been completely redesigned, its real surprise is not visually evident. Raise the hood, part the coach doors and poke around. At a glance, and certainly from a distance, casual observers would be forgiven for thinking the new Ghost—a smaller four-door than the Rolls-Royce Phantom—is essentially the same car as its predecessor, which had a solid 11-year run. After all, it shares similar proportions. But a closer look reveals everything new, from the squinty headlamps to the more raked backlight to the Spirit of Ecstasy that emerges from bodywork behind the Parthenon grille.

Crucial to the Ghost’s goodness is the actual structure of the car. “Architecture of Luxury” is what the Rolls-Royce marketers have coined the chassis, an all-aluminum structure shared with the Phantom VIII and the Cullinan “don’t-call-it-an-SUV.” This “architecture” allows optimum platforms to be configured for every model, and it’s only a matter of time until all cars in the lineup will be based on this new technology, which makes the new Ghost lighter, stronger and more refined than ever.

That the previous Ghost was tarred with the stigma of riding on BMW 7-Series underpinnings (a not entirely fair assessment, but perception is everything) chagrined many owners. Now, the Ghost is simply the most accomplished Roller to roll out of Goodwood.

That surprising twist to which we’ve alluded, however, is the sheer sporting performance of the Ghost, which, at 5,730 pounds, is not an unsubstantial vehicle. It was the only car at this year’s contest with a V-12 engine, a 6.75-liter, twin-turbo mill that makes oodles of power and torque that is smooth, effortless and visceral, allowing the Ghost to reach 60 mph in about 4.3 seconds. But it’s all accomplished without aural fanfare inside the cabin, due in part to an additional 200 pounds of sound-attenuating insulation that ensures the silence within its interior is only broken by the bespoke audio system developed expressly for the model.

Key to the Ghost’s sporting attributes is its full-time all-wheel drive—the first Rolls-Royce model with that configuration apart from the Cullinan—plus all-wheel steering at lower speeds that make the Ghost exceedingly nimble, despite the fact that it’s 3.5 inches longer than the car it replaces.

All the while, the Planar Suspension system delivers that famous magic carpet ride that is a Rolls-Royce tradition. Handling is further enhanced by the Flagbearer system that relies on GPS data and cameras to optimize the active suspension for road conditions, abetted by the satellite-informed eight-speed automatic transmission that utilizes GPS to anticipate powerband requirements. And amenities like Park Assist automatically slot the big Ghost into tight spaces without the need for driver input; handy when the chauffeur has the day off.

Rolls-Royce characterizes the new Ghost’s minimalist design treatment as “post-opulence,” though it would be disingenuous to ignore the unabashed luxury that accompanies a herd’s-worth of leather and fine details—from switchgear to the available star-spangled headliner. All that post opulence comes with a base price of $332,500, and more can be ladled on. Our car, at $428,250, was plenty opulent. And it was the first Rolls-Royce we’ve ever driven that had us—and our judges—discovering that ultra-luxury and exhilarating performance are no longer mutually exclusive.