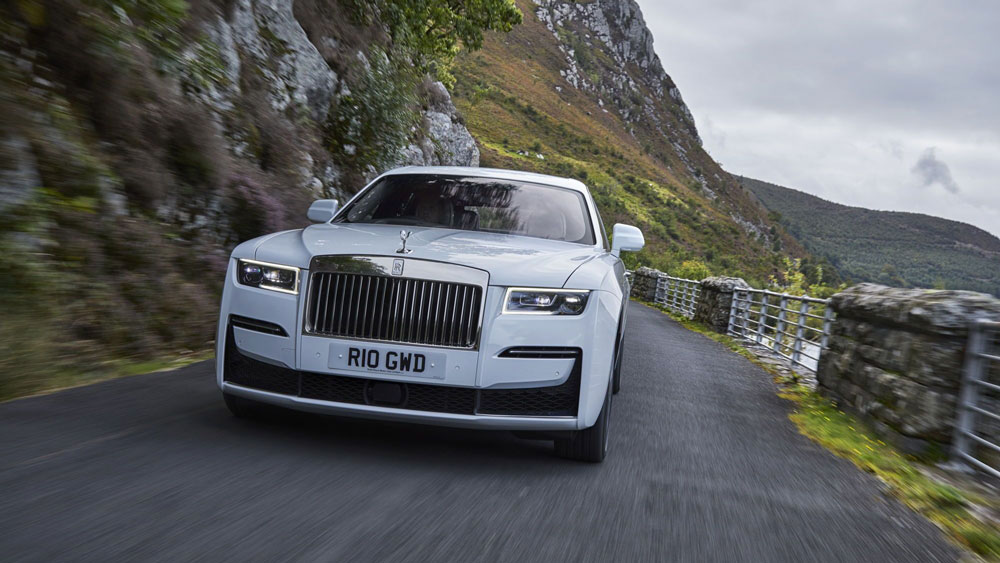 One wintry morning 17 years ago I arrived at Rolls-Royce’s new, modernist factory in England’s lush South Downs hills to collect the first Phantom VII to be released for a road test. It was an important moment: This was our first chance to see what BMW would do with the storied British brand it had acquired a few years earlier.

It didn’t disappoint. The Phantom’s design was imperious, and its interior quality redefined what we expect to find in an automobile. It immediately re-established Rolls-Royce as the world’s greatest luxury marque, and that DNA is clearly present in this new Ghost. I’ve just been among the first outsiders to drive one through the gates of the Goodwood factory, and the moment felt almost as significant.

Announced in 2009, the first-generation Ghost was slightly smaller than the flagship Phantom and more likely to be driven by its owners. It became the best-selling model in the marque’s 116-year history, and that long 11-year life cycle gave Goodwood plenty of time to plan this replacement. Clients asked for a little less ostentation and a little more traction, to misquote Elvis, and Rolls-Royce refers to this new philosophy as “post-opulence.” Don’t worry: Other drivers will have no doubts about what you’re driving. The new Ghost simply tries to express its status with material quality rather than ornamentation.

The writer going for a test-drive  Courtesy of Rolls-Royce

The car’s looks are an evolution of the original, with a more pronounced “eyebrow” over the headlamps and some clever surfacing to cut visual mass and avoid the appearance of arrogance. There are some subtle tricks that simplify the visuals: The Spirit of Ecstasy now appears through the hood rather than the grille, surrounded by paint, and the rear shell is simultaneously welded by two workers for a seamless finish. Inside, the cabin design has been simplified, and there’s the option of more honest, open-pore wood veneers. But while I’m impressed by the illuminated Ghost nameplate surrounded by 850 “stars” in the dashboard, I’m not sure how post-opulent it is.

Under the surface, there’s all-wheel drive to make the car more usable in the snow states, ski resorts and Russia; all-wheel steering to make it more nimble in cities; and a proudly unhybridized twin-turbo 6.75-liter V-12 engine, delivering 563 hp and driving through an 8-speed gearbox whose ratios you have no control over—because this is a Rolls-Royce.

A look at the Ghost’s interior  Courtesy of Rolls-Royce

All this is carried in a chassis based on Rolls’ proprietary “Architecture of Luxury” platform, shared with the new Phantom and Cullinan SUV. While other car-makers talk of cutting weight and piping engine sounds into the cabin, Rolls has stuffed the chassis with over 200 pounds of sound-deadening material, done its utmost to shut the engine out and analyzed every component for its aural performance. Its engineers even aimed for a near-silent cabin, before realizing that it would be weird, and settled for a single tuned “note” when in motion.

And as soon as you put it in motion, it’s clear that the brand’s efforts have paid off. This is another exceptional Rolls-Royce. Since that first BMW Phantom appeared, our notions of automotive refinement have been reset by near-silent EVs, but the new Ghost still feels serene. The engine is barely perceptible. Even with the throttle wide-open (unseemly, we know), it’s quietly authoritative rather than shouty—like the Prime Minister raising his voice in the House of Commons. It’s surprisingly, hilariously fast, too, for such a big car. The steering is a particular stand-out: Light but accurate and offering a gentle patter through the rim that tells you what’s happening below, it allows you to guide this 5.5-meter leviathan with confidence in both city traffic and when “pressing on.”

The Ghost has been lengthened by 3.5 inches and is an inch taller than before.  Photo: Courtesy of Rolls-Royce Motor Cars.

The ride is exceptional, aided by the Flagbearer system, which can spot bumps in the road ahead and prepare the suspension, and a simple but brilliant second damper on the front suspension. (It was invented in-house—the engineer Sir Henry Royce would be proud.) Of every car currently on sale, perhaps only a Phantom rides better. The bigger car is aimed squarely at the chauffeur-driven market, however. The Ghost must appeal to drivers, too, and the greater firmness required can result in a slightly busier reaction to poor surfaces.

But ignore me: I’ve been driving these things for a long time now, and I’m hyper-critical. The new Ghost is a triumph—another road-going Gulfstream from Rolls-Royce, but with nicer leather and carpets. Thankfully, post-opulent does not mean post-luxurious.