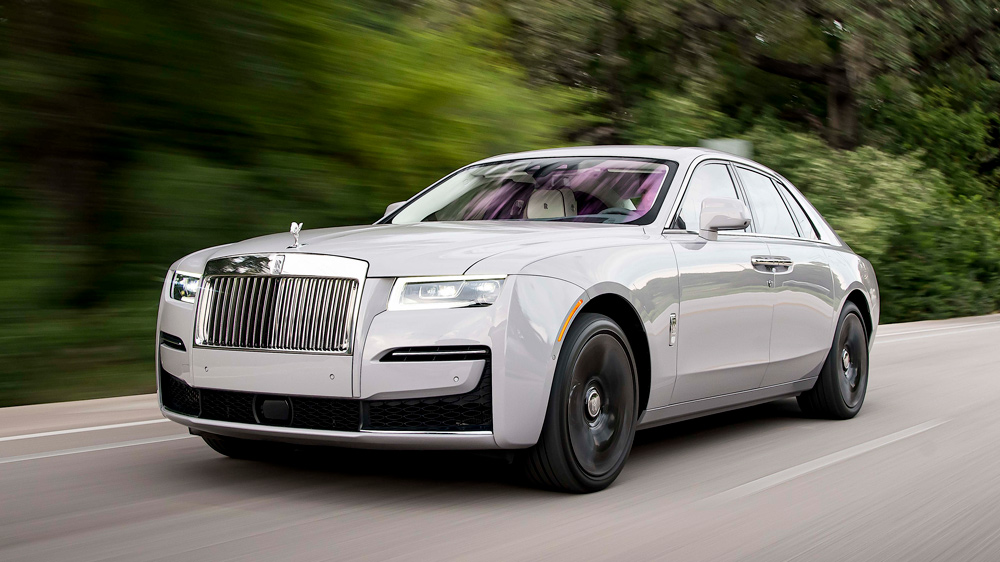 Looks can be deceiving. A quick glance at the new Rolls-Royce Ghost as it wafts oh-so-serenely by, and you might be hard-pressed to distinguish it from the outgoing model. Yet only two components have been carried over—an umbrella and that hood-mounted, gossamer-winged flying lady known as the Spirit of Ecstasy. In fact, the car has undergone such a transformation that it earned the title of Robb Report Luxury Car of the Year for 2021.

Beneath the relatively familiar exterior, however, lies a car enhanced by a multitude of landmark improvements. Everything from a new, lighter, all-aluminum spaceframe architecture to all-wheel drive and all-wheel steering to a redesigned suspension that enhances that “magic carpet” ride. Oh, and the new Ghost also reflects a single-minded focus on delivering almost-mystical levels of silence.

Talking of architecture, the 2021 model year Ghost is now built on the same aluminum spaceframe “Architecture of Luxury” platform first used on the eighth-generation Phantom and passed on to the Cullinan SUV. It allows the Ghost’s suspension assemblies to be pushed to the very front of the car so that the vehicle’s still-potent 6.75-liter V-12 can sit behind the front axle, achieving an optimum 50/50 weight balance for athletic handling.

The importance of the new Ghost to Rolls can’t be overstated. Since the arrival of the original version in 2009, it has become the most successful model in the marque’s 116-year history, attracting younger buyers looking for a slightly smaller, more driver-focused, yet still exquisitely built and luxuriously equipped car. With its new emphasis on more substance and less “bling”—Rolls-Royce calls the trend “post opulence”—the Ghost’s continued appeal and sales success are guaranteed.

Look no further than that stately, instantly recognizable Pantheon grille to see the subtlety of the Ghost’s visual evolution—and the insane attention to detail that has gone into this new offering. To showcase the grille, 20 LED lights are set beneath the top to shine down on the stainless-steel vanes. But illuminating polished stainless created rather too showy a display, so the backs of the metal blades were sandblasted to give a softer, ethereal glow.

More impressive still is the construction of that all-new aluminum body to reduce shut lines, the unsightly gaps where body panels butt-up to one another, like around the doors, between the hood and grille and around the trunk. With this iteration of Ghost, Rolls-Royce went on a mission to eradicate as many shut lines as possible and reduce panel gaps to a hair’s width. To create the larger panels, a quartet of artisanal welders work in symphony to deliver one continuous seam.

To showcase the new grille, 20 LED lights are set beneath the top to illuminate the stainless-steel vanes.  Photo by James Lipman, courtesy of Rolls-Royce Motor Cars Limited.

More impressive still is the construction of that all-new aluminum body to reduce shut lines, the unsightly gaps where body panels butt-up to one another, like around the doors, between the hood and grille and around the trunk. With this iteration of Ghost, Rolls-Royce went on a mission to eradicate as many shut lines as possible and reduce panel gaps to a hair’s width. To create the larger panels, a quartet of artisanal welders work in symphony to deliver one continuous seam.

Another example of obsessive attention to detail is found in that fabled Sprit of Ecstasy hood ornament. Previously, she rose out of a separate frame around the grille. Now she levitates out of the hood itself for a cleaner, more elegant look.

The Sprit of Ecstasy hood ornament now levitates out of the hood itself for a cleaner, more elegant look.  Photo by James Lipman, courtesy of Rolls-Royce Motor Cars Limited.

Dimensionally, this Ghost expands on the past. Overall length is stretched by 3.5 inches and width by 1.1 inches, while an extra inch has been added to the height. The increased measurements give the car greater visual gravitas and further bolster its planted stance.

As you would imagine, the cabin of this new Ghost is a remarkable place to be, and an overpowering part of the car’s enduring appeal. The fit, finish and artisanship are unparalleled.

Take the section of fascia in front of the passenger. It comes with 152 LED lights connected to 90,000 laser-etched dots to create a galaxy of stars around the Ghost logo, complementing the automobile’s twinkling Starlight Headliner.

And in keeping with the post-opulence ethos, the car’s leatherwork on the seats and doors is refreshingly devoid of busy detailing and superficial embellishment. That means no diamond-quilting or fussy contrast-color stitching. Even the woodwork is more understated, with a move to softer, open-pore veneers. That said, the marque’s Bespoke department will happily add as much customization as a buyer desires.

The Ghost’s audio system also reveals the exacting standard of refinement that has gone into the overall redesign. The 18-speaker, 1,300-watt configuration incorporates a resonance chamber in the sill sections of the body to act like huge subwoofers. In addition, high-precision magnesium-ceramic speakers, along with “exciter” speakers, allow infinitesimal changes in sound. The acoustic quality is surreal.

Feeling a little germophobic in these days of Covid-19? There is a Micro-Environment Purification System that channels all cabin air through a nanofleece filter, which is capable of removing pretty much all ultra-fine particles from the interior in less than two minutes. And if it senses a drop in exterior air quality—perhaps an odorous 18-wheeler alongside—it automatically switches to recirculation mode.

And when it’s time to exit this rolling temple of tranquility, there’s no need to push open those bank vault–like doors. A couple of gentle tugs on a chrome-plated handle will gently power the doors outwards. Press a button, and they automatically close as well.

Seems that during the six-year development of the car, engineers managed to achieve close to the impossible—a cabin that was almost completely silent. No engine noise. No wind noise. No tire roar.

Yet when a group of owners was asked to experience the quiet interior, they were less than enthusiastic. It seems they found it too disorientating, too, well, ghostly, almost like wearing noise-cancelling headphones while driving. The solution? To give the cabin the slightest sonic accent.

Achieving this whisper required pretty much every component to be acoustically tuned, from seat frames to the trunk space to the inside of air-conditioning ducts. That, and adding over 200 pounds of sound-deadening materials in the doors, roof and even inside the tires. Double-skin bulkhead and floor sections were also created, along with double-glazed windows. While Rolls-Royce would never admit that this new Ghost is actually quieter than the flagship Phantom, we reckon it is.

The Engine: Power, and Plenty of It

Why change a good thing? That was Rolls’ thinking in regards to its 6.75-liter twin-turbo V-12. As before, the engine delivers 563 hp and 627 ft lbs of torque. Subtle changes to the engine mapping means that max torque is now available from just 1,600 rpm, which is only 600 rpm above tickover. But now, the eight-speed automatic transmission delivers that mechanical muscle to all four wheels, instead of just the rear ones. If there’s need to escape the prying lenses of the paparazzi, a firm squeeze of the throttle will thrust you from standstill to 60 mph in just 4.6 seconds.

If about to confront a Detroit-style pothole looming fast, don’t expect a ker-thump as a wheel drops into it, or feel any thudder-judder in the steering. Spookily, there will most likely be nothing. When sitting behind the wheel, you will not be bothered by, or even aware of, minor irritations like blacktop lumps and bumps.

To achieve this astonishingly smooth ride, the Ghost features a new suspension design that Rolls calls its Planar Suspension System. What those engineers at Goodwood have created is being touted as the world’s first double-damper suspension. It works on the premise that if the main damper doesn’t totally absorb the shock, there’s a second one to sweep up.

The 5,730-pound car accelerates from zero to 60 mph in 4.6 seconds.  Photo by James Lipman, courtesy of Rolls-Royce Motor Cars Limited.

But that’s only part of the magic. Combined with the automaker’s existing Flagbearer system, the result is otherworldly. Flagbearer involves cameras that scan every inch of the road ahead. When they detect an upcoming surface irregularity, quick notification is sent to the Planer suspension, preparing it for the upcoming impediment. The system works seamlessly with the car’s double wishbone suspension at the front, multi-link set-up at the rear, air springs all round and adaptive dampers, delivering a sensation akin to floating.

In addition, GPS data is used to pre-select the optimum gear for every upcoming twist, turn and incline, to enhance the smoothness of the power delivery. Yet despite this emphasis on gentility, the all-wheel drive and precise, nicely weighted steering help give the Ghost a feeling of real agility, while the addition of rear-wheel-steering adds nimbleness at speed and tighter turning in town.

Talking of speed, with all of that torque on tap, the 5,730-pound Rolls will surge off the line with biz-jet-like thrust and cruise up to a limited top speed of 155 mph with uncanny ease.

The Price of Perfection

Trust us, no one sticks with the base price when buying a Ghost. The MSRP of $332,500 is the starting point before most buyers tailor to taste. Colors, trim, wheels, monograms, pin-stripes, tread-plates; you name it. Our test car came in at $428,250.

And now there’s the option of the Ghost Extended, starting at $380,000, with 6.7 inches added to the wheelbase for even greater stretch-out space in the back. Options also include a reclining, aircraft-style Serenity Seat and rear-seat Champagne chiller, of course. We’re sure that soon to follow will be the inevitable Black Badge Ghost. After all, it’s the next logical step in luxury for what’s arguably the best Rolls-Royce ever built.

More stories about the new Rolls-Royce Ghost from Robb Report: