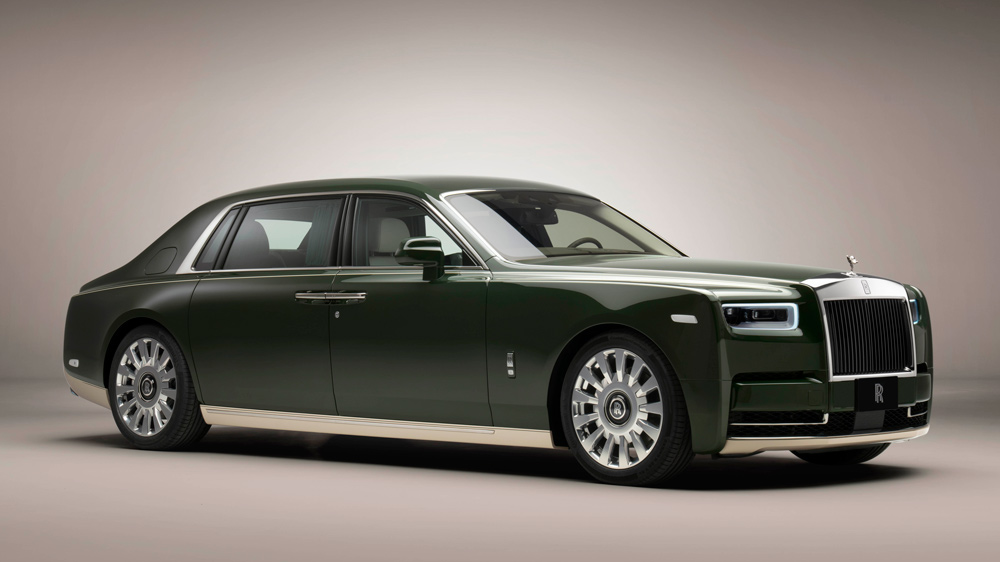 When it comes to Yusaku Maezawa’s automobiles of choice, the founder of online fashion retailer Zozotown has a passion for flashy, seven-figure supercars. The 45-year-old entrepreneur’s current stable is said to include a $2.9 million Bugatti Chiron, an ultra-rare $1.8 million Mercedes-Maybach G 650 Landaulet, and an Aston Martin One-77. He’s reportedly awaiting delivery of his $3 million, 1,000 hp Aston Martin Valkyrie hypercar, and he might, or might not, still own the famous, purple-painted Pagani Zonda he called the Zonda Zozo—a vehicle heavily damaged in an accident with a Maybach 62S in Tokyo back in 2016.

So it’s somewhat refreshing that, for his newest ride, Maezawa initiated a unique collaboration between Rolls-Royce Motor Cars and Parisian fashion house Hermès to build what is, arguably, one of the most elegant and understated bespoke Phantoms ever.

The exquisite Phantom Oribe features a stunning combination of dark green and cream paintwork, said to have been inspired by the glazes of ancient Japanese Oribe ceramics that Maezawa also collects. Maezawa—worth an estimated $3.6 billion, according to the Bloomberg Billionaire Index—reportedly loved the shade of green so much that he persuaded Rolls-Royce to let him use the bespoke color for his newest jet.

For the plush, surprisingly low-key interior, bespoke specialists at Rolls-Royce worked with Hermès designers, using the French company’s glove-soft Enea Green leather to swathe everything from the seats to the steering wheel to the Champagne cooler.

For the Phantom‘s trademark Gallery, that glass-covered panel that runs the length of the passenger-side dash, Maezawa again decided it should be uncharacteristically subtle. It features a piece of hand-painted, open-pore Royal Walnut wood with a somewhat confusing design by the late, celebrated French illustrator Pierre Péron, responsible for the work on many of the iconic silk scarves from Hermès.

Other standout details include “Toile H” canvas from Hermès—the cloth combines two different color threads to form an “H-for-Hermès.” The latter is featured on the lower door armrests, center console and, impressively, for the headliner. Interestingly, Maezawa skipped the twinkling Starlight Headliner feature, normally de rigueur with any Phantom.

As for the completed Phantom Oribe, Rolls-Royce CEO Torsten Müller-Ötvös says the car represented a “landmark” in having brought together two famous companies with more than three centuries of combined experience and heritage, stating in the car’s official announcement: “It has been an extraordinary privilege to unite on such a creatively challenging, technically demanding commission, and bring our client’s remarkable vision so beautifully to life.”

The Phantom Oribe actually represents the second collaboration between Rolls-Royce and Hermès. Back in 2008, the two houses created a one-off, steely-gray Phantom for the Four Seasons George V hotel in Paris. And while that one is available for airport pick-ups and city tours, it’s safe to say that Maezawa’s custom Rolls won’t be.