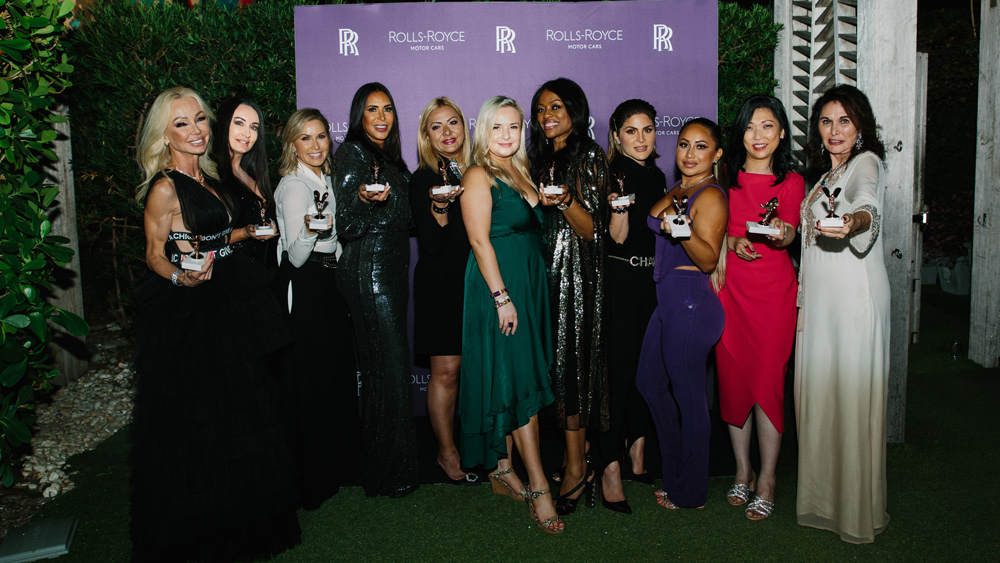 A stone’s throw from the powdery sand of Miami Beach, Rolls-Royce turned the music up as the sun went down to celebrate the long-awaited launch of its Phantom Phenom program. A small group of women from across the US, many accompanied by their significant others and friends, gathered for a dinner in their honor at the W South Beach in the midst of Art Basel.

ro“As a company, we spend a lot of time with our customers,” said Martin Fritsches, president and CEO of Rolls-Royce Motor Cars Americas. According to Fritsches, the marque realized “that we had these extremely interesting couples, very often male customers, but the women had incredible stories to tell.”

Waylaid because of the pandemic, the program has been launched exclusively (for now) in North America, and currently features 15 women owners, selected for their accomplishments while “bringing life to the new feminine face of Rolls-Royce,” Fritsches added.

Those in the collective range from designers and jewelry magnates to real estate titans and entrepreneurs, all part of a program that “recognizes the power of women,” said Lee Bailey, a Houston-based businesswoman. “Our purchasing power, our discernment—we understand the differences between dedication to craftsmanship versus mass production.”

Each Phenom owns at least one, if not multiple, vehicles from the automaker. They also engage in sizable charitable efforts. For example, Miami-based Sandra Fiorenza works in real estate, but her true love is Arabian horses and equine therapy. “When you are around a horse, you are focused and calm, it’s my favorite feeling in the world and something I want to share with others.” As a Phenom, Fiorenza noted that she’ll be able to share her passion with “a whole new, very engaged, audience.”

Other members include Shanti Hoffman, founder of trucking company Hoffman Transportation and supporter of charity Shepard’s Door, which is committed to providing women and children safe haven from domestic violence; Melissa Muller, medical spa owner and advocate for New Friends New Life, a charity that provides education and employment assistance to rescued victims of sex trafficking; and Ella Peters, founder of Parisian jewelry brand Jovadi and supporter of Children’s National Hospital and its penchant for pro bono care.

Attendees were treated to a three-course meal under the stars with a live performance by Spinphony, a female electric string quartet that reimagined AC/DC’s “Back in Black” as well as songs from Vivaldi and Bruno Mars. The evening concluded with an awards ceremony, where each Phenom was presented a Spirit of Ecstasy trophy as tribute to their continued influence and commitment to paying it forward.