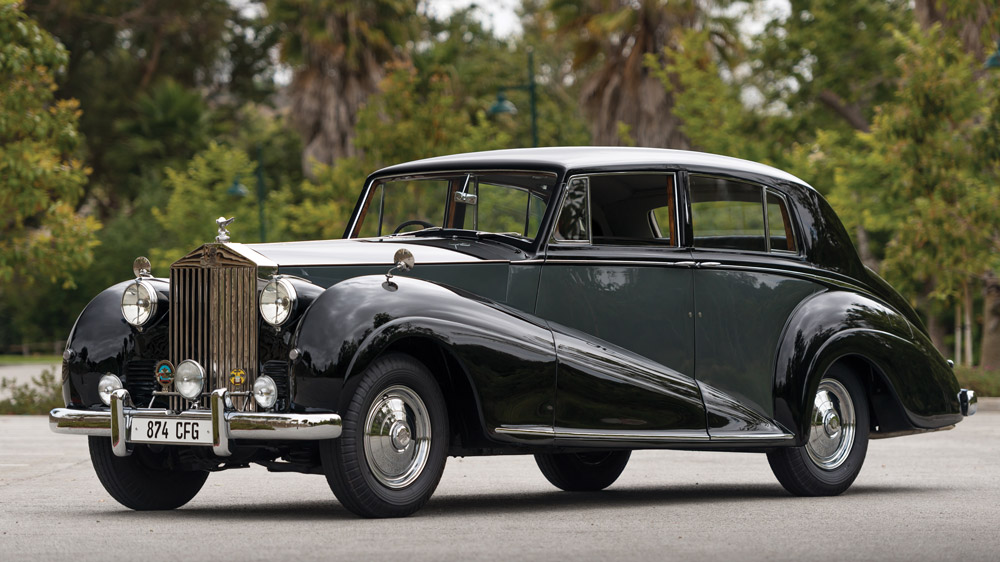 No longstanding automaker has undergone as stark a shift in identity as Rolls-Royce. In the beginning, with its Silver Ghost, the esteemed British motorcar company broke world records for nonstop drives—it traversed more than 14,000 miles driving back and forth from London to Glasgow 27 times. By the middle of the 20th century, however, Rolls-Royce’s grand tourers—through a long-standing relationship with Great Britain’s royal family—had a well-earned reputation for being stately automobiles where the chauffeured passenger was the primary focus.

Today, Rolls-Royce has transitioned back to also emphasizing the driver (and luxurious, high-performance motoring experiences), but the marque’s dominance throughout much of the 20th century as the world’s leading producer of custom-built town cars and limousines will never be forgotten.

During the RM Sotheby’s Arizona sale on January 17 and 18, the auction house will sell almost 20 collector cars from the Calumet Collection, a Southern California auto museum, including a handful of noteworthy Rolls-Royce models that stand out as some of the marque’s best from the previous century.

Appropriately, the Roaring Twenties in the United States was accented by opulent and eye-catching Rolls-Royce motorcars, including this 1923 Rolls-Royce Silver Ghost Salamanca, which was commissioned by gangster Enoch “Nucky” Johnson, who effectively ruled Atlantic City for almost three decades.

According to Matt Malamut, a car specialist at RM Sotheby’s, this particular example features a rare Salamanca body style, which allows the car to be configured as a full town car with a sliding front roof for the driver and also a complete convertible with a fold-down rear top. “This was a costly option back in the day,” Malamut says, “and few are often seen or preserved.”

Following Johnson’s ownership, the car—which could sell for as much as $250,000—garnered the nickname “The Bullet Hole” for a visible and well-preserved hole in its front passenger side that immortalizes one of the gangster’s fortuitous escapes. As Malamut acknowledges, “both the colorful history of this car and the quality of the restoration put it in a class of its own.”

Coachbuilder James Young only built 27 Rolls-Royce Silver Wraiths, and less than half of them featured a division window that effectively separated the driver’s cockpit from the rear passenger section. This 1952 Rolls-Royce Silver Wraith is one of those scarce examples, but it’s even rarer because it was built as a showpiece to demonstrate James Young’s capabilities at the 1951 Earls Court Motor Show.

“Everything is in the details with this car,” says Malamut. “Its sweeping beltline and sleek curvature, ornate door handles, louvered horn grilles, and ultra-lush interior with fine woodwork and cabinetry treatments were done to the highest degree that only a show car could possess.” Estimated to sell for $150,000 to $200,000, the vehicle is ideally suited for concours events and also long-distance drives. According to Malamut, it is “a very smart buy for any discerning Rolls-Royce collector who enjoys the duality of both showing and touring.”

RM Sotheby’s declares this 1967 Rolls-Royce Phantom V State Landaulet to be “the ultimate Phantom V in every regard,” and the statement is not one of hyperbole. Originally commissioned by Nicolae Ceauşescu, the Communist dictator of Romania, in 1966, the car was outfitted with every conceivable option—from a combination cocktail bar and entertainment cabinet—with a television—to a refrigerated wine cooler, dual air conditioners, and fluorescent overhead lighting for nighttime parades.

This vehicle has twice chauffeured the Queen of England.  Photo by Robin Adams, courtesy of RM Sotheby's.

After a year of non-use, the car was shipped back to England and eventually sold to an American couple, making it the only Phantom V State Landaulet to be delivered to a private owner. Since then, the car has twice chauffeured the Queen of England (once in Bermuda and once in the Cayman Islands), as well as Princess Grace of Monaco. “This car is meant for celebrating life in the most sophisticated sense,” Malamut says, “not to mention being the most expensive car of its kind one could buy. Being equipped with so many features, it has everything one would want to entertain friends and family, and be seen in.” According to RM Sotheby’s, it could sell for as much as $1.5 million.

As a company demonstrator commissioned by a well-known Rolls-Royce dealer located just west of London, this 1972 Rolls-Royce Phantom VI limousine was built specifically to showcase every conceivable luxury accoutrement that could be ordered, from velvet interiors with sheepskin carpets to crystal decanters and matching sherry glasses stored in a wooden cabinet made of burled walnut.

A showroom car commissioned with all the tony touches of the day.  Photo by Robin Adams, courtesy of RM Sotheby's.

Originally delivered to the British entertainment magnate Lew Grade (an early investor in Jim Henson’s Muppets), the car is still equipped with (and will be sold with) a set of china and flatware that was stored in a wicker hamper and available for luxurious roadside picnics. “This Phantom VI is the ultimate combination of comfort and luxury,” says Malamut, “and it was truly built for nothing other than to be chauffer driven.” The car is expected to sell for $375,000 to $475,000.

During the 1980s, a Canadian businessman revived Hooper & Co., the British coachbuilding firm that built specialty vehicles for Great Britain’s royal family, and set out to create bespoke, stately chariots using contemporary Bentleys and Rolls-Royce motorcars as their foundation. This 1989 Rolls-Royce Silver Spirit I Emperor State Landaulet is the most lavish and impressive vehicle born from those efforts.

A personal computer, fax machine, and printer are part of the interior’s ensemble.  Photo by Robin Adams, courtesy of RM Sotheby's.

As a rolling homage to a decade defined by cutting-edge personal electronics, the passenger compartment—adorned in custom velour—features a personal computer, fax machine and printer, CD player, telephone, and television. “The ’80s and ’90s have been really in vogue in the collector car market,” Malamut explains. “This car perfectly represents an era of both excess and innovation, but is amazingly usable and enjoyable at the same time.”