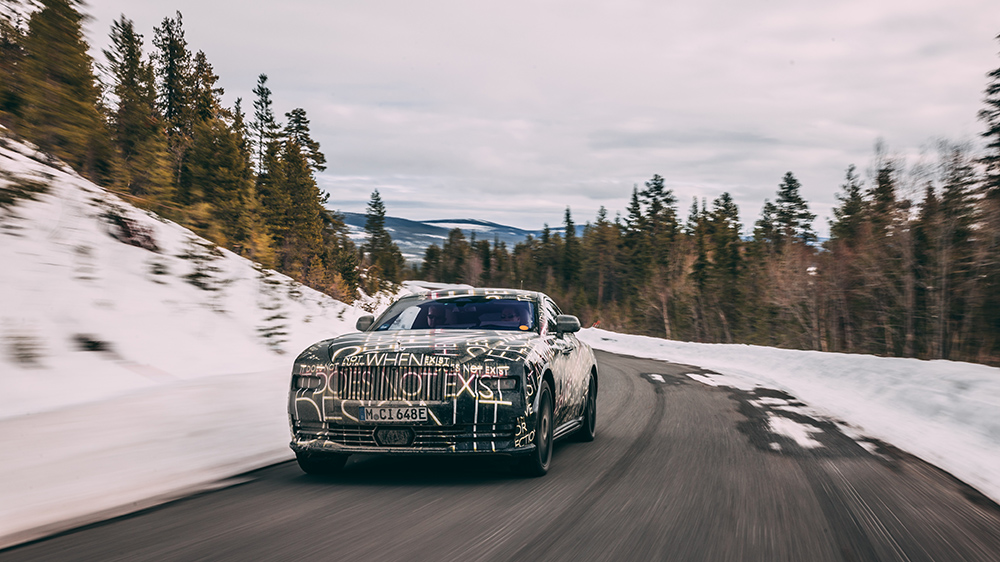 The storied British marque’s first all-electric car has just completed cold-weather testing. The important milestone puts the battery-powered coupé on pace to debut before the end of 2022, and go on sale next year.

The automaker announced on Wednesday that the weather-specific testing, a standard auto-industry practice, concluded in Arjeplog, Sweden, which is located just 34 miles from the Arctic Circle. There, the car endured -40˚C temperature and completed the first quarter of its 1.55 million-mile testing program, which is meant to simulate 400 years of use. There’s a reason why over 60 percent of the cars the brand has built are still on the road.

The latest Spectre announcement was accompanied by new set of images of the car. The photos show the camouflaged EV, which the brand calls the “definitive spiritual successor” to the Phantom, maneuvering through icy terrain. The two-door is built upon the marque’s all-aluminum spaceframe architecture and is said to be so generously proportioned that it’s been referred to as an “electric super coupé.” It will feature split lamps that harken back to its Goodwood roots and a fastback silhouette that should improve aerodynamics. The two-door will also ride on a set of 23-inch wheels, marking the first time since 1926 that one of the brand’s coupés has driven on tires that size.

We’ll have to wait until the car makes its debut to learn the vital engineering details, like how powerful it will be and how far it can travel on a single charge. For now, Rolls-Royce says the Spectre will be its most connected vehicle ever. Its “decentralized intelligence” will be able to harmonize 141,200 user interactions, 1,000 electronically controlled functions and more than 25,000 sub functions. The Phantom, for context, had 51,000 interactions, 456 functions and 647 sub functions, according to the automaker.

“The announcement of every new Rolls-Royce motor car carries a great weight of expectation, but Spectre is unquestionably the most anticipated product in the marque’s modern history,” CEO Torsten Müller-Ötvös said in a statement. “This is because it is much more than a product. It is a symbol for our bright, bold electric future, and it represents a seismic shift in our powertrain technology.”

Rolls-Royce is tidying up in preparation for the Spectre’s arrival. Last week, Müller-Ötvös confirmed that the automaker had closed the order books for the Wraith and Dawn globally, after having done so in the US in 2021. That means its lineup will shrink from five to three models before the launch of the brand’s first EV.

Either way, Rolls-Royce’s electric future is almost upon us.

Check out more photos of the Spectre below: