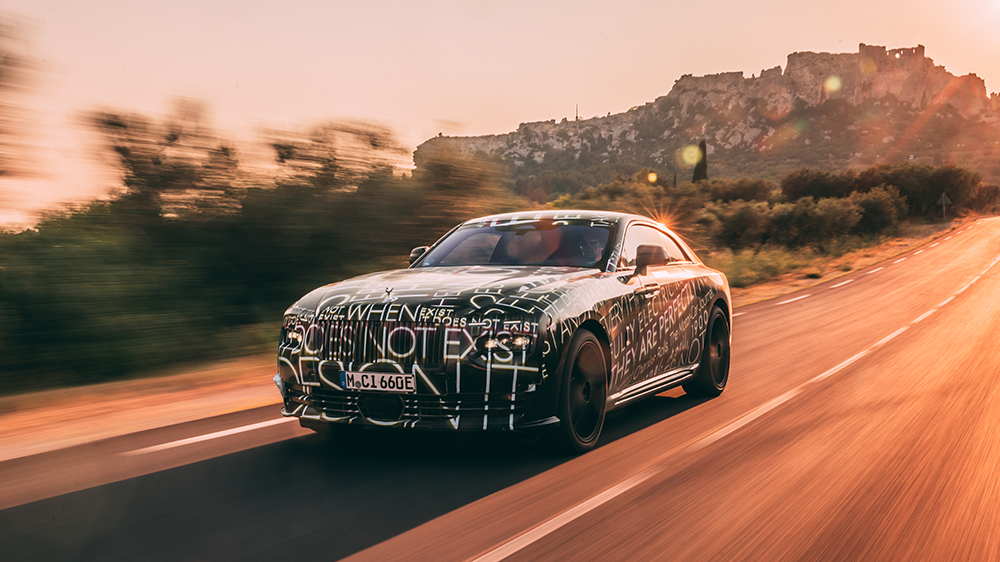 Rolls-Royce is still hard at work on its first EV, but that doesn’t mean there isn’t time for some fun in the sun.

The British luxury marque announced on Thursday that the eagerly anticipated all-electric Spectre is now in the midst of the second phase of testing. After being put through the paces near the Arctic Circle earlier this year, the automaker’s engineers are seeing what the battery-powered coupé can do on the French Riviera.

The Spectre is the first ultra-luxury EV designed with continental touring as its focus, so what better place to give it a serious run than along the Mediterranean coastline. Testing will be split into two segments, according to the automaker. The first will take place at the historic Autodrome de Miramas, which features a 3.1-mile track that allows the vehicle to be tested at continuous high speeds. The second will occur on the winding roads around the French Côte d’Azur. Many of the early production examples will be driven on those same roads before delivery. In total, the car will cover 388,000 miles of its 1.55 million-mile testing regimen while in the region.

Accompanying the announcement was a new set of pictures of the EV blasting along the area’s sunbaked roads. It’s still covered in camouflage, so it’s hard to make out body details, but the two-door has the stately air one expects of a Rolls. The company also announced that a brand-new smart suspension has been approved for the EV, which promises to deliver its trademark “magic carpet ride.” This new setup and reinforced aluminum space-frame architecture will combine to make the Spectre the most rigid model in the marque’s entire history.

“It is no exaggeration to state that Spectre is the most anticipated Rolls-Royce ever. Free from the restrictions connected to the internal combustion engine, our battery-electric vehicle will offer the purest expression of the Rolls-Royce experience in the marque’s 118-year history,” CEO Torsten Müller-Ötvös said in a statement. “This latest testing phase proves a suite of advanced technologies that underpin a symbolic shift for Rolls-Royce as it progresses towards a bright, bold, all-electric future.”

Although there is still a fair bit of testing to go—the automaker says the vehicle’s development is now 40 percent complete—we shouldn’t have to wait too long to see the Spectre in its full glory. Rolls-Royce expects the EV to make its debut before the year is out. Deliveries are slated to begin during the fourth quarter of 2023.

Click here to see all the photos of the Rolls-Royce Spectre EV.