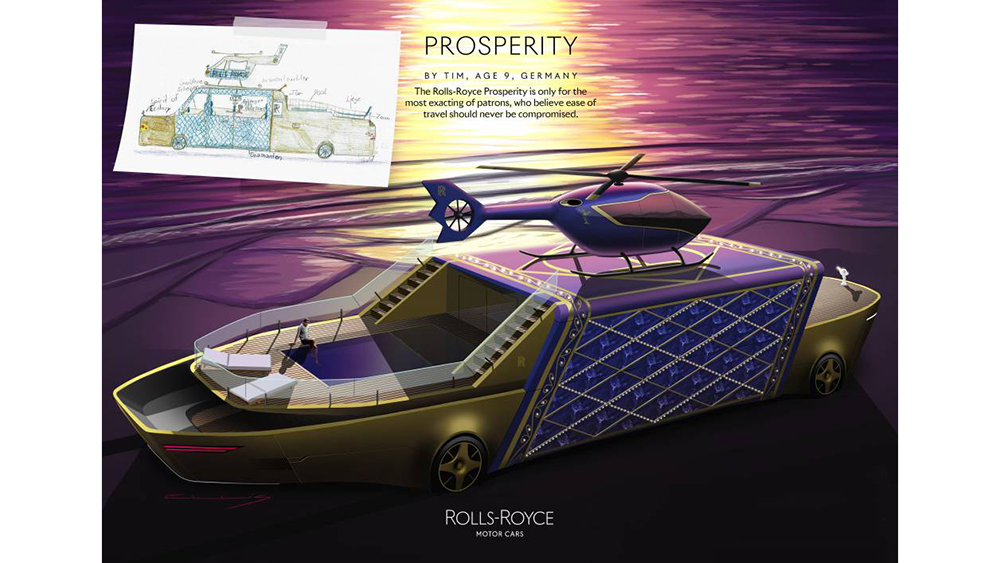 At the peak of pandemic anguish in April, Rolls-Royce launched a Young Designer Competiton to give children a chance to escape into the deep recesses of their imagination and draw their dream car. Now, the marque has announced the winning designs and turned them into digitally rendered illustrations that are nothing short of remarkable.

More than 5,000 kids aged 16 and under submitted fantastical sketches and there were no limits on creativity. The bolder, the better. The budding designers were inspired by everything, from turtles to intergalactic space travel. From the submissions, the judges crowned four category winners—Environment, Technology, Fantasy and Fun—along with one UK winner and three highly commended drawings.

Each winning design was transformed into render form by the Rolls-Royce Bespoke Design Team, using the same software and processes as they would with a ‘real’ Rolls. The four category winners, who hail from China, Japan, France and Hungary, will also enjoy a chauffeured trip to school with their bestie in a Rolls-Royce, of course.

Notable designs include the Bumblebee 5000 (above) penned by 11-year-old UK winner Sofia. This zoomorphic machine looks just like a bee and is powered by honey. It also has winged doors that open to reveal “a buzzing party atmosphere.” Next, there’s the Bluebird II designed by 13-year-old Chenyang from China. This futuristic vehicle, which topped the Technology category, can be driven on land, water or snow and is fast enough to break world speed records.

Another standout is the Turtle car envisioned by 16-year-old Florian from France. Inspired by land and sea turtles, it can soar across the sea, skies or streets and looks just like it belongs in a sharp EV lineup. Robb Report’s pick, however, was penned by 9-year-old Tim from Germany. His uber-luxurious dream machine (top) was designed “for the most exacting patrons” and features a helicopter on top to ensure the ease of travel is never compromised.

“There is some amazing talent out there, and I wouldn’t be surprised if some of our entrants went on to work as car designers one day—perhaps even at Rolls-Royce,” said Torsten Müller-Ötvös, CEO of Rolls-Royce. “The most important thing I’ve learned from this competition is that whatever our circumstances, we have the power to create amazing things, because our imagination is always free to fly.”

Check out the rest of the winning designs below:

The Capsule by Saya.  Rolls-Royce

House of Esperanto by Alisa.  Rolls-Royce