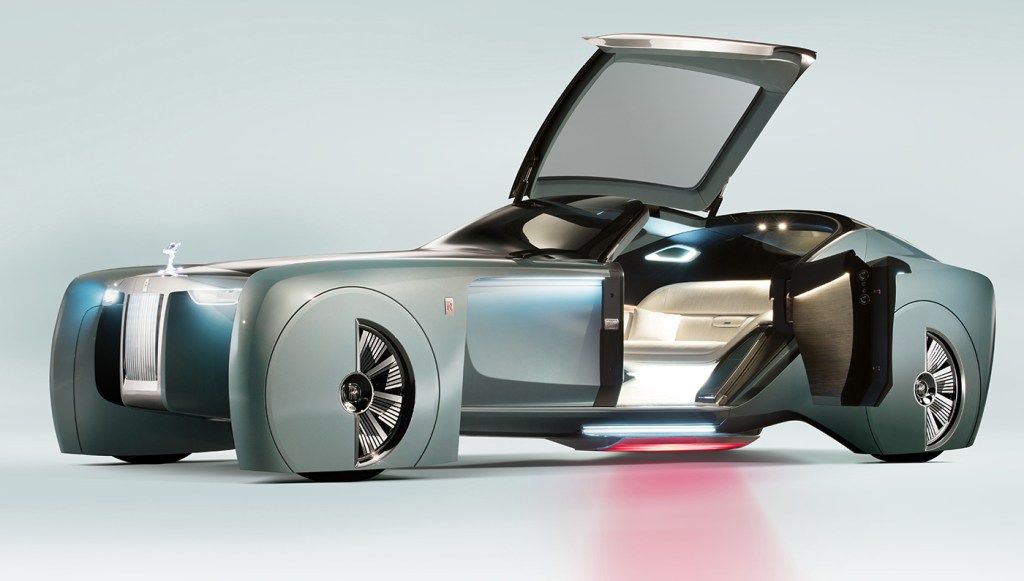 Rolls-Royce has debuted its first autonomous automobile—the Vision Next 100 concept—this morning in London. Already the benchmark for luxury driving experiences, the British marque has created a car that will serve as the owner’s chauffeur and personal assistant while powered completely by zero-emissions technology.

Code-named “103EX” while under development by director of design Giles Taylor and his team, the visionary vehicle was built off their four pillars of Personal Vision, Effortless Journey, Grand Sanctuary, and Grand Arrival. The first tenet comes from the fact that the car contains the “Voice of Eleanor,” a Siri-like smart system named after Eleanor Thornton, the model for the marque’s iconic Spirit of Ecstasy hood ornament. As the car’s artificial-intelligence platform, Eleanor will provide the next generation of connectivity—not only being able to call for the car to pick a person up, but actually handling the driving while getting to the destination in the most efficient way possible. The program will also manage an individual’s schedule, making suggestions on route selection, based on time and traffic, and adjusting accordingly. The otherworldly ride rolls on 28-inch covered wheels (crafted from 65 handmade pieces of aluminum) that are complemented by state-of-the-art suspension for an effortless journey.

And the Vision Next 100’s form is as impressive as its functionality. Each bespoke, hand-built example will measure a massive 19 feet long and over 5 feet tall and will feature an elongated hood and a hand-cut glass canopy. From the front, polished metal (pronounced on the Pantheon grille) rises over the nose and suspended laser headlights as well as extending along the doors and around the rear. This artistic element further delineates the two-tone color scheme, contrasting the dark glass upper body with the lower section’s shimmering silver “Crystal Water” treatment.

Inside, the completely customizable cabin will indeed be a grand sanctuary ensconced in Macassar wood paneling and deep-pile ivory wool carpeting. Enveloped in a plush silk sofa at the center, occupants will enjoy access to an expansive OLED screen at the front of the cabin (for entertainment or interaction with Eleanor) and a 360-degree view, sans the obsolete cockpit and steering wheel.

As part of what Rolls-Royce dubs “the Grand Arrival,” the glass canopy has been engineered to hinge on the left and lift while the single coach door simultaneously opens and a step appears from below the running board. In addition, the immediate area is illuminated in red light for a most distinctive debarkation.

Originally announced in March, the Vision Next 100 carries on the marque’s rich legacy while advancing the future of the entire automotive industry. When asked about the integration of autonomous technology last year, Rolls-Royce CEO Torsten Müller-Ötvös kept his cards close and joked, “We have been doing that for 105 years; it’s called a chauffeur.” Well played, sir, well played. (rolls-royce103ex.com)