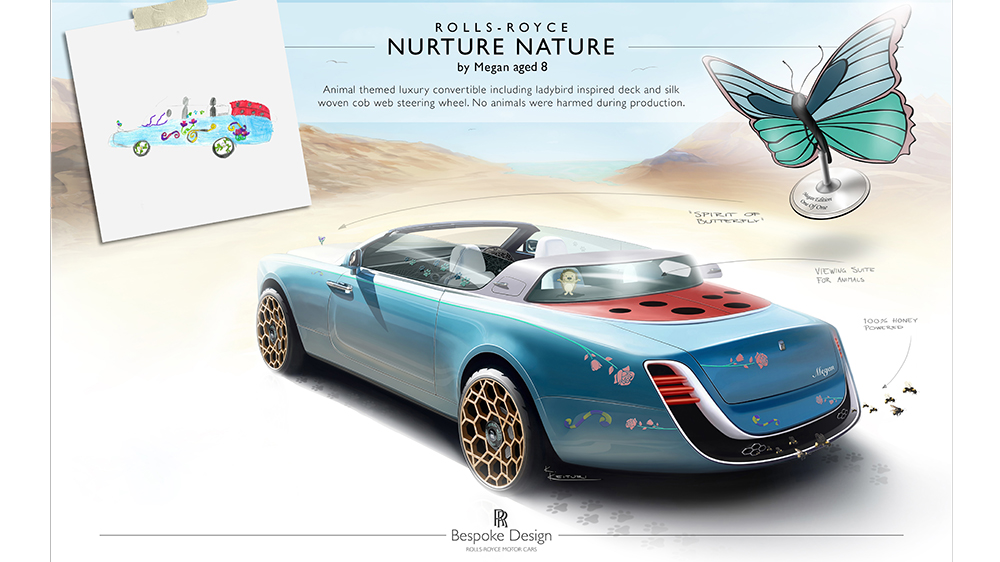 Over the last 114 years, Rolls-Royce has shown that it knows a thing or two about automobile design. But even a venerable brand with a regal sensibility can still use some fresh blood. And in this case, the reinvigorating force may be just eight years old.

This spring, when coronavirus outbreak kicked into high gear, the British automaker launched the Rolls-Royce Young Designer Competition as a way of helping to keep children around the world occupied. The competition proved to be such a success that the famed company was forced to extend the deadline multiple times because of the deluge of entries. And now, the marque has narrowed down the thousands of designs it received to a shortlist of 220.

As part of the contest, Rolls-Royce asked would-be designers age 16 and under to whip up the car of their dreams. The brand didn’t just ask them to come up with the exterior design, either; the entrants were urged to include the most outrageous and whimsical features they could think up. The short list of entries can all be viewed on the contest’s website and some have even been turned into fantastical renderings by the automaker.

A particularly outrageous design, from 5-year-old Lucie, depicts a vehicle that looks more like cotton candy than a car. Another, by 8-year-old Megan, is a animal-themed convertible aimed at auto enthusiasts who want to bring their car closer to nature. Among the sleek aqua blue roadster’s more notable features are a ladybird-inspired deck, a silk woven cob web steering wheel and honeycomb wheels.

“We’ve been absolutely overwhelmed by the international response to our Young Designer Competition,” said Rolls-Royce’s head of bespoke design Gavin Hartley. “And it’s not just the number of entries that has impressed us—the quality of the children’s designs is staggering, showing incredible imagination, creativity and flair. We wanted to give children the chance to let their imagination flow freely—it’s clearly struck a chord. They’ve responded magnificently—and given us an extremely difficult task in selecting our shortlist and winner!”

In total, the competition received over 5,000 entries from children in 80 countries. The eventual winner will have their design turned into a rendering by an actual Rolls-Royce designer and a chauffeur-driven Rolls-Royce ride for them and their best friend for the first day of school.