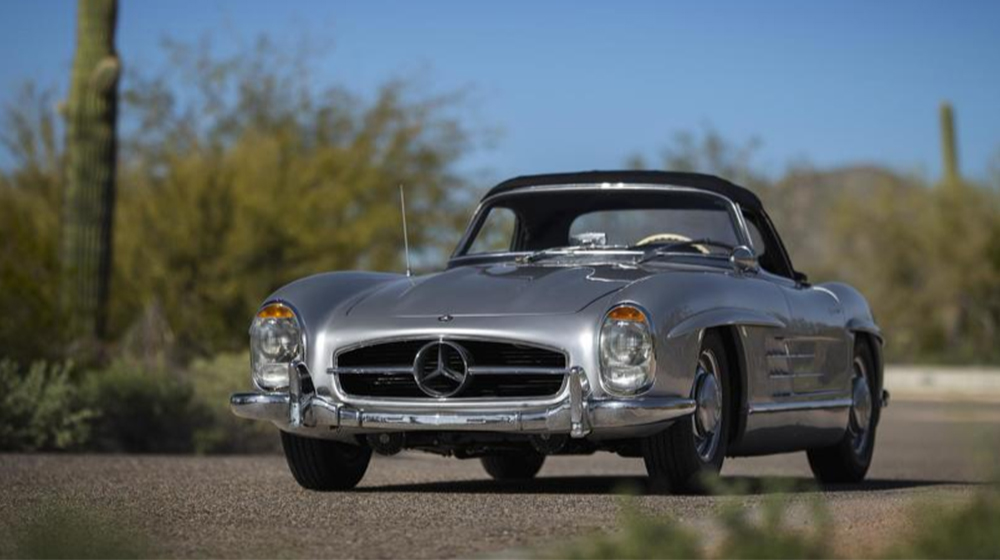 Automotive auction house Russo and Steele recently celebrated 20 years of auctioneering in Scottsdale by selling nearly $11 million in cars, led by a classic European triumvirate that echoed any number of racing finishes: Mercedes-Benz followed by Ferrari followed by Porsche.

In third place was a 1956 Porsche 356 Speedster that sold for $258,500, solid money for an air-cooled classic that has only mushroomed in value since Porsche went water-cooled in 1999. A plus for the car was a recent restoration, tight panel gaps and ownership by an Audi factory test driver.

In second, a 1971 Ferrari Daytona Spider conversion, which fetched $550,000. The car was turned into a convertible by fabled Ferrari importer Luigi Chinetti, which distinguishes it in provenance—but not looks—from factory-made Spiders, rare birds that have sold for more than $2 million.

Topping the Russo and Steele auction was perhaps that most iconic of post-war Mercedes models, the 300SL. While most enthusiasts have spent the past few decades obsessing over the mid-1950s Gullwing coupe version of that Mille Miglia–winning machine, appreciation has vaulted in recent years for the 300SL Roadster. Evidence of this is the $1,045,000 bid that secured ownership of this particular 1957 example.

Over the course of its six-year run, only 1,888 examples of the 300SL Roadster were made, with this one being among the 544 produced in the model’s inaugural year. Wearing classic German silver over black, the 300SL in question featured all matching-numbers hardware as well as an engine, gearbox and wiring harness refresh over the past few years.

Originally aimed at the fast-growing California market of the time, the 300SL Roadster would seem to offer less structural rigidity than its racing coupe counterpart. But thanks to a range of chassis improvements, the Roadster variant wound up offering its occupants an even more pliable ride than the Gullwing—all without having to step over foot-wide doorsills that appeared when those famous doors arched skyward.

Only 1,888 examples of the 300SL Roadster were made.  Photo: Courtesy of Russo and Steele.

This 300SL has enjoyed a sunny—if not entirely pampered—life, spending its first decade hitting the road in California before decamping for Arizona until 2017. At that point, it made its way to Brooklyn Motoren Werke in Wisconsin for a few years of TLC and parts refurbishment to make the car more roadworthy some 60 years after it first hit a showroom floor. About the only thing awaiting its next owner, beyond simply enjoying this masterpiece of German craftsmanship, is deciding whether to spring for a cosmetic refresh that brings this 300SL back to its original striking shade of jet-black over cream leather. Decisions, decisions.