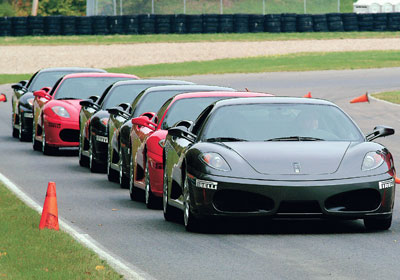 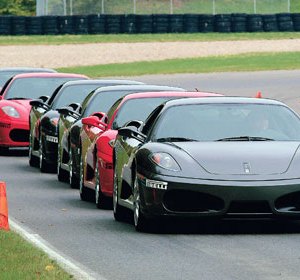 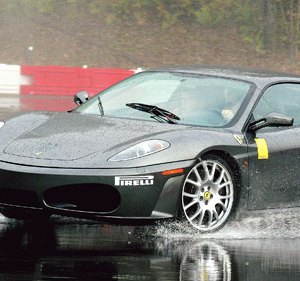 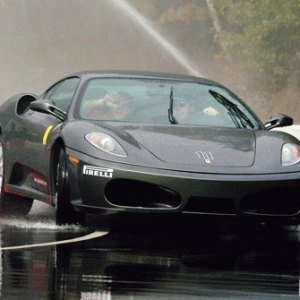 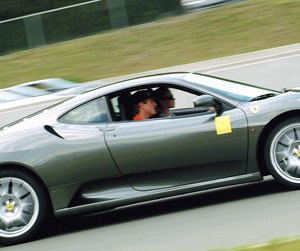 Like fingernails running down a chalkboard, Deep Purple’s “Highway Star” screeches from the speakers of the classroom’s plasma-screen television. Nobody gonna take my car / I’m gonna race it to the ground / Nobody gonna beat my car / It’s gonna break the speed of sound. . .

As the frenetic soundtrack reaches a crescendo, the TV flashes a video montage depicting death-defying feats of skill performed by Ferrari’s favorite son, Michael Schumacher. Having just enjoyed a peaceful night’s rest at the Hotel Quintessence—a relaxed yet sophisticated resort on the sleepy shore of Quebec’s Lac Tremblant—I am now properly on edge for a day of driving school. Oooh, it’s a killing machine . . .

Located less than 90 minutes north of Montreal, depending on the traffic and mode of transportation, Quintessence is only two miles from Le Circuit Mont-Tremblant. “We can arrange for a helicopter to pick you up from the hotel and bring you to the track,” says Andrew Torres, project manager of Ferrari North America’s driving programs, “but a car will get you here just as fast.” True, perhaps, if that car is a Ferrari equipped with a radar detector.

I am sitting on a red leather chair in a room with 15 other men, each of whom is wearing a red polo shirt and matching driving shoes. At first, I feel conspicuously out of place. Besides being the first journalist to attend the Ferrari Driving Experience at Le Circuit Mont-Tremblant, I also might be the first person to do so without owning a Ferrari, or a pair of red driving shoes. The former normally is a prerequisite; the latter, I presume, is just a preference. But this year Le Circuit has become Ferrari’s home away from home, and for two days, as a certified student and honorary member of the extended Ferrari family, I make it mine.

“My personal objective was to create the best experience possible, one that would meet and even exceed the Fiorano experience,” Nick Longhi, the chief instructor and program director at Mont-Tremblant, says in reference to the Ferrari test track in the carmaker’s hometown of Maranello, Italy. Longhi is an unassuming fellow whose curriculum vitae reads like a Speed Channel news crawl. Among his many accomplishments is a second-place finish in last year’s GT competition at the Rolex 24 at Daytona. A self-described race engineer, Longhi has driven in Rolex Grand-Am, American Le Mans, the Grand-Am Cup, Formula Fords, and Indy Lights. “I do a lot of testing and consulting for car manufacturers,” he says, “and for the media lab at MIT.” (Among the concepts that the Cambridge, Mass., university’s research center is exploring is one involving stackable, electric, two-passenger city vehicles that would operate on existing mass transit infrastructure.)

Longhi also has coached several Ferrari Challenge drivers, and nearly two years ago, after a lunch meeting with Ferrari North America president Maurizio Parlato, Longhi agreed to make the Ferrari Driving Experience one of his top priorities. “At most driving schools, you get the feeling that after a point they’re just scrambling to fill jobs,” Longhi says, “but here, we have a small group of the best guys that I could possibly put together. Because it’s Ferrari, we could afford the ultimate combination: good instructors and good racers.”

Longhi’s team consists of Indy and Daytona race winners, as well as factory-sponsored race winners. The team includes J.F. Dumoulin, Rolex 24-Hour GT winner and Grand-Am Cup champion; Darius “Dag” Grala, Ferrari Challenge champion, Daytona Prototype driver, and Jim Trueman award winner; Ryan Hunter-Reay, two-time Indy Car race winner and Nextel Cup driver; Matt Plumb, factory Acura driver, former JMB Ferrari factory driver, Formula Dodge champ, and Speed World Challenge rookie of the year; and Pierre Savoy, the gregarious racing commentator and highly entertaining classroom instructor who has tutored Patrick Carpentier, Greg Moore, Jacques Villeneuve, and other racers on the finer points of late apexes and throttle steering.“If you can be fast at Mont-Tremblant, you can be fast anywhere in the world,” Savoy says in his segue from the video presentation to classroom instruction. The track, which was constructed in 1964, was “built by drivers, for drivers,” he explains, “with a foundation three feet thick. It has blind corners. It has fast corners. It is a beautiful piece of asphalt.”

To verify his claim, we soon step out of the classroom and onto Le Circuit’s pit row, where 10 Ferrari F430s are parked in a line—a sight as beautiful as any piece of asphalt. Rosso Corso reds, Giallo Modena yellows, Nero Daytona blacks, and—my favorite—Grigio Silverstone grays are lined up in a row, just as they might appear at a future Concorso Italiano in Monterey.

For now, however, the cars serve as teaching instruments in which the other drivers and I first wend our way through a series of cones at a steady pace, and then accelerate to 60 mph before braking in a straight line. There is not much to it, really, except to remind yourself to use the entire width of the track and keep the car as close to the edge of the track as possible while braking. After a few runs at increasing speeds, I begin to develop a feel for the threshold—the point at which the wheels begin to slip and ABS intervenes—and thus learn the spacing necessary to slow a fast car before making a turn. “The gas pedal is not an on/off switch,” Savoy announces with an appropriate tone of condescension. “There is an infinite number of positions between full throttle and no throttle. Try them all.”

The wet skid pad, the second exercise in the sequence, reinforces this lesson. Basically a large, flat expanse of parking lot punctuated by twin circles of orange cones and equipped with its own industrial-strength sprinkler system, the skid pad is designed to simulate cornering. I wait my turn in line and watch as one driver after another loses control, spins, and creates a giant plume of water, the kind you might see—shown in slow motion—in any number of car commercials.

Finally, it is my turn to discover firsthand that in sport mode, the F430 will brake one or more wheels to prevent oversteer. Speed up, and before things become completely out of control, the car will even retard its throttle to keep itself on track. However, switch the manettino setting into race mode, which allows the wheels to spin, and as Savoy likes to say, “Hold onto your sphincter.”

In a safe setting, losing control of a car is thrilling, offering a sensation similar to one you enjoy while spinning in the teacup rides at Disneyland, but the object here is to correct the oversteer and maintain your intended direction. “You will have a panoramic view of the track if you get it wrong,” Savoy warned us earlier. “Eyes are completely in control of direction, so look where you want to go.”

As the sprinklers dampen the asphalt, the F430’s windshield wipers now keep time with my heart, which still beats in sync to Deep Purple. Eight cylinders all mine / Alright, hold on tight . . . Eventually, the delicate balancing act of easing off the throttle, hanging the tail out, and catching the slide becomes second nature. I nail one and squeeze the steering wheel to let out a celebratory horn honk. I love it and I need it / I bleed it, yeah it’s a wild hurricane / Alright hold tight / I’m a highway star.The Ferrari’s 4.3-liter V-8 sounds sweet even from inside the cockpit, and each F430 sings a slightly different tune, which becomes apparent only after driving a dozen of them back-to-back. All of the cars are quick, but some are a hair quicker and louder than others. Some suspensions creak, groan, or pop while turning, and some shift gears more smoothly. The common denominator is exhilarating speed, and as is the case with most drivers, the first time I crest the hill at Mont-Tremblant’s Turn 2, the F430 is moving faster than I need it to be. “The road goes to the left; trust it,” Savoy says from the passenger seat as I let the car drift to port.

The final exercise of the first day involves learning how to navigate the North Loop, which is as tricky as any section of any other track in the world. The South Loop is faster—150 mph is attainable on the back straightaway—but that section is not covered until the second day of school, along with figure eights on the wet skid pad. The braking, slalom, skid-pad, and looping exercises provide a tasty appetizer and entrée, and for dessert, the North and South Loops are tied together for some serious hot laps.

“Let’s see what you can do,” Dag Grala says after showing me what he can do, which is all the encouragement I need. With each lap, I become faster, until eventually, I pass one of the other drivers, just as one of them passed me the previous day. It is a victory of sorts, for although this is not a race, it still feels great to pass a Ferrari, in a Ferrari of your own. As Longhi notes, though, “If you’re driving a Ferrari, you’ve already won.”

The original plan, according to Nick Longhi, the chief instructor and program director for the Ferrari Driving Experience at Le Circuit Mont-Tremblant, was to open one school on the East Coast, make it a success, and then expand to the West Coast. “The difficulty is you have to have a great racetrack as opposed to a nice one. There are very few great racetracks in North America. Mont-Tremblant is one of them. We also needed a location with a Ferrari-level hotel experience nearby,” Longhi says, for the benefit of the participants as well as for their guests. The problem is that “you’ve now eliminated 95 percent of the racetracks in North America.”

Le Circuit’s owner, Lawrence Strohl, reconfigured the track five years ago to meet all safety requirements of the FIA, Formula One racing’s governing body. Strohl did that because, according to Longhi, “he’s a Ferrari fanatic. There’s no economic incentive whatsoever to create a track at this level.”

Half of next year’s Driving Experience spots already are spoken for. “Sixty-five percent of all new Ferrari customers are former Ferrari owners,” Longhi says, “and we’re seeing the same thing with the school. That’s why it’s difficult to get into a Ferrari and into the Ferrari Experience. It’s exactly parallel to the company’s philosophy that ownership is a privilege.” If you want to experience the privilege, the following information should prove useful.

Who can attend: The Ferrari Driving Experience is open to Ferrari owners only.

When to go: Driving courses run from May through September. Sign up well in advance, because the classes fill quickly.

How to get there: Limousine transportation from all Montreal airports is included, but options abound. Private jets can land at Mont-Tremblant International Airport (www.mtia.ca), which also is a destination for direct commercial flights from Newark and Toronto. True Ferraristi may prefer to drive: The region’s well-paved highways wind through the Laurentian Mountains, the oldest mountain range on the Canadian Shield.

Where to stay: Lodging at the Hotel Quintessence is included with the cost of the program. You can upgrade to one of the 1,200-square-foot QPrésidentielle suites ($1,350 per night), which have vaulted ceilings, wood-burning fireplaces, and private balconies with impressive views over Lac Tremblant.

What to wear: Evening attire is business casual.