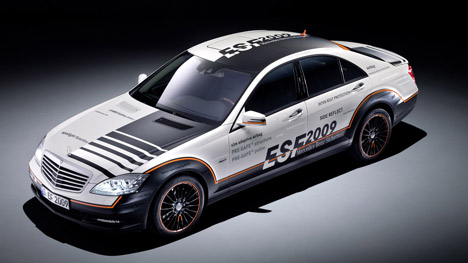 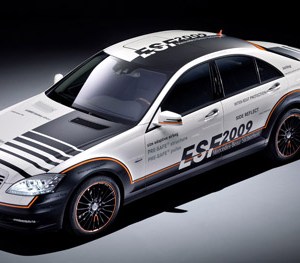 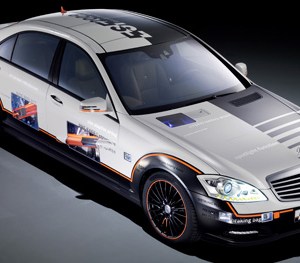 If you’ve ever walked away from a harrowing car wreck, chances are good that Mercedes-Benz had a hand in your survival — even if you weren’t driving a Mercedes at the time. The German automaker has been a safety innovator since the 1950s, developing features that have found their way into cars from every manufacturer on earth. Mercedes invented the “safety cage” passenger cell, for instance, and front- and rear-crumple zones, too. And during the 1970s, the company’s vigorous Experimental Safety Vehicle program (ESF in German) produced more than 30 concept cars designed to showcase its cutting-edge safety technology, including antilock brakes, traction control, stability control, and automotive air bags.

This year, Mercedes presents the radical ESF 2009, its first dedicated experimental safety car since 1974. Based on the new S400 Hybrid sedan (on sale now in Europe; coming soon to American showrooms), the ESF 2009 packs a dizzying array of occupant-protection gizmos designed not only to allow occupants walk away from a crash, but to help them avoid one in the first place.

Air-bag technology figures prominently in the ESF 2009. The car has plenty of inflatable parts—in the usual locations, of course, but also in places you might not expect. There’s a curtain air bag that drops down between the seats to prevent occupants from knocking heads during a side impact and air bags on the seatbelts that more evenly distribute deceleration force across the wearer’s chest. The ESF 2009 also utilizes the truly newfangled “braking bag”—an air bag mounted beneath the front end of car—that inflates when a frontal collision is inevitable, slowing the car by increasing friction with the ground and keeping the front end from diving during hard braking and possibly plowing underneath the rear end of a larger vehicle. And beneath its familiar S-class skin, the ESF features a series of “folded” internal metal structures that (like an air mattress, says Mercedes) inflate with an enormous and instantaneous charge of pressurized gas, providing additional structural stability during a collision.

On the crash-avoidance front, the ESF 2009 boasts a rear-seat camera that feeds to a dash-mounted display, to monitor kids’ doings without having to glance over your shoulder; tire sidewalls are made of highly reflective material for better nighttime visibility; and headlamps that incorporate a “spotlight” function that (with the car’s thermal-imaging Night View system) identifies and shines a beam of light at potential hazards on or just off the road—like a wayward deer or a pedestrian. And because it takes a village, a clever two-way radio system allows the ESF instantly to relay pertinent data about road conditions—an icy patch, for instance, as detected by its antilock braking system—to other cars on the road, allowing drivers behind to slow down, change lanes, or take some other evasive action.

Doubtless, a few of these new-age safety features (there are more than a dozen) are destined to be recalled as little more than concept-car flights of fancy. But if Mercedes-Benz history is a guide, much of the ESF 2009’s advanced thinking will land in a production vehicle before long. And for somebody—maybe even you—that could be a lifesaver. (www.mbusa.com)