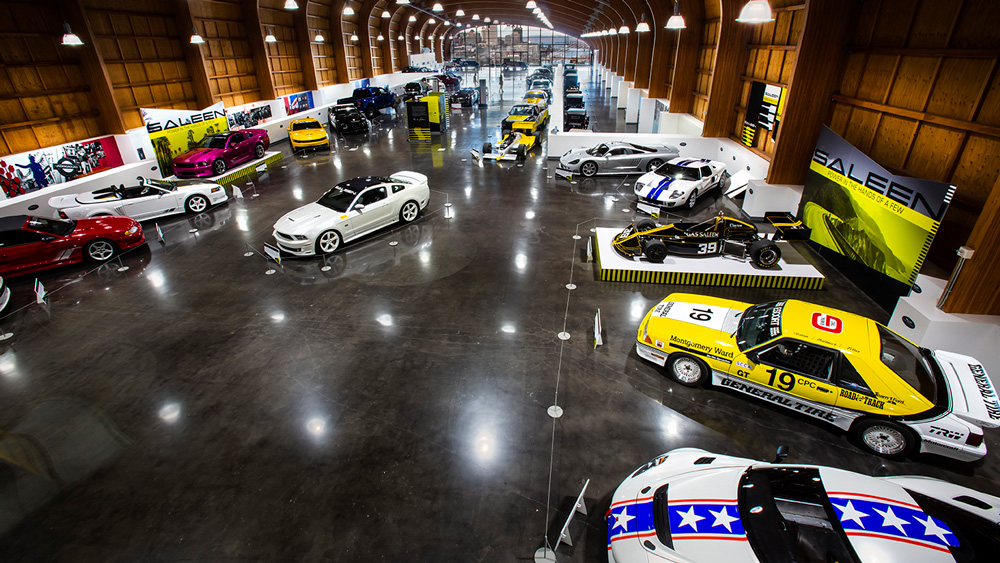 Always focused on his next big project, Steve Saleen says he’s never been one to reflect. However, now that there’s a museum exhibit that looks back on his nearly half-century of automotive achievements, he may begin to consider his legacy more frequently moving forward.

Recently, LeMay—which bills itself as America’s Car Museum—in Tacoma, Wash., opened “Saleen: A Journey from the Heart of a Racer to America’s Supercar.” The retrospective features many of the vehicular hallmarks that helped define his Saleen Automotive brand over the past 36 years.

As Saleen became one of the world’s most famous Ford Mustang tuners, the majority of the exhibit features, not surprisingly, Mustangs. From the first 1984 Saleen Mustang—with 175 hp— to the current generation—the 800 hp Saleen S302 Black Label Mustang—the museum has the best-known part of his career covered.

But the year-long exhibition also features the cars of Saleen’s lesser-known, but just as impressive, racing years. A March 76B Formula Atlantic—the machine in which Saleen set 13 track records and earned the 1977 Pacific Coast Championship—sits steps away from the 88 March Indy Car that made Saleen the fastest rookie at Indianapolis in 1988.

Of course, a Steve Saleen retrospective would be incomplete without his built-from-the-ground-up S7 supercar. The S7 on display is actually the company’s first production unit, which ended up getting screen time in the film Bruce Almighty. Even Saleen Automotive’s second ground-up project, the 2020 S1 sports car, features twice at the LeMay.

“When you think of a museum, you tend to think of a museum as old, but I look at the display that we did as much more of a living, current museum,” Saleen explains, emphasizing that his exhibition features vehicles both old and yet to be released.

In a bit of ironic timing, the Saleen Retrospective debuted during the opening weekend of Ford v Ferrari. “We do have our own ‘Saleen versus Ferrari’ [story],” he mentions. Saleen is referring to the S7R’s 2004 victory that bested Ferrari on its home track at Imola. “I also feel that we have a piece of the Ford versus Ferrari [story] in the fact that we did the Ford GT for Ford.” Indeed, the Blue Oval hired Saleen Automotive to engineer and manufacture the first-generation, 2005-2006 Ford GT, which also makes an exhibit cameo.

Looking back at Saleen’s dynamic history, I wondered why no movie had yet existed documenting his life. “I’m still writing the book,” Saleen says, adding that the project has been somewhat in the works. “It seems like you almost have to die [to have a film made about you], so I hope that portion of the movie is another hundred years out.”

Saleen, whose influences include racing drivers such as George Follmer, Dan Gurney, Parnelli Jones and Swede Savage, also derives inspiration from Walt Disney, citing the visionary’s “pursuit of perfection, and what you can dream, you can actually create.”

The year-long exhibition features Saleen’s Mustangs as well as cars from his racing years.  Photo: Courtesy of LeMay—America’s Car Museum.

But with record-breaking crowds lining up far outside the LeMay’s doors to get a peek, this lifetime retrospective’s public reception was a pleasant surprise for Saleen. “The enthusiasm and the response was a bit more than I had anticipated,” Saleen explains. “The fact that we had a lot of young people, that, to me, was very gratifying.”

The line to see the man and his machines.  Photo: Courtesy of LeMay—America’s Car Museum.

In parting, Saleen suggested he may become more self-reflective as he continues to write the chapters of his life. “The older you get,” he said, “you realize that having that [past] perspective is really key to keep you on course for new adventures.” Well, then here’s to another hundred years of high-horsepower adventures.