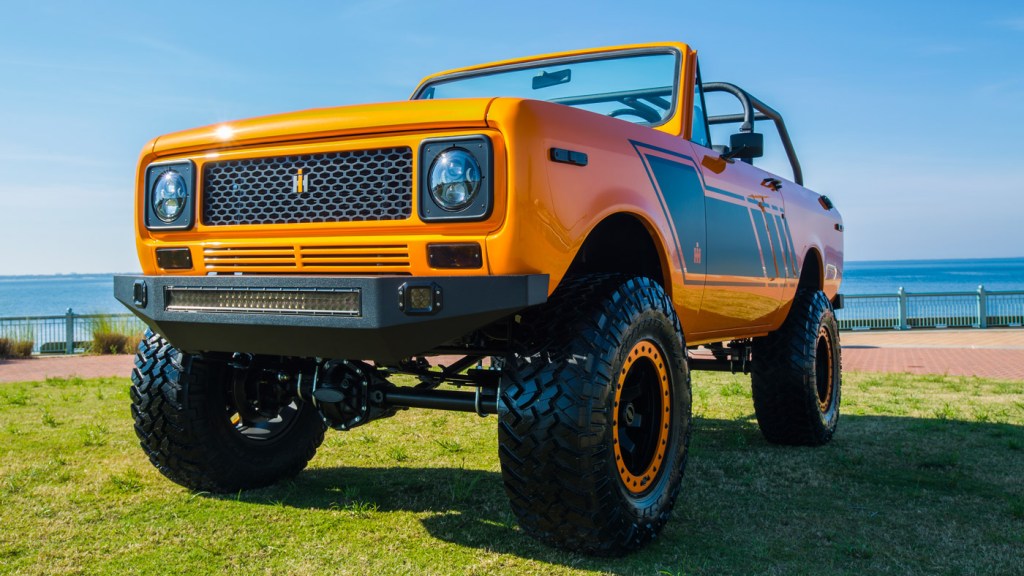 There are plenty of head-turning new cars available to anyone wanting to make a splash, especially when cost is no object. But even the rarest of Ferraris or Porsches are seldom one-of-a-kind machines that stop both traffic and conversation—which is exactly why shops like Velocity Restorations are thriving. The Florida-based company has a simple motto that leaves no question about its mission: “Breathing New Life into American Classics.”

That’s as apt a description as any for Velocity Restorations’ latest creation: a reborn 1979 International Harvester Scout II. Originally a classic (though forgotten) 4×4 that was found languishing in a Texas oil field, it was recently brought back to glowing, topless life—replated nut by replated nut.

International Harvester’s Scout model is a particularly good choice for anyone looking for a truly unique ride. For decades, the company provided consumers with an option to the ubiquitous and more well-known Jeep. The Scout II, built between 1971 and 1980, represented the final iteration of the firm’s foray into the category.

A total of 1,500 hours of hand labor was required for this remarkable restomod.  Photo: Courtesy Velocity Restorations.

Velocity’s 1,500 hours of hand labor on this Scout II resulted in a $229,000 off-road beast with a 430 hp LS3 motor, bright orange paintwork, and custom touches to spare, guaranteeing that its new owner will stand out in any 4×4 crowd.

“No one has gone to these extremes with a Scout, but I think slowly these amazing vehicles are starting to get the recognition they deserve,” says Brandon Segers, owner of Velocity Restorations. Segers is working on another Scout II and will soon get down to business on a few first-generation Scout I machines that will carry price tags of around $250,000 each, due to additional work needed to modernize that off-roader’s suspension.

Velocity’s approach to tackling these vintage vehicles—the team also does a brisk business in iconic Ford Bronco and old Land Cruiser restomods—is to retain the aesthetic integrity of the original models while making sure modern parts and upgrades render them compliant for day-to-day driving.

For this Scout II, that meant four-wheel disc brakes all around, a dual exhaust, and a reliable General Motors 4L70E transmission capable of handling up to 650 hp. The custom touches included paint and graphics, Dakota digital dash gauges, a handcrafted sheet-metal engine bay, and a one-off grill treatment. A six-inch lift along with massive Nitto Trail Grappler tires cap the muscle-bound look.

“This whole project started with pencil and paper and pure imagination, so there’s truly not another one out there like it,” says Segers, who sold this particular Scout to a New York collector recently bitten by the 4×4 craze. “You could certainly take it off the road, but mostly our vehicles are for the lake house or the beach, for taking your family out on a hot Fourth of July night.”