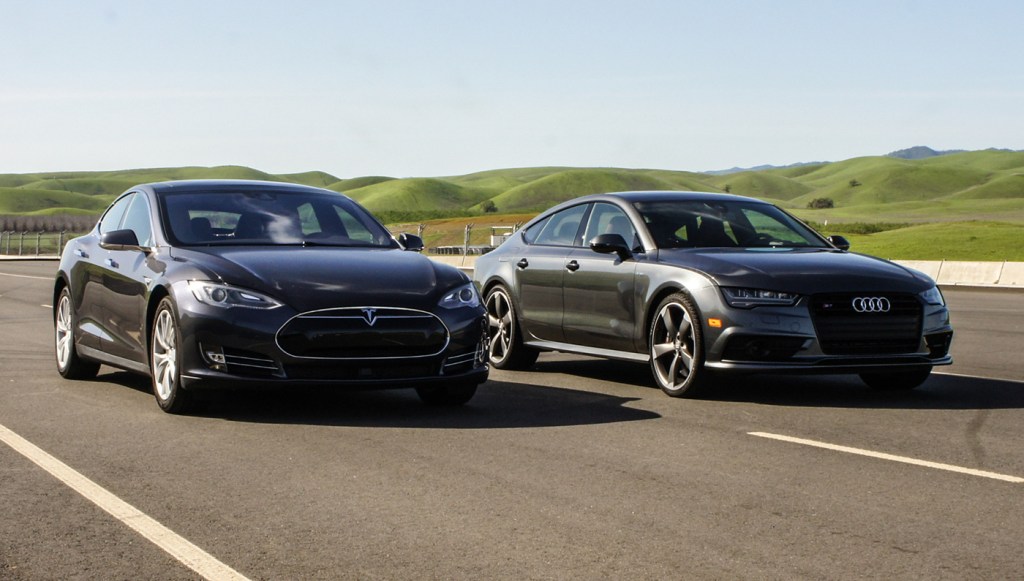 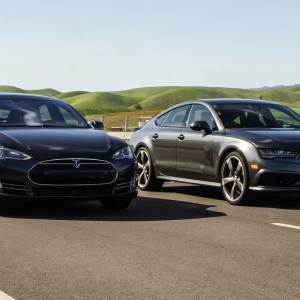 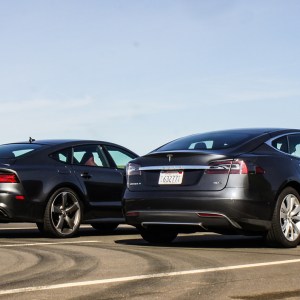 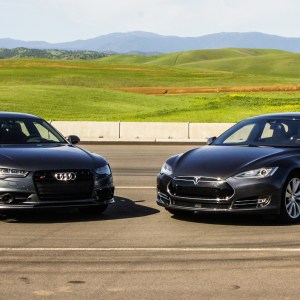 Gasoline versus electric. The Old World versus the new. These primal conflicts play out in today’s automotive landscape. Perfectly embodying each side of this struggle sit the 2016 Audi S7 and the 2016 Tesla Model S 90D.

Tesla represents the future, a window into how the average driver will experience the road in five or 10 years. Its Model S eschews legacy, automatically turning on when you get in. A 4G/LTE data connection comes standard, connecting the car to Tesla for periodic software updates and letting drivers navigate with Google maps, listen to Internet-based radio stations and even browse the web. Favoring a giant touchscreen in the cabin, the dashboard is essentially bare of buttons.

The S7 evenly matches the Model S 90D with its own 4G/LTE data connection, and also shows Google-derived maps in its navigation system.

Pitting the S7 and Model S 90D against each other, we considered how it would be to live with each as a daily driver, how they handled on a racetrack, and the pure acceleration of a drag race.

Where the S7 makes you hit a start button to fire up the engine, the Model S 90D exhibits its future-forward style by readying itself to go as soon as you enter the car. And lacking a transmission tunnel, the Model S cabin feels light and airy, offering elbow room and minimal barrier between the driver and passengers. The S7 may have premium cabin appointments, but its seats feel a little more cramped, cocooning you among its controls and trim.

And where the S7 comes with a dial, buttons, and touchpad to control content on its retractable LCD, the Model S simplifies control of its infotainment system with one massive touchscreen. The S7 infotainment interface takes a little learning but offers many convenient connected features, even showing Google Earth–derived maps for navigation and integrating Google for destination searches. The Model S also relies heavily on Google for navigation, and its larger screen allows for easier-to-find menus.

Both cars drive very comfortably on public roads, although where the S7 shows the power dips of an internal combustion engine, the Model S electric motors make for continual, direct power delivery. Each car’s air suspension makes for a smooth ride, but the S7’s lower-profile tires can be a bit harsh over bumps. Steering-wheel heft proves similar between each car, lightly tuned to make for quick, low-effort turning.

The throttle feel between gasoline and electric is decidedly different, but for everyday driving, slogging through traffic or stopping for red lights, the S7 and Model S behave similarly, allowing easy modulation of accelerator and brake.

For pure efficiency, the Model S blows away the S7, boasting an EPA-rated 100 mpg equivalent compared to 21 mpg for combined city-and-highway mileage. While that efficiency is nice to boast about, the S7 can be refueled in minutes where it takes hours on a 240-volt Level 2 charging station to bring the Model S batteries to full. Tesla mitigates that a bit with its Level 3 Supercharger stations, adding 170 miles of range in just half an hour.

At 288 miles, the Model S 90D’s range is the best of the current Tesla lineup, and certainly enough for most daily driving. It’s also considerably cheaper to run the Model S over the S7, with the EPA estimating annual fuel costs of around $650 for the Tesla, and around $1,750 for the Audi.

The Model S had one extra trick up its sleeve: AutoPilot. This relatively new driver-assistance feature combines adaptive cruise control and lane-keeping assistance to make for near-effortless driving on highways and in stop-and-go traffic. The system keeps the Model S nicely centered in its lane while maintaining a safe following distance from traffic ahead. The S7 also can be equipped with similar driver-assistance features, but they are not nearly as sophisticated.

While these cars come very close, we give the Tesla Model S 90D the nod for everyday livability.

Although the S7 and Model S 90D are clearly road cars, we took them to Thunderhill Raceway Park in California to see how they matched up in performance driving. The S7 brings Audi Quattro all-wheel drive accentuated by an optional Sport Differential, this latter component vectoring torque across the rear wheels. That results in sharper handling, as the outside wheel in a turn gets more power, helping to push the back end of the car around. The S7’s automated manual makes for lightning-fast shifts, so you can really dig into its 450 hp in the turns, using the engine to enhance handling.

The Model S 90D is missing one thing for the track: a “P.” In the Tesla lexicon, P stands for performance, and the company tunes its P90D for sport driving. The 90D, left with standard street tuning, doesn’t bring much to the track. Its air suspension adapts for faster driving, and its dual motor setup means all wheels are grabbing pavement.

The S7 showed its expertise around Thunderhill’s tight, technical turns, letting our drivers carry speed into the corners, point the wheel, and rotate neatly on the apexes. In Dynamic mode for both the suspension and the steering and traction control, it proved nimble, surprising for such a large car. Minor body roll showed it wasn’t as dedicated a sports driver as some cars you can buy, but few owners will put it through these paces.

Surprisingly, the Model S 90D almost kept pace with the S7. It exhibited very steady behavior when our drivers took it through the turns, doing a good job of keeping grip and maintaining a line. There are no sport settings to activate, so the 90D had to figure out what the drivers wanted. Contributing significantly to its handling was the battery pack, the weighty component’s position nestled in the chassis between front and rear wheels creating a very low center of gravity.

Ultimately, the S7 proved the winner of our handling test, although the 90D gave it a very good run.

When we decided on a drag race between the S7 and Model S 90D, we thought the Tesla was a sure win. Electric motors mean instant torque, and we had previously experienced the aptly named Ludicrous acceleration of the Model S P90D Plus. The 90D may only boast 485 ft lbs of torque compared to the P90D Plus’s 713, but it is still more than the S7’s 406 ft lbs.

But what we thought was a foregone conclusion ended as a rout for the Tesla. Where editor Antuan Goodwin was able to set the S7’s launch control, maximizing off-the-line grip, Wayne Cunningham, behind the wheel of the Tesla, could only mash the accelerator. The S7 leaped off the line, grabbing a step ahead of the Model S 90D, and held its place in the lead.

Both cars maintained relative positions up to 60 mph, but the S7 began to pull away as speed built, its 450 horsepower making the difference over the Model S 90D’s 417. Over repeated runs, the S7 proved the quicker car.

So what of the posted zero-to-60 mph times? Tesla notes on its website that it uses a rolling-start method to calculate its time, derived from how Motor Trend conducts its instrumented test. Our decision to go with a traditional drag strip standing start ended up a win for the S7.

Both the Audi S7 and Tesla Model S 90D are phenomenally good cars, and we found them running very close in all of our tests. While the Model S 90D was the car we wanted to get into each morning for the daily commute, the S7’s better track performance made it our pick as the winner of this shoot-out.

Of course, the Tesla’s electric drivetrain will be the deciding factor for most people, either for or against. With its range, the Model S 90D makes itself more versatile than most electric cars on the market. But longer trips require more planning, whereas the S7 lets you make quick fill-ups, meaning less worry. (audiusa.com, tesla.com)