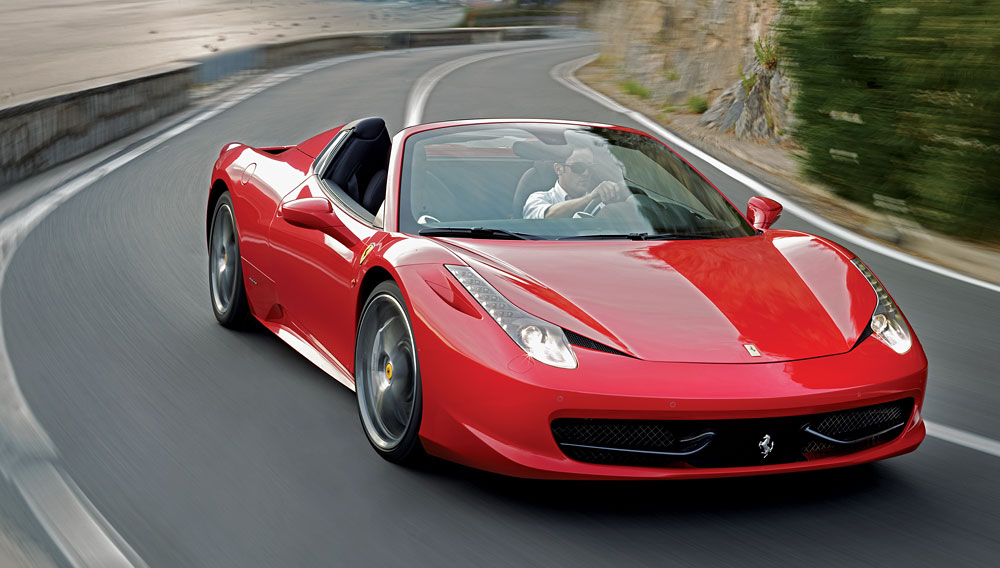 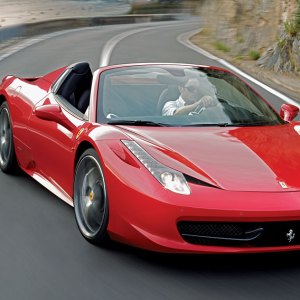 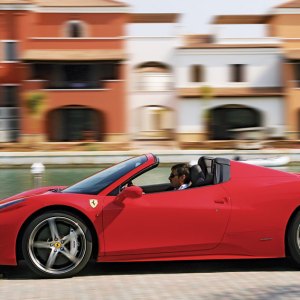 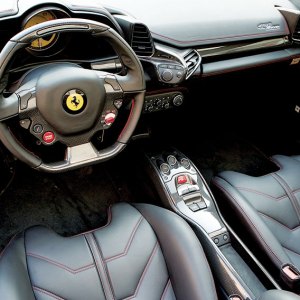 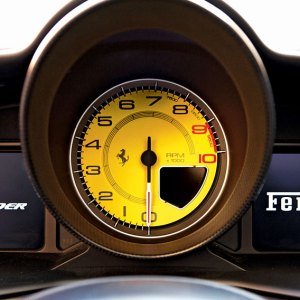 Although it has been re-engineered and reshaped to accommodate its ingeniously designed retractable top, the Ferrari 458 Spider is essentially a convertible version of the 458 Italia coupe. But the folks at Ferrari expect the new model to serve a completely different purpose and attract a different type of driver.

Typical Italia owners, Ferrari’s research shows, bring out their cars only on weekends for brief, very fast rides on racetracks or mostly empty roads. On the other hand, those who buy the Spider, which is scheduled to go on sale in the United States early this year for about $257,000, will want a car that is every bit as sporty as the Italia. But they will drive their Spiders daily, for longer distances, on city roads, and often accompanied by a passenger. They will enjoy the wind in their hair and the bellow of the exhaust, but they will not be as inclined as Italia owners are to test the performance limits of their car; they will drive less aggressively.

Don’t tell that to the police officer who was patrolling Italy’s La Cisa pass one sunny afternoon this past fall. He and the automotive writers he stopped would scoff at the notion that the Spider’s laid-back top will induce laid-back driving.

The pass leads through the Apennine Mountains in northern Italy, from the dairy farms of Emilia-Romagna to the quaint beach town of La Spezia on Liguria’s Mediterranean coast. The route—which provides majestic views of the Taro River valley and includes the hill-climb course that Enzo Ferrari drove in his first race, in 1919—served as the test track for writers attending Ferrari’s media launch of the 458 Spider in October.

Like the Italia, the Spider is powered by Ferrari’s latest direct-injection, 4.5-liter V-8, which is mounted longitudinally behind the cockpit. The engine produces 562 hp and 398 ft lbs of torque. The F430, the Spider’s convertible predecessor, has a 4.3-liter V-8 that generates 490 hp and 343 ft lbs of torque. The additional power enables the Spider to storm from zero to 60 mph in about 3.2 seconds, which is nearly a half second quicker than the F430.

Compared to the F430, the Spider also offers more responsive steering and more cornering agility. Ferrari credits the improvements to a retuned suspension and magnetic ride-control shock absorbers that adapt almost instantaneously to changes in the road surface and in the car’s speed and direction.

Lowering the top provides unfiltered exposure to the rambunctious rhapsody emanating from over your shoulder, where the V-8 inhales and exhales through an intake and exhaust that have been revised from the Italia’s configuration to suit the design of the retractable roof. When the crankshaft furiously spins toward the 9,000-rpm redline, the V-8 shouts in your ear, urging you to charge into corners and make short work of long straights.

La Cisa evokes the region’s favorite primo piatto, containing as many twists as a heap of tagliatelle. Waiting around one of those turns, on a narrow forest lane leading into a village, was a local vigile. He was waving a wooden placard that indicated we should pull to the side of the road.

The police officer spoke no English, but we quickly established that he wanted to see a driver’s license. Apparently a few Ferraris had roared through his town that morning, and he was out to curtail the speed and noise of any others that entered his jurisdiction.

The encounter ended with the officer patting the Ferrari’s fender, waving us on, and turning his attention toward the sound of another Spider yowling through the woods. The car’s exhaust system, it seems, negates any need for radar guns.

The 458 Spider features the all-aluminum chassis architecture that Ferrari debuted with the 360 and continued with the F430. But for the Spider, the carmaker has significantly increased the strength and rigidity of the chassis by reinforcing the doorsills and adding structural buttresses behind the cockpit. Ferrari CEO Amedeo Felisa says he prefers using aluminum alloys instead of carbon composites because the pound or two of weight savings that comes with carbon does not justify the higher cost. More important for customers, it is easier to repair aluminum components if they are damaged in a collision.

A Ferrari is judged less for its chassis than for its shape, and on the latter count the Spider also excels, thanks especially to the swoopy buttresses and rear styling, which differ from the Italia’s. Airflow management played a key role in determining the design of the buttresses, engine cover, and rear spoiler. Ferrari employed computational fluid dynamics (CFD) engineering software to create a shape that directs air over the roof and laterally along the upper sides of the car and into the engine and radiators. While cooling those components, the airflow also enhances rear downforce.

Because the hard-top stowage compartment would obscure most of the view of the engine, Ferrari eliminated the glass portion of the engine cover that it used for the Italia. Cooling grilles on the revised engine cover suck air from the roof and into intake ducts that form the lower portion of the rear spoiler. The curvature of the buttresses reduces turbulence behind the rear window, creating a high-pressure zone that pushes down on the rear spoiler and increases the car’s grip.

The Spider’s front-end styling is the same as the Italia’s, including the flexible winglets located in the lower fascia, which deflect airflow over the radiators while adding downforce. The winglets’ elasticity enables them to transform their shape at high speeds to reduce drag. Deflectors mounted at the rear edges of the front wheel wells reduce drag by forcing air to flow along the car’s lower body.

With a soundtrack that goes from a muted growl to a basso profundo snarl punctuated by a hissy sniffle between gear changes, the 458 Spider offers a driving experience that is aurally invigorating. The ride was especially entertaining as we passed the low stone retaining walls that line the mountain pass and during the return trip from La Spezia to our starting point in the town of Reggio Emilia, when we drove through the tunnels of the Autocamionale della Cisa.

Even without its roaring sounds, the V-8 still could prod a driver into heavy foot tapping. At 4,500 rpm, only halfway to its redline, the engine can push the car to 110 mph in seventh gear. From there, a stab on the throttle will have the Spider rocketing past the 150-mph mark in an instant.

The Spider’s steering is sublime, as good as the perennial benchmark set by the Porsche 911. In concert with the magnetic ride-control damping system, the steering makes the Spider incredibly agile and lends the driver an air of confidence when pushing the car hard, even on rough road surfaces. Accelerating quickly out of a tight corner will get the Spider’s tail out, but then the car digs in with help from the E-Diff electronic differential and F-1Trac traction control, Ferrari’s race-derived electronic aids.

The 458 Spider can be driven as though it were a road racer, but just meandering around town the car does not become a high-strung, ill-mannered diva, as other high-performance machines do. Indeed, some of the characteristics that make the Spider so receptive to aggressive driving—the engine’s broad power band, the smooth-shifting gearbox, the variable adjustable suspension, the airflow management that leaves the cockpit draft-free at all speeds—contribute to its finesse as a cruiser.

Ferrari has described the 458 Spider’s top as a “simple answer to a complex problem.” That simple answer required six years of development, five design concepts, rerouting and re-engineering of the 458 Italia coupe’s intake and exhaust system, and extensive aerodynamic-related revamping of the Italia’s rear bodywork.

Unlike the roof of the 575 Superamerica, which is a single retractable panel that flips backward and remains exposed, the Spider’s top folds away into a storage compartment hidden under the buttresses behind the cockpit. The process lasts about 14 seconds.

The hard top and its retracting mechanism make the Spider about 100 pounds heavier than the Italia. But compared to those of the cloth-topped F430, the Spider’s roof components are 55 pounds lighter and consume half the space. The more compact design allows for more legroom for the driver and passenger and for a rear parcel shelf spacious enough to hold a full-size golf bag.

The Spider’s power-operated glass rear window serves as a wind stop when the top is retracted, eliminating the inconveniences associated with mounting and storing the mesh windscreens that come with traditional convertible tops. The rear window lowers completely as the hard top folds away. Once the top has been stowed, the window rises to a height that Ferrari’s computerized airflow studies have determined is optimal for deflecting the wind away from the cockpit. The driver can also raise or lower the window to desired heights.