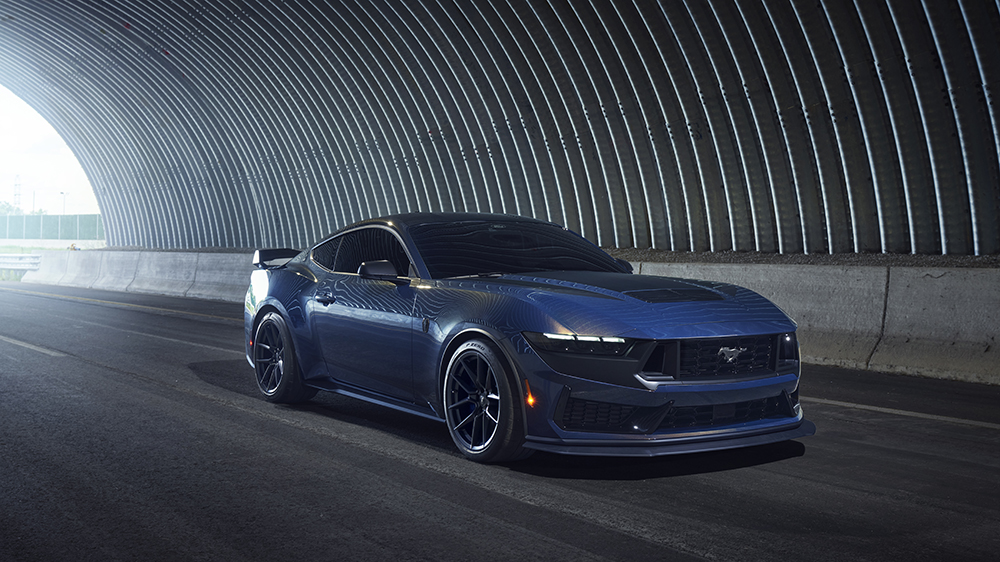 After years of speculation, the new Ford Mustang is finally here. And with it comes a new variant.

The seventh-generation pony car wasn’t all Ford had up its sleeve on Wednesday night. It also unveiled the brand-new Mustang Dark Horse, a track-centric speed machine sure to remind enthusiasts of the muscle car’s 1960s and ‘70s glory days.

The Dark Horse is the first new Mustang performance series in 21 years, according to the brand. It’s actually two models, both of which are based on the new Mustang GT—the Dark Horse S and the Dark Horse R. The two track-only beasts are very similar to one another, but the former was designed for weekend warriors and the latter for organized racing. The Dark Horse R has actually been serialized by Ford so that it can compete in proper motorsports events all over the world.

Whichever Dark Horse you choose, it comes exclusively with the seventh-generation Mustang’s naturally aspirated Coyote 5.0-liter V-8. The refreshed mill has been further enhanced with a dual throttle-body intake design and piston connecting rods from the GT500. It comes paired with either a Tremec six-speed manual or Ford’s own 10-speed automatic. Whichever gearbox you opt for—as if that’s really a question—it’ll send a monstrous amount of power to the rear axle via a Torsen limited-slip differential. Performance numbers were not available as of press time, but Ford says its targeting an output of 500 hp.

The Dark Horse is equipped with a number of other track upgrades. It features a full FIA-certified safety cage, safety nets, race seats with safety belts and a race steering wheel with a quick disconnect, according to the brand. The car also has a racing fuel cell for added range, welded seams for added strength, MagneRide dampers and Brembo brakes.

The Dark Horse’s hardware isn’t the only thing that will set it apart from the rest of the new ‘Stangs. It’s also a more sinister-looking muscle car. The variant takes the vehicle’s classically inspired, ultra-athletic exterior and adds a number of new design flourishes. These include a more dramatic front fascia with a larger grille opening, a prominent rear diffuser, fixed rear wing, smoked headlights and, of course, special Dark Horse badging. The car rides on 19-inch wheels that wear Pirelli P Zero PZ4 summer tires, but you can also, for the first time in Mustang history, opt for carbon-fiber rims which come wrapped in sticky Pirelli P Zero Trofeo RS tires.

Like the other seventh-generation Mustangs, the Dark Horse features a completely redesigned cabin. It’s more tech-centric, with a 12.4-inch digital gauge cluster in the driver’s cockpit and a 13.2-inch touchscreen infotainment system atop the center stack that runs the automaker’s Sync 4 operating system. The interior also features variant-specific blue accents and dark metallic gloss trim and Deep Indigo Blue seats are available as an add-on.

No pricing information was available as of press time, but the Dark Horse will likely cost more than the current Mach 1, which starts at $56,270. The order books aren’t open just yet, but deliveries of both versions of the variant are expected to begin next summer.

Click here to see all of the photos of the 2024 Ford Mustang Dark Horse.