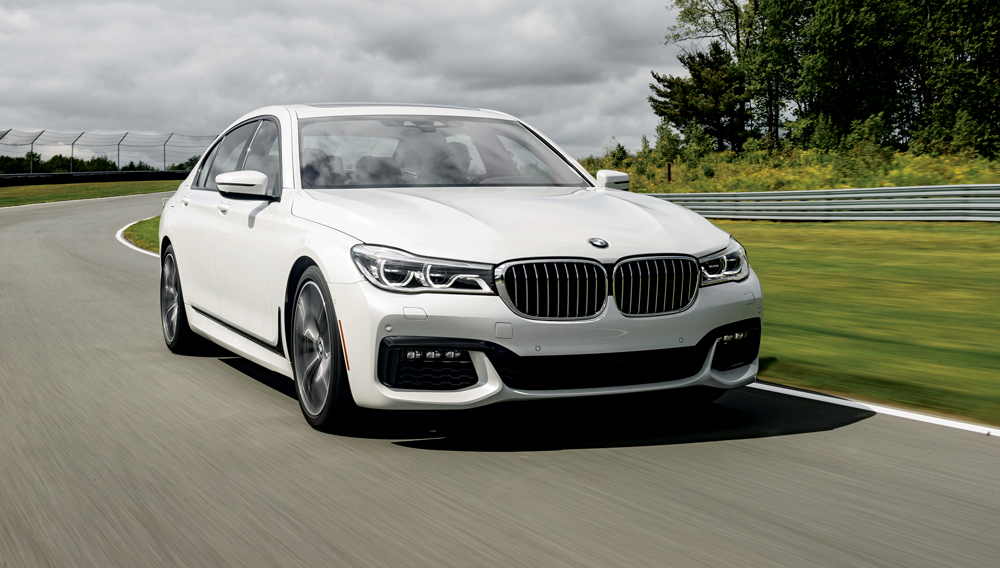 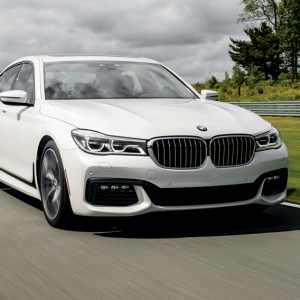 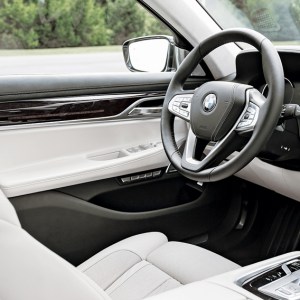 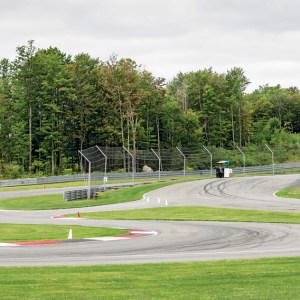 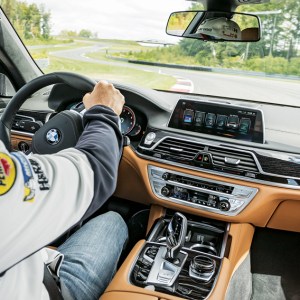 The long-awaited redesign of BMW’s flagship sedan should please drivers and passengers alike.

“You have to be patient.” This is the counsel from my front-seat passenger, the BMW factory racecar driver Bill Auberlen, as we head down the first straight at New York’s Monticello Motor Club in the 750i xDrive, the top-of-the-line variant of BMW’s all-new 7 Series. “Don’t just crank the wheel,” he says. “Anticipate the turn and glide it in.”

The location begs the question of why BMW would bring media members here, to a racetrack, to drive the latest generation of its flagship. You would expect a 17-foot-long sedan to handle the circuit as nimbly and gracefully as a linebacker in full pads performing a sequence from Swan Lake.

Nevertheless, I press the accelerator, tapping into the twin-turbocharged V-8’s 445 hp and 480 ft lbs of torque, and quickly increase the car’s speed as it approaches the braking marker. Then I lift my foot from the gas pedal and squeeze on the brake, making each move a little sooner and a little longer than usual to compensate for the car’s size. As the car bends into the turn, the tires squeal slightly and the body rolls a little, but we sail through with the stability of a barge and the agility of a runabout.

As for the question about the location of this test-drive, the answer is now clear: We are driving the new 7 Series around a racetrack because we can.

It has been seven years since BMW updated the 7 Series, which was first introduced in 1977 and is now in its sixth generation. In the interim, the Mercedes-Benz S-Class underwent a redesign (two years ago) and pulled ahead of the luxury-sedan field with its plush ride and top-of-the line amenities.

In terms of performance, at least, the 7 Series has caught up. The all-wheel-drive 750i xDrive clocks a zero-to-60-mph time of 4.3 seconds. That is a half second faster than the 449 hp Mercedes-Benz S550. The test car also benefitted from the M Sport package, a $3,000 option that includes an aerodynamic kit, a sport exhaust system, and a sport version of the 7 Series’s 8-speed automatic transmission.

The 750i xDrive has a starting price of $97,400. Less expensive and less powerful is the rear-wheel-drive 740i, which has a starting price of $81,300 and is powered by a 3-liter turbocharged inline-6 that produces 320 hp and 330 ft lbs of torque. Its zero-to-60-mph time is 5.4 seconds. Next year, BMW will offer a plug-in hybrid variant, the 740e xDrive, which combines a 2-liter turbocharged inline-4 with an electric motor to produce a total output of 326 hp. It will have an all-electric range of 23 miles.

The 7 Series’s unusual agility for its size is due in part to its relatively light weight. The 750i xDrive weighs 4,610 pounds (which is 20 pounds less than the Mercedes-Benz S550), and the 740i weighs 4,225 pounds. A new passenger cell made of carbon-fiber-reinforced plastic, ultrahigh-tensile-strength steels, and aluminum helps keep the weight down. The doors and trunk lid are among the body panels made of aluminum.

Performance alone, however, will not sell a luxury sedan, and so BMW has also focused heavily on new technology. “Our flagship is the technological benchmark,” says Ian Robertson, head of sales and marketing at BMW. The automaker traditionally has used the 7 Series to introduce new features that later trickle down to other models, including electronic cruise control, adaptive headlights, and night vision with pedestrian detection. The latest 7 Series takes a step closer to autonomous driving with an optional system that will steer, brake, and accelerate automatically at speeds as fast as 130 mph, as long as drivers put their hands on the wheel at intervals no longer than 15 seconds. Another new feature is an optional 3-D-view parking system, which presents a composite image of the vehicle and its surroundings on the central display, making it easier for the driver to slip into the tightest spots. The car is also capable of parking itself, even when the driver is not inside. The action is controlled by an optional display key, which resembles a mini smartphone. This feature is available now in Europe and pending regulatory approval in the United States.

The exterior redesign of the 7 Series is subtle. In a walk-around, BMW head designer Karim Habib points out elements that may otherwise be overlooked. “The car has a lot of surprises you don’t necessarily notice right away,” he says. He notes the broader, horizontal design lines, the wider twin-kidney grille (which houses active shutters that remain closed at lower speeds for better aerodynamics and open when the engine needs extra cooling). A double shoulder line extends from the headlamp cluster to the top of the reshaped tail lamps, accentuating the size of the car’s doors. The 7 Series also features a novel Hofmeister kink, the signature forward curve in every BMW’s C pillar. (The feature is named for Wilhelm Hofmeister, who was the design director for BMW in 1961 when the company debuted it on the 3200 CS and 1500.) For the first time, the kink appears as a single piece. It is an engineering feat, says Habib, that required extensive research.

The redesigned interior of the 7 Series is now cleaner and more refined and includes leather seats embellished with a new diamond-patterned stitching. The optional Interior Design Package includes rich, glossy wood trim and an Alcantara headliner. Habib points out the audio-system volume knobs, which are trimmed with silver-hued metal, and the wood trim above the rear seat-belt anchors on the C pillar. The small things can make a big difference, he says. For nighttime driving, the cabin has ambient lighting that changes color at the touch of a button and an optional sunroof with etches that catch the interior light and create the illusion of a starry sky.

The new center touchscreen is a significant update to the cabin. It enables you to enter navigation information and select other functions much faster than you can with the iDrive rotary knob. (For creatures of habit, BMW has retained the iDrive.) BMW also has improved the voice-activation system, which now offers a faster response time and responds to a more natural vocabulary instead of a rigid set of commands.

Another first is a feature that lets you control certain functions by just pointing your fingers. The driver or front passenger can raise or lower the stereo volume, accept or reject phone calls, and activate a preassigned function by gesturing at the center screen. If the test-drive experience is any indication, the driver has to become accustomed to using the system before it operates flawlessly.

A chauffeured drive through the nearby Catskills in another 750i xDrive provides a chance to sample the model’s limousine features. This car is equipped with the Executive Lounge Seating Package, which includes amenities that Habib says are modeled after a business-class airline seat. The front passenger seat folds forward, giving me plenty of room to use the adjustable footrest. A tray table large enough for an iPad or small laptop folds out from the center console, and small touchscreens from Samsung, used to control various cabin functions, are embedded in the back of each front seat.

The rear seats are broadly adjustable. They are also heated and ventilated and equipped with a massage feature. The massage feels pleasant enough—more of a pressing sensation than a rolling one, like the S-Class’s seats deliver—but it will not take the place of a good session at a day spa. There is no need for an air freshener: The optional Ambient Air package wafts a selected fragrance through the ventilation system.

As with most BMWs, the ride is comfortable but not numbing. The adaptive air suspension keeps the car settled as we traverse weather-beaten roads, but even in comfort mode the 7 Series feels more firmly sprung than the cushiony S-Class. The cabin is also exceptionally quiet, with acoustics optimized for the optional 1,400-watt, 16-speaker Bowers & Wilkins audio system.

If the understated appearance and subtle styling updates on the 7 Series do not immediately impress you, spend some time with the car—behind the wheel or behind a driver. Heed the advice of BMW’s racecar driver and be patient. The car’s charms will reveal themselves soon enough.