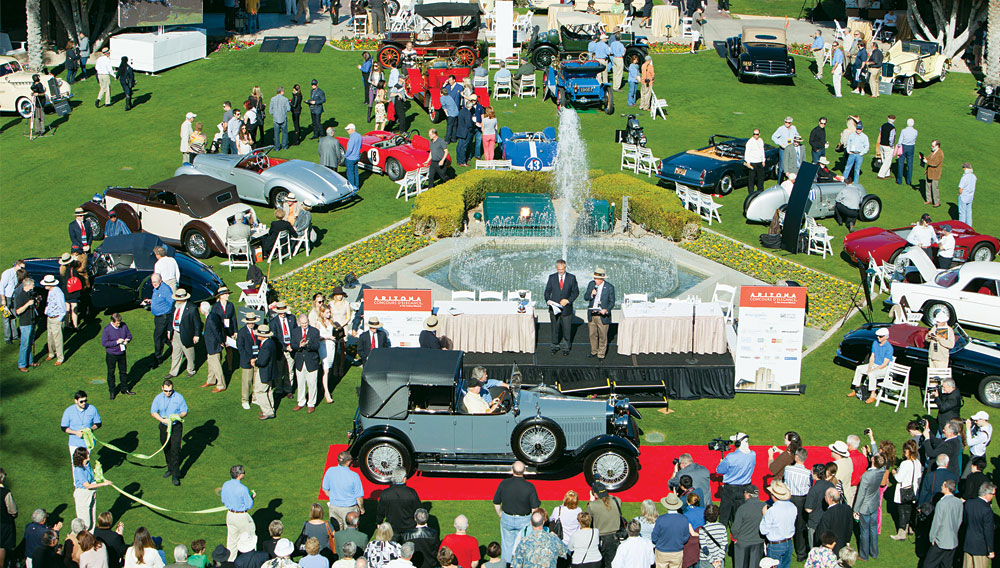 The organizers of the Arizona Concours d’Elegance have huge ambitions for their event, whose inaugural edition was held in January at the Arizona Biltmore resort in Phoenix. “Our goal is that within three years, car owners will be asking, ‘Are you going to the Biltmore this year?’ ” says Kevin Cornish, a Phoenix-based health-care consultant and car collector who is the executive director of the concours. “We want a class win at Arizona to carry the same prestige as a class win at Pebble.”

Cornish is referring to the Pebble Beach Concours d’Elegance, which has long been considered this country’s top collector-car contest, perched a few notches above Florida’s Amelia Island concours, generally regarded as the number-two contest. The Pebble Beach concours, which takes place in August, has been around since 1950; the Amelia Island event, held in March, debuted in 1996. “We intend to make a hard run at them,” says Cornish.

Why not? Phoenix in January seems to be an ideal place and time to stage a world-class concours. (Next year’s edition is scheduled for January 11.) Although lacking the majestic coastlines and beaches of California and Florida, Phoenix—a city surrounded by the raw beauty of the Sonoran Desert—has its own allure. The show’s permanent stage is the handsome Arizona Biltmore, which was designed by a Frank Lloyd Wright disciple, Albert Chase McArthur, and opened in 1929. It has hosted heads of state, captains of industry, and Hollywood celebrities, and it is a year-round destination for golfers.

Phoenix is typically cloudless and warm in January; there are no competing concours elsewhere in the United States that month; and not coincidentally, the Arizona show serves as a prelude to the series of auto auctions in Phoenix and nearby Scottsdale that has become known as Collector Car Auction Week. The concours initially drew the collector-car crowds to Pebble Beach and Amelia Island, and the auctions arrived later. In Arizona, the concours has followed the auctions.

The Phoenix area is rich with well-regarded and visible car collectors, such as Bill and Linda Pope, whose 1937 Maserati 6CM Monoposto Voiturette racecar was a class winner this year. The area is also home to lower-profile collectors with treasures carefully hidden inside nondescript buildings in scruffy industrial parks. These include Scottsdale’s John Konwiser, who owns the only 1907 Panhard et Levassor bodied by the New York coachbuilder Frederic R. Wood & Son. Konwiser brought his Panhard to the event primarily as a community courtesy: He would rather drive the car—locally and often—than show it. “It is much more rewarding for me to stop and talk to people who know nothing about this car,” he says.

Led by John Carlson, whose concours credentials stretch from Pebble Beach to Canada (where he is a Hall of Fame member of the Vintage Car Club of Canada) to Hilton Head, S.C., 43 judges pored over 75 cars divided into 14 classes. Best of Show went to a 1925 Hispano-Suiza Cabriolet de Ville owned by Donald Nichols of Lompoc, Calif. Nichols had the car restored two years ago after discovering it in 1970 in an alley in Sarasota, Fla. The car’s original owner was the industrialist Andrew Mellon.

At the end of the day, literally, the Arizona Concours had drawn enthusiastic applause from the 2,000 attendees, enough of whom carried glasses of Champagne and donned blazers and Panama hats to lend the event an aura of elegance—the kind you find at Pebble Beach.