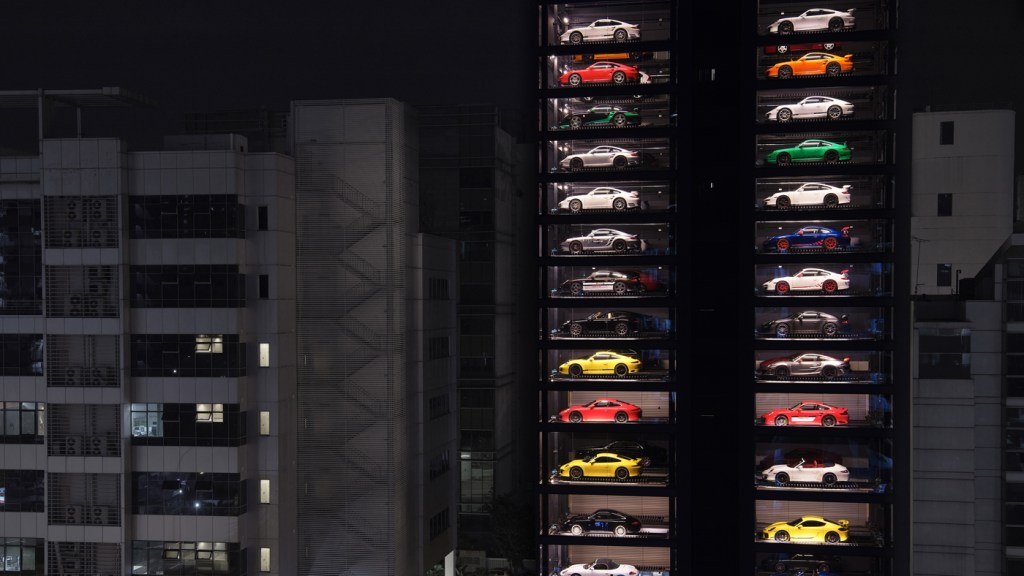 For decades, the toy company Matchbox has sparked the imaginations of preschoolers with their neat store displays of detailed die-cast sports cars and classic sedans. Now, grown-ups can realize the fantasy of picking out their dream car at a real-life Matchbox-inspired showroom at Autobahn Motors in Singapore.

Tucked in the residential neighborhood of Bukit Merah, the vertical pre-owned car dealership lights up to showcase more than 60 luxury vehicles. A family business in operation since 1989, Autobahn Motors opened its new office last December. “Due to the constraint of land in Singapore, we explored the idea of building a basement car park,” says general manager Gary Hong. However, during a trip to a Toys ‘R’ Us store with his son, who wanted Matchbox cars, Hong was struck by the timelessness of the iconic miniature automobile brand’s merchandising design and how easy it was to locate the cars. Hong refined the concept after brainstorming with his architect, and the result is the world’s tallest car vending machine that dispenses high-end vehicles ranging from a Lamborghini Aventador and a Rolls-Royce Phantom Drophead to a Porsche 962 turbo and a rare powder-blue 1955 Morgan.

Pick a car, pick a color, and Autobahn Motor’s automobile vending machine will deliver it at the push of a button.  Photo: Courtesy Autobahn Motors.

With a touch of an iPad button, the dealer can retrieve any vehicle in the 15-story, glass-fronted building. While waiting for their car to be collected—a process that takes about 2 minutes—the customer is shown a video that introduces the model of the car. “We want it to be a sensory experience that includes sight, sound, touch, smell, and taste,” says Hong. “The sound system is set up so you can feel the base while watching the video.” The scent piped into the showroom was specially curated from a French perfumery, and Hong hopes to introduce the “taste” component in the near future. “We’re thinking of offering wine to classic car buyers and whiskey to sports car enthusiasts,” he says. Once the car arrives on the ground floor, it rotates on a turntable illuminated by spotlights.

The innovative idea has since garnered worldwide attention, and Hong says Autobahn Motors plans to offer consulting services to companies interested in a similar model.