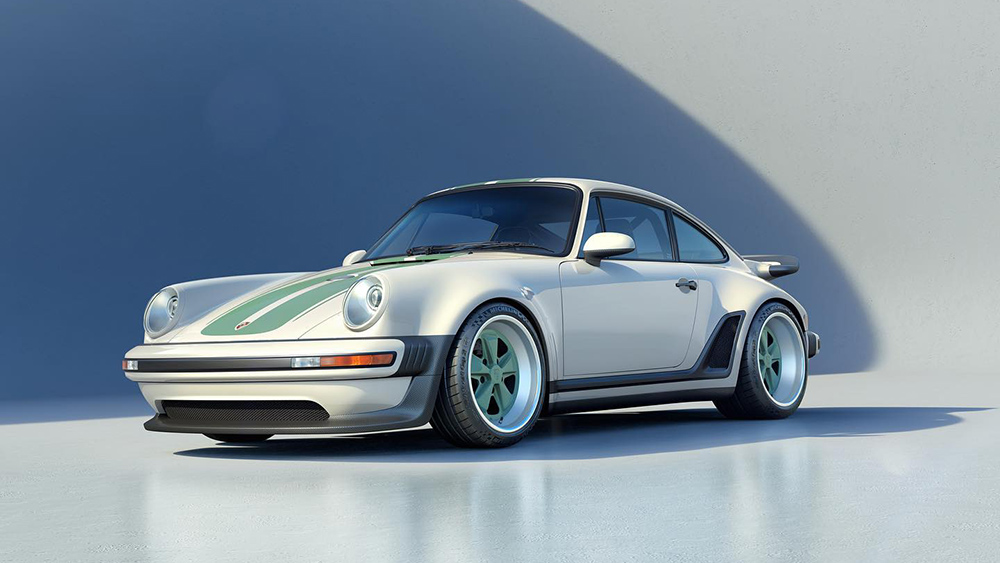 On Wednesday, the restoration house revealed the latest model from its Turbo Study program. Through the offering, owners can customize a 911 to their heart’s desire. Earlier this year, that resulted in a Wolf Blue car focusing on grand touring. Now the latest model is leaning into the vehicle’s sportier side, with a Turbo Racing White body and mint-green racing stripes all the way down the top.

“This specification underlines the wide range of high-performance capability enabled by the study—from refined grand touring to visceral sports focus,” the company said in its announcement.

A look at the rear view  Singer Vehicle Design/Facebook

Of course, you want a sporty car to reach sporty speeds, so the new 911 features a power increase to 510 horses from the previous version’s 450 hp, according to Road & Track. That comes from the 3.8-liter, twin-turbocharged, air-cooled flat-six, which also has air-to-water intercooling. Meanwhile, the suspension has been sport-calibrated and the ride height has been lowered and stiffened for better aerodynamics and handling.

On the outside of the vehicle, you’ll find lightweight carbon-fiber bodywork and visual carbon-fiber elements on the front splitter, the shark-fin intake and the whale-tail spoiler. Both the rear bumperettes and rear wiper have been removed, helping to emphasize the back’s extra track width. Singer has also added its signature center-mounted fuel filler, which was missing from its earlier 911 restomod.

A peek at the funky interior  Singer Vehicle Design/Facebook

Inside, the car is decked out in a funky bespoke houndstooth “Grun” cloth that matches the minty color on the exterior. Up front, there are lightweight carbon-fiber seats, while a roll cage has taken the place of the typical rear seats. Elsewhere, you’ll notice lightweight door trims, painted interior surfaces and carbon-fiber accents on the instrument panel.

Singer noted that the new 911 highlights the wide range of personalization available through its Turbo Study program, so if you’ve been looking to drive something that truly no one else has, now’s your chance to make that happen.