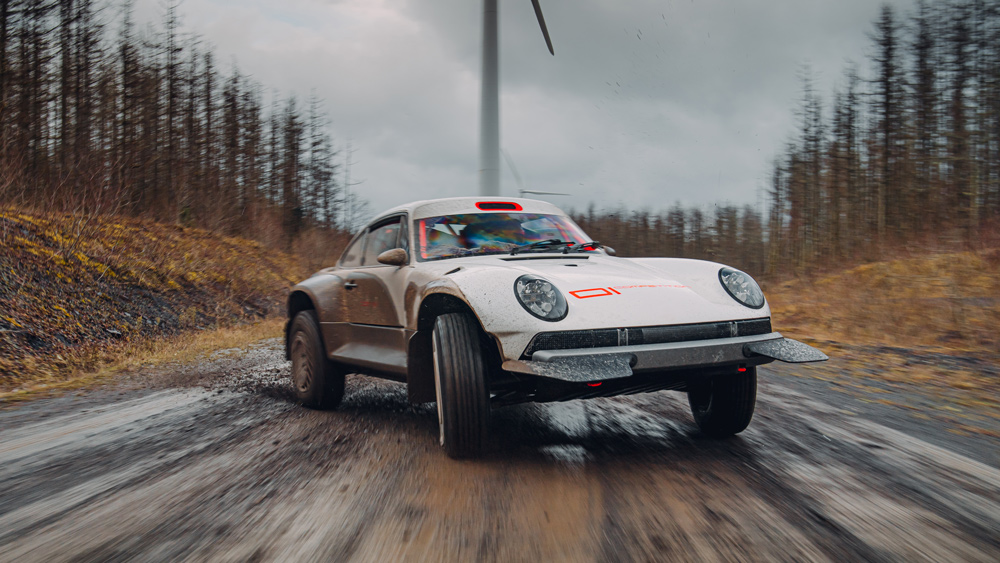 Singer Vehicle Design made its name by reimagining the Porsche 911, but after debuting the results of its Dynamics and Lightweighting Study in 2018 it seemed the company had found the outer limit to just how far it could push the model in terms of performance and design. Turns out, there was still more to come. This morning, Singer unveiled the culmination of its second major client-requested research and development project, the All-Terrain Competition Study (ACS), culminating in 911 rally racers reborn to tackle Dakar or Baja.

“We at Singer are motorsport nerds in our hearts and demonstrating our understanding of the discipline required our off-road vision to display deeply legitimate competition credentials from the structural engineering, to the bodywork ethos, to the mechanical package,” said Rob Dickinson, Singer’s founder and executive chairman, in the official announcement. “So much of what we’ve done for the last decade has been inspired by Porsche’s competition success and the All-terrain Competition Study provides us the opportunity to showcase that idea literally and vividly.”

While influenced by the Porsche 911 SC/RS examples campaigned by the likes of Rothmans in the World Rally Championships (WRC) of the 1980s—Rothmans won 12 prominent rally races in 1984 and ’85 alone with the model—Southern California–based Singer selected the 1990 Porsche 964 platform for the ACS-modified vehicles.

Crucial to the process was Singer’s collaboration with rally expert Richard Tuthill and his team, winners of the 2019 East African Safari Classic as well as numerous other top finishes in the sport. Tuthill, whose facility is in Oxfordshire, UK, also worked on the original Rothmans cars back in the day.

Presenting a substantially elevated ride height, the permanent all-wheel-drive coupe with plated limited-slip differentials is powered by an air-cooled, 3.6-liter twin-turbo flat-six engine mated to a five-speed sequential transmission. Singer claims output begins at 450 hp and 420 ft lbs of torque, but varies depending on the intended form of competition. Beneath the carbon-fiber body panels lies a bolstered monocoque chassis, a long-travel suspension system with five-way adjustable dampers (two per corner) and an enlarged fuel tank.

“It was really the chassis development that took a while,” said Singer CEO Mazen Fawaz during a conversation with Robb Report about the study, which was roughly three years in the making. “Richard [Tuthill] led that. And then you have a body structure that needed to be designed, and that’s a process that Rob [Dickinson] led. This is not just a 911 with a roll cage. We knew we had to go big. We don’t really do trendy. We had to do something that’s going to be a competitive off-road desert racer. Fully engineered, it’s like a WRC racing car with some trophy truck in it.”

And Fawaz should know, as he’s raced trophy trucks with Formula 1 driver Jenson Button’s team, Rocket Motorsport, and plans to do so again this season. Testing of the ACS-modified Porsches will be done with a team consisting of Fawaz, Tuthill, Le Mans veteran Marino Franchitti and automotive consultant Chris Harris.

According to Fawaz, the car’s first official event will most likely be the National Off-Road Racing Association’s Yokohama Mexican 1000, in April. Once delivery of the two vehicles—one in Parallax White and the other, tailored more to paved explorations, in Corsica Red—is made to the commissioning customer, the ACS package will be available to other Singer clients, with pricing determined by the extent of modifications desired. Each example will be completed in the UK and comes with the option of racing support from Tuthill and crew.

Talking about the first car produced, Fawaz sounds like a proud parent. “It’s this perfect balance of heritage and capability, and there’s no shortcut on it—it’s very Singer,” he says. “In our heads, we wouldn’t change it. And when you get there, it’s very exciting.”