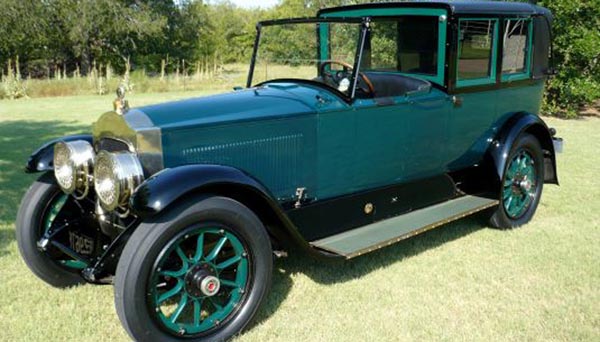 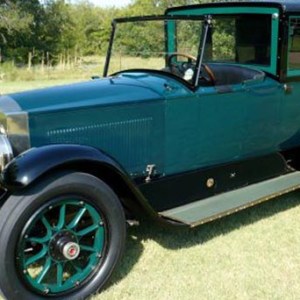 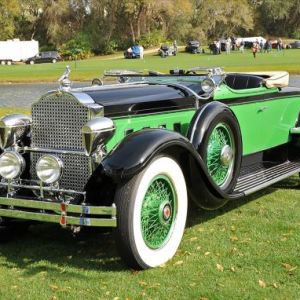 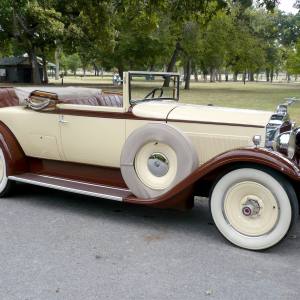 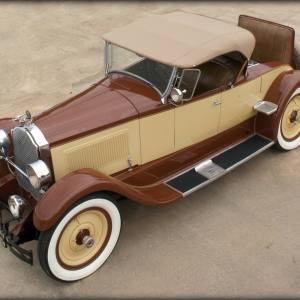 Six Packards have been added to Leake Auction Company’s Dallas auction line-up. A 1929 Packard 645 Roadster, a 1930 Packard 733 Convertible and a 1919 Packard Twin Six 3-35 Custom Brougham Landaulet will be part of the Platinum Series of cars scheduled to cross the auction block on Saturday, November 22 in Dallas Market Hall.

A 1929 Packard 645 Roadster will highlight this extraordinary group. For the 1929 New York Auto Salon, something special had to be built. While Packard had a close relationship with Dietrich, for this job, they turned to America’s premiere custom body firms, Rollston Coachbuilders. A special one-off roadster was commissioned. Rollston was known for over-engineering because they used the finest materials, techniques and beautiful styling. Packard looked to this firm for many of its finest creations including this outstanding roadster. While this sporty roadster looks quite similar to the custom roadster Packard offered from Dietrich, this example appears more streamlined with the front cowl contours flowing from the tops to the sides in a sweeping appearance and a Rollston exclusive with the padded interior cowling spilling over the upper edges of the doors. This unique Rollston roadster represented the ultimate in classic sporting design and mechanical achievements.

Formal and custom cars of this era are often thought of as being in nothing but conservative dark tones, but when this car was born, Packard was advertising nearly all of their custom bodies in a bright array of colors, such as the scheme used on this beautiful roadster. Treated to a full restoration, it features a 384 CI, straight eight engine. Finished in a lush green with black fenders and accents, the interior replicates these color selections in the finest materials just as used when it made it appearance in New York some 85 years ago. Among the many unique touches are the dual step-plates, one on each side, allowing access to the rumble seat, a fold-down rear trunk rack plus enclosed dual side-mounted spare tires. Adding to this car’s already stylish appearance are very rare original Woodlites headlights and a fully operational pair of Pilot-Ray lights. This Packard has appeared in several concours events and received a first place award from the CCCA and is an AACA Senior Winner.

Other notable Packards in the auction are:

These Packards and many other impressive vehicles will be on display and up for auction in Dallas Market Hall, November 21-23. Admission is $15 for adults, $10 for senior citizens and military personnel with an ID and $7 for children under 12. Doors open at 9am daily. The auction will start at noon on Friday, 10am on Saturday and 11am on Sunday. For a complete list of vehicles in this auction, visit www.leakecar.com.

Leake Auction Company was established in 1972 as one of the first car auctions in the country. More than 40 years later the auction company has sold over 34,000 cars and currently operates auctions in Tulsa, Oklahoma City and Dallas. Recently they have been featured on several episodes of three different reality TV series – Fast N Loud on Discovery, The Car Chasers on CNBC Prime and Dallas Car Sharks on Velocity.