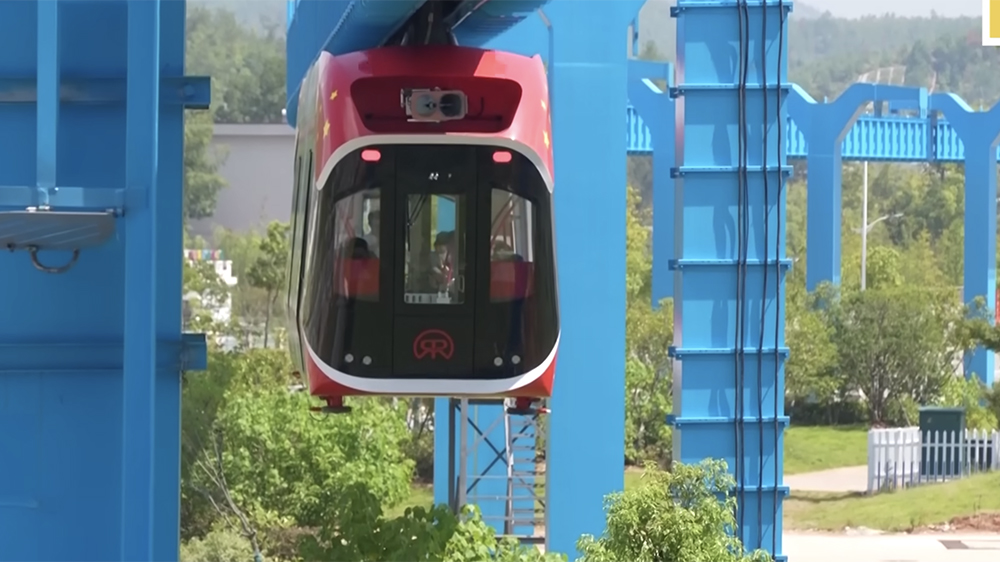 The country has just unveiled Red Rail, the world’s first suspended maglev train, reports the South China Morning Post. Unlike other similar trains, it uses permanent magnets instead of electromagnets, allowing it to levitate on its track even without a power source.

Red Rail is located in Xingguo county, Jiangxi province, in southern China. The experimental train rides along a track suspended 33 feet in the air by a steel structure and looks just like any other elevated maglev train—only flipped. Instead of riding on top of the track, it travels underneath it, leading some to dub it a “sky train.”

That isn’t even the Red Rail’s most unique feature. Previously, maglev trains used two sets of electromagnets to create the force needed to propel them at great speeds. China’s sky train, on the other hand, uses permanent magnets rich in rare earth elements to produce a constantly repelling force strong enough to lift an entire train car off the track. The friction-free conditions created by the system mean that the vehicle can be kept floating indefinitely, even without power. The train is able to glide along its track silently at speeds of up to 50 mph.

China recently began testing Red Rail on a half-mile track. Currently, it features two cars and can carry up to 88 passengers at a time. Once this first phase is complete, the vehicle will be tested on a 4.7-mile track. The extra space will allow Red Rail to reach speeds of up to 75 mph.

Unfortunately, as promising as suspended maglev technology may sound, it may only be possible in China at the moment. That’s because the country is easily the world’s leader in rare earth elements. It is home to nearly 40 percent of the world’s known reserve of the materials needed to make the train’s permanent magnets, according to New Atlas. That’s twice as much as the country in second place, Vietnam. Such is China’s dominance, that six state-owned companies were responsible for processing 85 percent of the world’s rare earth elements in 2020.