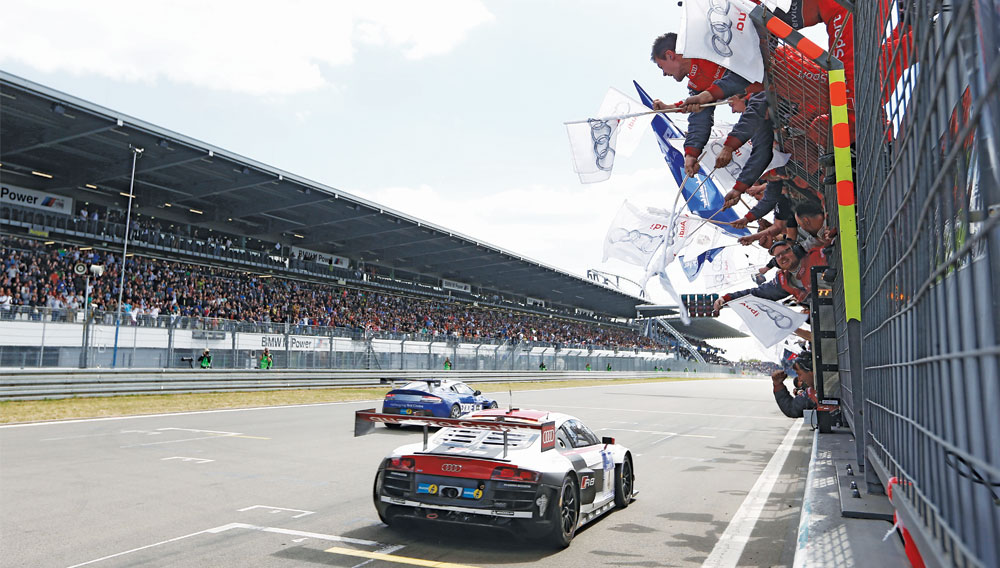 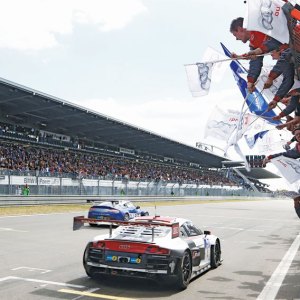 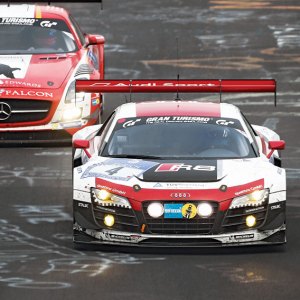 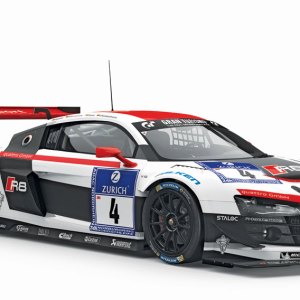 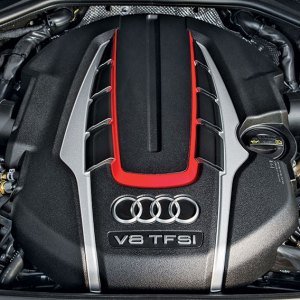 The Audi R8 LMS Ultra racecar that won the most recent edition of the 24 Hours Nürburgring endurance race has much in common with the R8 V10 sports car from which it derives.

It would be an understatement to say that 2014 has been a good year for Audi. For the 13th time in 15 years, an Audi won the 24 Hours of Le Mans. During this year’s race, in June, Audi Sport Team Joest’s R18 E-tron Quattros sped to a one-two finish. A week later, Phoenix Racing’s R8 LMS Ultra took first place at the 24 Hours Nürburgring, completing an Audi sweep of the two endurance races.

Audi has been sweeping up customers, too, having sold nearly 1.6 million cars worldwide in 2013. While Audi is the No. 1 luxury-car brand in China, Germany, and Europe overall, its sales lag behind those of Mercedes-Benz and BMW in the United States. It sold about 180,000 cars here in 2013, while the other two German brands each sold roughly 300,000. Nevertheless, Audi has long had a following among Robb Report’s editors, and the brand’s R8 series of sports cars has been a perennial favorite with our Car of the Year judges—and other U.S. drivers. The company builds about 2,500 examples of the R8 annually for the worldwide market, and half of them are delivered to the United States. Meanwhile, Audi’s S8 continues to raise the bar in the luxury sport-sedan segment (see “Driving the S8 in Its Natural Habitat”).

Audi officials invited Robb Report to join them at this year’s 24 Hours Nürburgring, where the field of about 175 cars included 15 Audi racecars: eight examples of the R8 LMS Ultra and seven of the TT-RS. The modern grand prix circuit incorporates the Nordschleife, the track’s north loop, which the racing legend Jackie Stewart dubbed the Green Hell because it is so demanding of drivers. The Nordschleife, which is nearly 13 miles long and includes more than 1,000 feet of elevation changes, is the yardstick by which every production car with sporting pretensions is measured. The elapsed time in which a car completes this torturous course determines its ranking on a globally recognized performance scale that is timed to hundredths of a second.

My host for the race weekend was Mark Dahncke, senior manager of product and motorsports communications for Audi of America. At dinner on Friday before the commencement of the race the following afternoon, we were joined by Dahncke’s colleague in Germany Stephan Reil, head of development at Audi Quattro, the division of Audi that builds the brand’s R8 and high-performance RS series cars, as well as the R8 LMS Ultra and TT-RS racing models. Reil is essentially the technical director responsible for development of all RS models and the R8. “The R8 is a lighthouse at Audi—an icon,” he said of the sports car. “With it, you build the story of your company.” Reil, who is soft-spoken yet passionate about his job, would get about three hours of sleep over the weekend.

Also joining the dinner was Romolo Liebchen, head of Audi Sport Customer Racing, which develops and provides technical support for R8 LMS Ultra racecars such as the one that would presently take first place ahead of cars from Aston Martin, BMW, Mercedes-Benz, Porsche, and others. During dinner, Liebchen seemed unusually calm for a man who would soon have millions of eyes on his cars.

He explained that Audi customers with racing aspirations can buy an R8 LMS Ultra to compete in the Group GT3 (also known as Grand Cup Touring) competition for roughly $450,000. About 1,000 cars representing 14 marques compete in the GT3 class. Audi has built 132 examples of the R8 LMS Ultra, enabling it to claim the largest market share in GT3 of any manufacturer.

One reason for the popularity of the R8 LMS Ultra may be its similarity to the street car from which it derives, the R8 V10. Audi Quattro builds the racecar using more than half of the R8 V10’s production parts in its manufacture, including the same engine and aluminum frame. One of the few alterations to the R8 engine is the removal of the shaft for front-wheel drive; the R8, like all Audi production vehicles, features the brand’s Quattro all-wheel-drive system, but GT3 rules require that cars racing in the R8 LMS Ultra’s category have rear-wheel drive. The air-conditioning compressor and the emissions equipment are also left off of the production-line engine. The chassis differs only in the addition of pneumatic jacking points and a roll cage.

The R8 engine is powerful, and it has also proven to be reliable and durable: Its service interval is nearly 12,500 miles. Indeed, the engine in the car that would win the weekend’s 24-hour race would not be rebuilt for its next outing.

“Today the expectation in racing is that the car will not break—just the racing gearbox, which differs from the production version in having straight-cut gears, is the weakest link,” said Reil. “In principle, the R8 [LMS Ultra] is a very reliable racecar, and it’s very unusual that there are any technical failures, but there are no guarantees.”

When asked how racing today differs from racing in an era of less-advanced technology, Reil said, “Twenty years ago, you had an endurance strategy. Now, it’s more or less a 24-hour sprint race.”

Liebchen added, “Racing is a good business only if you are linked to good sponsors and drivers who can go fast.”

By 4 pm Sunday, the R8 LMS Ultra campaigned by Phoenix Racing (which is based nearby in Meuspath, Germany) had won the race. The team also drove an R8 LMS Ultra to victory at the 2012 edition of the Nürburg­ring race. This year’s car was driven by the quartet of Christopher Haase, Christian Mamerow, René Rast, and Markus Winkelhock. Their #4 car was the front-runner in 102 of the 159 driven laps and maintained the lead from lap 103 to the finish line.

During Haase’s break about halfway through the race, he spent a few minutes with us in the Audi hospitality tent. Regarding his strategy for a race such as the 24 Hours Nürburgring, the young driver said, “In a sprint race, there is no time to relax—push every corner, each lap. In a 24-hour race, you think a bit more, find a way to overtake flat out in the last third, like a sprint.”

When asked about a driver’s need to possess technical and engineering knowledge, Haase’s answer was clear. “A mechanical background helps,” he said, “but if you drive fast, it doesn’t matter. As soon as you enter Nordschleife, it’s all about the track.” He was also clear about his objective: “I want to win the races, and I know I can do it with the Audi.”

Driving the S8 in Its Natural Habitat

Upon my arrival in Frankfurt to attend the 24 Hours Nürburgring and meet with Audi officials, I received the keys to an Audi A8 L from Mark Dahncke, a manager of Audi’s U.S. communications department, and we headed to the autobahn. The big, comfortable sedan made quick work of the 100-mile drive from the airport to Nürburg. There I traded keys for the new S8, a high-end performance sedan that is priced from about $115,000 and is as well bred as its A8 luxury-sedan sibling.

The S8—a relative lightweight at 4,685 pounds—is a potent machine cloaked in an understated, elegant exterior that is taut, athletic, and without a single gratuitous embellishment. The prominent and imposing grille, full front and rear LED lighting, and quartet of fat exhaust pipes only suggest its capabilities, which are indeed impressive. The car’s 4-liter twin-turbocharged V-8 develops 520 hp and 481 ft lbs of torque, enabling it to move like an enraged rhino. With a zero-to-60-mph time of about 3.9 seconds, the S8 deserves to do more than traipse around town or spend time in the valet lot.

The interior of the S8 can include rich brown Valcona-leather seats with diamond stitching that would be at home in any Bentley, but the real luxury was being able to blast down the autobahn at nearly 140 mph—legally—on the return trip to Frankfurt. The rock-solid S8 felt safe and performed effortlessly. The same good genes that put the R8 LMS Ultra on the podium at the Nürburgring make the S8 a winner, too.