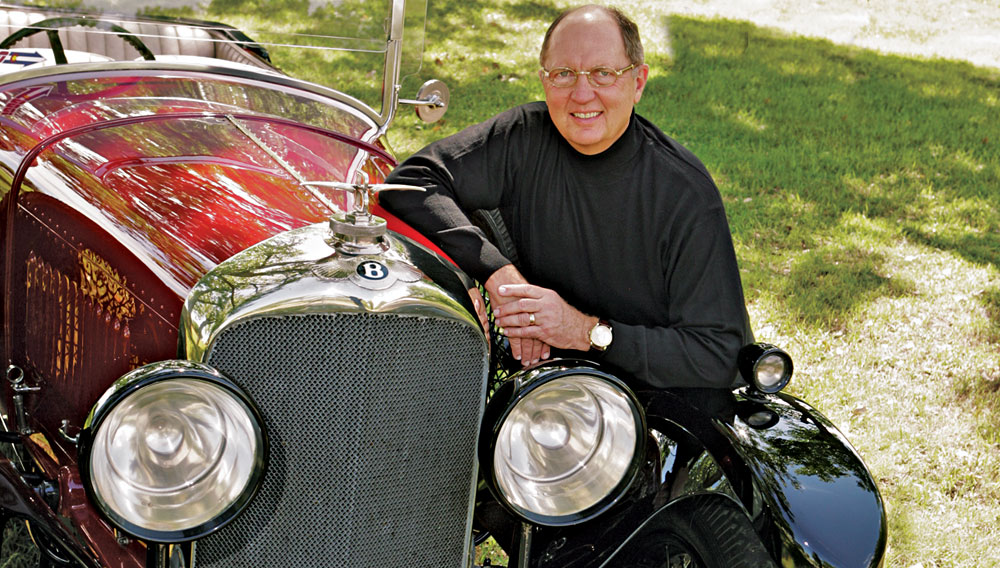 When speaking of his car collection, Roger Morrison refers to himself as the autos’ custodian, not their owner. Collector cars can offer history lessons, he says, so he feels a responsibility to preserve them. The collection under his care numbers about two dozen, including veterans, old Fords, European and American sports cars, and historically significant hot rods.

A meticulous researcher, Morrison has produced documentaries about his hot rods. Other vehicles of his have earned best-in-class awards at the Pebble Beach Concours d’Elegance. “Sharing the cars with others and participating in events are two highlights of collector-car ownership,” says Morrison, who—with his wife, Sissy—frequently drives the vehicles in rallies.

Morrison, who is as modest as he is congenial, is a noted concours judge and the president of the Silver Ghost Association, a club of Rolls-Royce owners that has no judged events and, according to Morrison, emphasizes “building friendships.” He is also a longtime supporter of McPherson College, located in McPherson, Kan. Not far from the college is Morrison’s home in Salina, where he operates a business that, among other ventures, owns grain elevators.

He is a leader of the advisory board for the college’s auto-restoration program. When he began his tenure with the board 14 years ago, the department offered a two-year course of study and included just 20 students. Now, McPherson is the country’s only liberal-arts college offering a bachelor of science degree in automotive restoration.

“My mom told me the first words I said were car and truck,” says Morrison, who has four grown children of his own and nine grandchildren. He began what can be considered his first hot-rod modification when he was 13. “It was a hand-me-down ’52 Plymouth from my aunt. My dear parents let me put it in our one-car garage, and I went out in the dead of winter and polished and repolished it. When the arrival of money and the JC Whitney catalog coincided, then I made the next modification. That little Plymouth coupe went through the whole thing. That was my first car.” —Robert Ross

For my collection, I choose cars that are significant within their era of production. To drop a name, racing legend Phil Hill told me some years ago, “A car that was great in its day will be great in any day.”

I just happen to like the history of the Ford Motor Company and the family, and so I have some examples of what I think are their landmark cars. These include a 1932 Roadster, a 1934 Victoria, and a 1947 Woodie wagon that belongs to my wife, Sissy.

A car must be identified with its designer or maker. My interest in the inventor, the progenitor, applies to Henry Royce and the Silver Ghost as well as it does to Pat Berardini and the 404 Roadster. These cars bear the personal stamp of the designer, the creator, the manufacturer, and in many cases the subsequent owner. We’re enjoying today the manifestation of somebody’s dream that came to life in steel and rubber and leather.

A car also should have a fun, interesting history, preferably with documentation. And it needs to be event-eligible. Club support is important; you need to find like-minded enthusiasts whose company you and your spouse will enjoy.

Access to specialists and the availability of parts for major projects—combined with the car’s having some degree of dependability and serviceability—are requirements. And the car must be able to run at least midpack in a rally with other collector cars, without suffering any major strain.

The hot rod played an important role in motorsports and the American performance-car culture. I have four criteria for restoring a historic hot rod: The car must have done something important in its day—won races or won shows; it must have been pictured in magazines of its day; it must have independent documentation, such as family photos and home movies; and the owner/driver/builder must be alive at the time of my purchase—to aid in the restoration from personal documentation and memory. But most important—my main motivation—is honoring the creator’s innovation and risk taking.

With the help of Dave Crouse and his crew at Custom Auto in Loveland, Colo., I’ve had four cars that meet these criteria restored: Reid and Don Pate’s 303 Competition Roadster, which was built in 1953 with a Model T Roadster body and was arguably the first successful mid-engine drag car; Bud Neumeister’s 1928 Ford Model A Roadster, which was the subject of a two-issue feature in Hot Rod magazine in 1954; Paul Harris’ 1932 Ford Roadster in which, at age 21, Harris achieved 131 mph at Bonneville; and Pat and Tony Berardini’s 404 Junior 1932 Ford Competition Roadster, with which Pat claimed the A Street Roadster class points championship from 1950 through 1955.

Four of the gentlemen who made these cars saw them finished before they died. Two are still alive; whenever the restored cars appear at events or are written about in magazines, they enjoy the recognition and notoriety that they so justly deserve.

Prototypes, one-offs, and show cars are worthy of collectors’ attention for the obvious reasons, but especially because documentation is often easy and possibly extensive. I am a great believer in the importance of documentation for current and future value.

The good news is there are collector cars with bright futures in virtually all price ranges. The lower-priced cars are the ones that had mass appeal when they were new. Their prices have been steady, with minimal fluctuations. These cars have club support and available parts. They are easy to maintain, and they can be driven. Examples include the early Mustangs, the Shelby Mustangs and Shelby Cobras, the 356 Porsches (which have a wide price range), and certain Alfa Romeos, MGAs, and MGBs.

Giving Up the Ghost

The last car I’d sell is either the 1912 Rolls-Royce Silver Ghost, the 1949 Jag XK120, or the 1929 Bentley 4½. The Bentley is a showroom stock model—pretty subtle compared to the flashier Le Mans bodies on many restored 4½ models. All three of these cars are usable and have great event eligibility.

I guess the last car I’d sell would be the one that I can ride and enjoy the most. That might be the Bentley. Vintage Bentleys kind of go wherever they want. They’re eligible for more types of events than just about any other car.