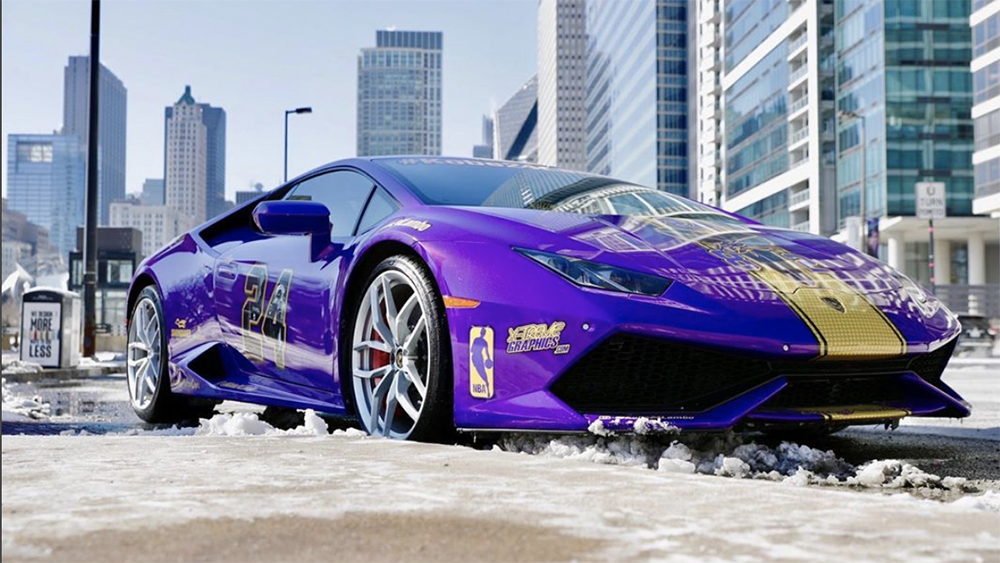 Grief takes many forms, and one Kobe Bryant megafan expressed his by turning his Lamborghini into a mobile memorial for the late Lakers legend.

Joe Carbonara modified his 2015 Lamborghini Huracán with images of Kobe Bryant and his daughter, Gianna, after being devastated by their tragic deaths in a helicopter accident in late January. Now, the car is going up for sale for $170,000.

To make the transformation, Carbonara took his formerly silver ride to X-Treme Graphics, a shop in Chicago that specializes in this kind of refashioning. According to TMZ, the owner, Steve Zielinski, was so enthusiastic about the prospect that he took a full two days to cover the vehicle in the Laker’s purple-and-gold color palette.

“I had to make sure it was good and not overdone,” Zielinski told the website. “And, we didn’t charge for it.” Bryant’s various jersey numbers, logo and the names of the others killed in the helicopter crash are also included as part of the elaborate motif. The car, now officially known as Kobe24Lambo, gained wider notoriety when it was seen on the streets of Chicago during the recent NBA All-Star Weekend.

According to Carbonara, he’s received many offers for the car to appear in music videos or at special events. Nothing has been finalized as of yet.

But not every observer seems as enthusiastic about this project as Carbonara. One commenter on TMZ’s website stated flatly, “Using Kobe’s death is a really sleazy way to sell a car.” Another wrote, “Nice money grab.” Carbonara admitted he was trying to unload the car prior to wrapping it with the new Kobe-inspired design. While that timing has clearly rubbed some the wrong way, we’re betting that it won’t stop a diehard Mamba fan from snapping it up.