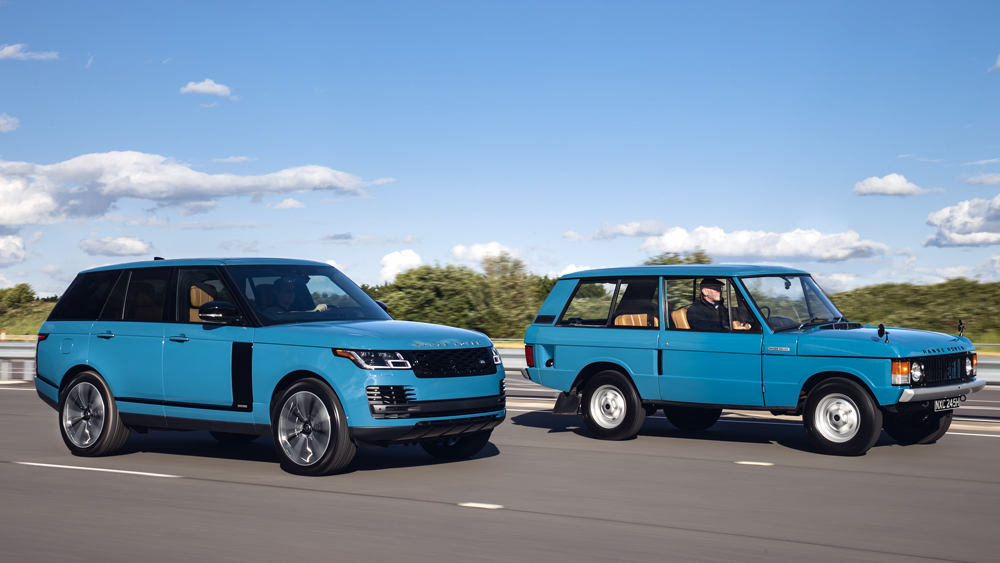 It’s hard to believe that the ever-popular Range Rover is 50 years old. Introduced in 1970, one of the most iconic of SUVs celebrates the milestone with a special-edition variant that will be limited to 1,970 examples for the world.

The Range Rover Fifty is offered in long- and short-wheelbase options, and starts with the luxurious Autobiography to which are added some bespoke exterior accents, including two available 22-inch wheel designs. Exclusive “Fifty” script appears on the exterior, as well as inside on the illuminated treadplates, headrests and dashboard. And a special “1 of 1,970” badge distinguishes the center console. In the fashion of every Range Rover Autobiography, the capacious cabin features plenty of leather and fine finishes. Under the hood is a 510 hp, 5.0-liter V-8 engine that makes the big British SUV a genuine performance machine.

The Range Rover Fifty in Tuscan Blue, one of the original colors available when the model was introduced in 1970.  Photo: Courtesy of Jaguar Land Rover Automotive PLC.

The story of the Range Rover began in the mid-1960s as Land Rover conjured a vehicle that would combine the comfort of the Rover sedan—a very posh car in its day—with the all-terrain capability of the indefatigable Land Rover. The first-generation Range Rover debuted as a two-door model.

Interestingly, a year after the Range Rover was introduced, the original Land Rover Classic (the tin box that made the company famous) became the first vehicle to be displayed at the Louvre Museum in Paris as an “exemplary work of industrial design.” As for the initial generation of Range Rover, it continued production through 1996, with a four-door version coming on in 1981.

The special-edition Range Rover Fifty followed by an example of the original model from 1970.  Photo: Courtesy of Jaguar Land Rover Automotive PLC.

The second generation was launched in 1994 and, with a more opulent interior and V-8 engine, cemented Range Rover as the high-end SUV to beat. By 2003, the third generation came about, with its yacht-inspired interior that upped the ante even further. Made through 2012, it was followed by a fourth-generation successor that was an all-new vehicle, and also the first SUV to incorporate lightweight all-aluminum construction. For the last five years, the SVAutobiography, produced by Land Rover’s Special Vehicle Operations division, has represented the pinnacle of the Range Rover model’s current lineup, one that now includes the Fifty edition—at least for a limited time.